Kerry Brown reviews The Killing Wind: A Chinese County’s Descent into Madness during the Cultural Revolution by Tan Heçheng

Home>Berkshire Bookworld>Book reviews>Kerry Brown reviews The Killing Wind: A Chinese County’s Descent into Madness during the Cultural Revolution by Tan Heçheng
Previous Next

Kerry Brown reviews The Killing Wind: A Chinese County’s Descent into Madness during the Cultural Revolution by Tan Heçheng

It is a sultry early autumn day in the central province of Hunan in China, half a century ago in 1967. In a small cluster of villages, remote from the main political centre in Beijing, life revolves around farming, tending animals, just making a basic living. But for a couple of weeks, from around the 20th of August, the market places, and the areas by the rivers and fields, are the scenes of a new kind of activity – the brutal slaughter by neighbours, relatives and friends of people from within their communities. The spate of daylight murder ends as abruptly as it had begun. 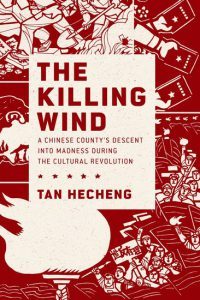 It is hard to exaggerate the force of Chinese journalist Tan Heçheng’s The Killing Wind (Oxford 2016). Firstly, this is by someone who, eerily, has visited the township of Daoxian which is the focus of his study only a few weeks after the murders had happened. As a young man in the early period of the Cultural Revolution he had come to this area with a friend. Of course, he had no awareness then of the events that had just happened. His description of the unsettling silence of the place he looked through, a place that he was to study so deeply decades later, is highly symbolic. National leaders like Hua Guofeng, then a province level party boss in Hunan, were to demand when news started to trickle out about the murders that it was best just to let them fade from memory. That tactic evidently has not worked. Tan’s book lets the brutality and senselessness of this case of auto-genocide scream from the pages. Reading it in a cafe in Taipei, I had to often simply look up from the printed words and take a deep breath. This is not a book for the faint hearted.

This is particularly the case because of the understated mode of presentation. Tan sets out the localities, the numbers involved, the dates, specific times, and the ways in which people were executed, with meticulous precision. He doesn’t embellish or dramatize. He simply states how some of the victims met their end. But that gives this work even greater weight and authority.

One of the characteristics of a lot of scholarship on the Cultural Revolution, the epic mass movement that swept China from 1966 for a decade until Mao Zedong’s death, is that it either over-prioritises politics, or elite power struggles, or simply presents a catalogue of misdeeds in which culprits are anonymous. There is little attempt to address the question of agency – of why people did what they did, and what it actually meant within communities that were effected. These criticisms cannot be made of this book. It is scrupulous in naming the perpetrators, and even in trying to track them down decades later and find out how they now understand their actions back in 1967.

What is clear, after reading through Tan’s testimony, is the complexity of the movement – the ways in which some figures were simply manipulating the opportunity of the Cultural Revolution to fulfil vendettas against their neighbours or relatives. Others truly did believe the narrative of the cleansing class struggle at the time. As with Nazi Germany, ideas of horrifying simplicity took a hold on society, and led to actions of inhuman brutality. The chapter on the treatment of women is particularly hard to contemplate – both due to the gang rapes that happened, the utterly barbaric ways in which some were executed (impossible to properly repeat here) and the incomprehensible ways in which some of the women survivors were forced to marry the very people that had slaughtered their husbands and children and start new lives with them.

It would be hard to recommend this book more. In taking the Cultural Revolution, with all its strangeness and immensity, down to the level of a particular community, with particular named figures and the real actions they were involved with, it makes the history of this era look very different. This is finally a truly remarkable testament to the ways in which Chinese historians, working within China, have been able, despite all the restrictions and restraints there, to write some of the most amazing, powerful material. A truly remarkable book.