Berkshire Publishing was founded in 1998 as Berkshire Reference Works by publisher and author Karen Christensen, who had begun her career in London, and anthropologist David Levinson, who had been at Yale University for 20 years. In early days, Berkshire was an academic reference book producer, developing encyclopedias for Scribners, Routledge, Sage, Macmillan, H.W. Wilson, and ABC-CLIO. Later, as Berkshire Publishing Group LLC, the independent Berkshire imprint was launched with the award-winning Encyclopedia of World History, now in a second edition and being translated into Chinese. The company is owned by Karen Christensen and operates internationally from Great Barrington, Massachusetts. 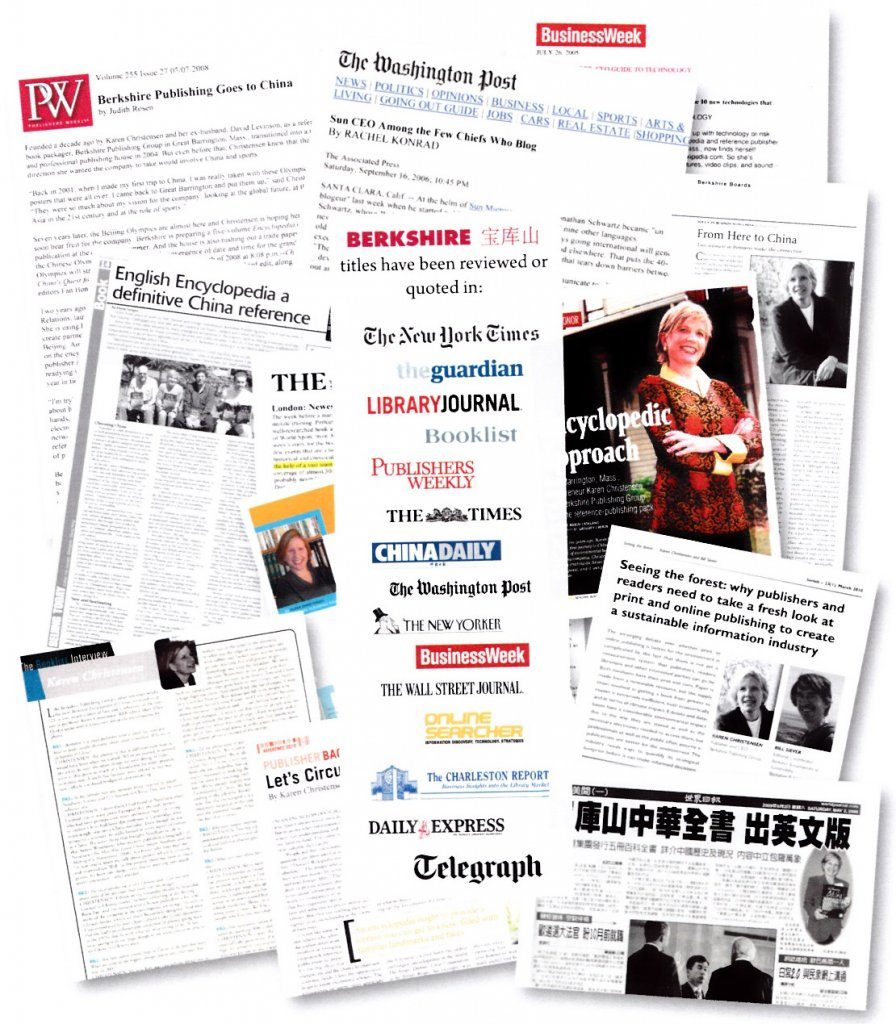 One of the 20th century’s great intellectuals, W.E.B. Du Bois (1868-1963), the first African American to get a Ph.D. at Harvard, grew up in Great Barrington. The global thinking espoused by Du Bois has inspired Berkshire and its authors. We now publish some of his books in Great Barrington Editions.

Awards have come from Booklist, Library Journal, Choice, American Libraries, the New York Public Library, and even William Hill, the UK bookmaker, which selected the first Encyclopedia of World Sport as a Book of the Month – quite remarkable for a three-volume reference title. 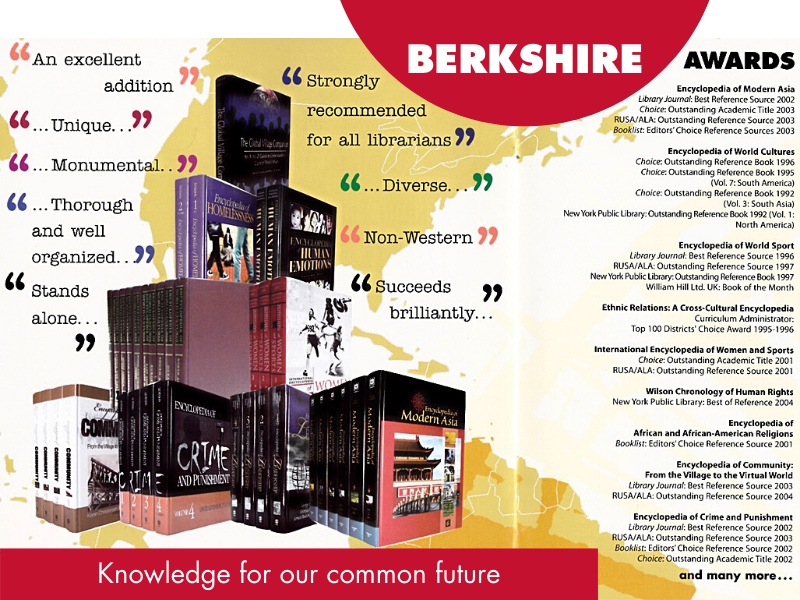 “Take a publisher with a decade of experience in China, add a group of well-known Chinese and Western scholars, pay special attention to details, add 1100 unique photographs, sprinkle in dozens of traditional Chinese proverbs, do it all on recycled, chlorine-free paper, and the end result is [the Berkshire Encyclopedia of China, a] sumptuous resource on all things China for the 21st century.” – Library Journal Best Reference

“A masterful title that weaves together the social, scientific, anthropological, and geographical influences on world history, this set [the Berkshire Encyclopedia of World History] will be the benchmark against which future history encyclopedias are compared. . . . Though attempting to cover as broad a subject as world history in five volumes seems impossible, the editors and their contributors have pulled the feat off with aplomb. No article runs more than approximately 10 pages, but each captures the essence of the topic being addressed as well as the distinct style of the contributor…. As McNeill states in his preface, the title is ‘designed to help both beginners and experts to sample the best contemporary efforts to make sense of the human past by connecting particular and local histories with larger patterns of world history.’ The encyclopedia succeeds admirably and belongs on the shelves of all high-school, public, and academic libraries. In short: buy it. Now.” – Booklist Starred Review and Editors’ Choice.

“Sorting the sum of human endeavors and presenting students with a coherent plan of study is no easy task, but [in creating the Berkshire Encyclopedia of World History] a winning combination of distinguished historians and a seasoned editorial staff has proven more than equal to this massive undertaking.” – John Lawrence, “Lawrence Looks at Books”

“I first became an avid student of David Christian by watching his course, “big history,” on DVD, so I am very happy to see his enlightening presentation of the world’s history captured in these essays [Berkshire Publishing’s bestseller, This Fleeting World]. I hope it will introduce a wider audience to this gifted scientist and teacher.” – Bill Gates

“This [the Berkshire Encyclopedia of Sustainability] is undoubtedly the most important and readable reference on sustainability of our time.” – Jim MacNeill, Secretary-General of the Brundtland Commission and chief architect and lead author of Our Common Future (1984–1987)

“The call we made in Our Common Future, back in 1987, is even more relevant today. Having a coherent resource like the Encyclopedia of Sustainability, written by experts yet addressed to students and general readers, is a vital step, because it will support education, enable productive debate, and encourage informed public participation as we join, again and again, in the effort to transform our common future.” – Gro Harlem Brundtland, chair of the World Commission on Environment and Development and three-time prime minister of Norway

International Encyclopedia of Women and Sports

“A monumental undertaking, [the International Encyclopedia of Women and Sports, edited by Christensen et al.] covers women’s sports worldwide and throughout history … A scholarly resource for public libraries and school at all levels, middle school through college.” –  Library Journal

“[The International Encyclopedia of Women and Sports contains] engaging illustrations and photos, as well as numerous sidebars, tables and charts … [and] a sense of scope and comprehensiveness not afforded by other sports references.” – Against the Grain

“Works like the Berkshire Encyclopedia of Human-Computer Interaction play a valuable role in lending definition to emerging, interdisciplinary fields of study.” – Against the Grain

“The Encyclopedia of Leadership is a model of a modern reference book … [it] belongs in the personal collection of every person seriously interested in leadership, whether as student, scholar, or practitioner.” – Compass

“Incredibly, [the Encyclopedia of Community: From the Village to the Virtual World] is the first encyclopedia to focus on community as concept and experience, so stands alone in its field as the one title any library must buy to cover this topic. . .  .  Essential. All readerships.” – Choice