The one thing I knew about the great Ming novel The Golden Lotus (Jinpingmei – 金瓶梅) by Lanling Xiaoxiao Sheng (Tuttle 2011) was that it is regarded as an infamously explicit text with passages so inflammatory that its earlier translators into English rendered the most lurid into Latin, as a form of delicate censorship. 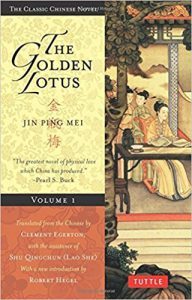 Now I have read the translation produced in the 1930s by ex-army officer Clementon Egerton, supposedly with the support of the great novelist Lao She, and these are the four things that really struck me:

Firstly, this is a profoundly moral work. Its view of the way the universe operates is a moral one. There is retribution, a distribution (eventually) of justice; the good get their rewards, and the evil their just deserts. Ximen Qing, the protagonist for most of the novel’s 1300 pages, is the archetypal Chinese antihero, someone dripping with ambition, power and success, but whose appetites overwhelm him in the end. The final parts of the work, with their description of the karmic afterlives of the characters, underline this. The Buddhist and Daoist world views are honoured in the way the narrative unfolds – life events are producers of negative or positive energy, lives are made up of good or bad acts, and the universe honours the reward, or punishment, for these in the way that lives unfold.

Secondly, there can be few more powerful, and more unsettling, descriptions of lust and its addictive, corrosive powers in world literature. Ximen Qing distils all of this, a man who is able to judge the right transactional value in any social intercourse during the day, but who abandons himself in the night world to a different sort of transaction, one that ultimately overwhelms him. He must be one of the most compelling figures in the whole corpus of Chinese literature, a sort of archetype of the high level official, perpetually caught between heaven and hell. And his demise (although I was forewarned of this) through an act of sexual sado-masochism is truly horrifying. It needs to be read to be believed. He literally has his life force sucked out of him!

Thirdly, this is also a tragedy, the account – with beautiful symmetry – of the rise and then fall of a house and of the people in it. The account of the illness and then death of the Sixth Wife, Li Ping’er, is truly moving – worthy of the best melodrama of Charles Dickens. From this moment in the plot, the whole edifice of refined order and stable power that had been constructed before starts unravelling.

Finally, like with The Story of the Stone (红楼梦), the presence of another order of reality is never far away. Daoist and Buddhist philosophy weaves its way in and out of the narrative.

Reading a work like this really helps in starting to understand the differences, at least historically, in what could be described as a Chinese world view, and that of Europe. The Golden Lotus was written at the time of the Renaissance, when figures like Thomas More, and, a bit later, Erasmus, Michel de Montaigne and William Shakespeare were active. It is odd that more hasn’t been done to compare the literature of these two eras. The moral vision of the world in Golden Lotus and that of, for instance, Hamlet, do have fascinating resemblances, despite being such different languages, social and political worlds, and intellectual backgrounds.

But the biggest surprise of all is that the Golden Lotus is a thrilling read, and not because of the salacious scenes of carnal love – which, after all make up about one per cent of the text – but because of the wonderful storytelling.