While wandering around China in late September last year, on the interminable bus and high speed train journeys, I managed to read through my colleague at King’s College, John Bew’s new biography of Clement Attlee, Citizen Clem (Quercus 2016). 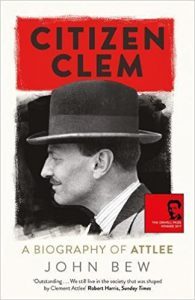 Clement Attlee, leader of the Labour Party in the United Kingdom for a phenomenal 20 years from 1936, Deputy Prime Minister in the Coalition government during the Second World War, and Prime Minister from 1945 to 1951, has had secular sainthood conferred upon him in recent decades. In most polls of best British leaders in modern times, he usually comes out either first or second (after Winston Churchill). In terms of the massive domestic and international legislative programme he steered through when PM, it is easy enough to understand why he is given this sort of assessment. Under him, the National Health Service was created, India became independent, the UK acquired hydrogen bomb technology, and national insurance regulations were passed. In view of the fact that the highest accolade one can usually confer on most of Attlee’s predecessors is that they may have done little but at least did no harm, his achievements are pretty dazzling, positive ones.

Bew is good at explaining precisely why Attlee and his colleagues were able to move forward with so many issues. The war had cleared away a lot of political space. There was a hunger for a new beginning. The landslide Labour victory in 1945 (after near annihilation a decade and a half earlier) gave him a massive mandate. And because of the war, there was already an acceptance of a semi-command economy where rail and utilities could be nationalised.

Bew also draws out the very complex relationship that Attlee had with Churchill. They worked closely and collaboratively in the War. Like Churchill, but in very different ways, Attlee was a profound patriot. There is a description of an amazing meeting in 1940 when the world was falling around Britain’s ears, and the five most influential members of the Cabinet met in the Houses of Parliament to decide whether to reach out to Hitler and suggest a new attempt at appeasement and rapprochement. Chamberlain, then gravely ill, and Halifax were pro. Churchill, Attlee and an undeservedly forgotten MP called Arthur Greenwood were adamantly opposed, and won the day. The rest, as they say, is history.

Churchill in this biography however is not the great orator and war time leader but someone seen from the vantage point of his deputy, Attlee – a person who had to do much of the day to day governance over this period. Frequently either depressed or inebriated, Churchill comes across as a man more significant for his erratic instincts, which at least on the really big things proved right. As he was to prove when re-elected in 1951, he was a terrible peace time leader. But Attlee maintained a huge devotion to him despite being his opponent for so many years in ways which it would be hard to see replicated amongst political leaders today.

Bew spends a large part of the opening of the book explaining why Attlee is such a hard figure to deal with despite the immensity of his achievements. He was incorrigibly low key, travelling to work by underground, and rebutting those who came and asked him whether he had ever been told he looked like Clement Attlee with the curt response: “Frequently!” What is not hard to see is his two amazing attributes. One was a complete lack of ego. The second was his profound principles and convictions, which he held unwaveringly from his time as a young politician in the East End where he saw so much poverty. Both of these characteristics would mark him out amongst today’s dismal hoard of mediocrities, sociopaths and small time demagogues trying to run the UK as being so unusual to be verging on the certifiable!