Home>Berkshire Bookworld>Book reviews>Kerry Brown reviews All Out War: The Story of How Brexit Sunk Britain’s Political Class by Tim Shipman
Previous Next

The Chinese Year of the Rooster is apparently – it being a fire rooster we are talking about – the year to bring things to fulfilment but not to instigate them. Anyone searching for a text book on how not to implement or achieve might care to look through the hundreds of pages of All Out War: The Story of How Brexit Sunk Britain’s Political Class by Sunday Times journalist Tim Shipman (William Collins 2016). They will find it a sobering experience. 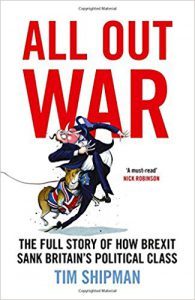 All Out War is a blow by blow description of the build up to the referendum held in June 2016 in the United Kingdom for it to leave the European Union (EU) – a referendum that spectacularly led to the decision to do so. It is amazing that something so detailed and measured could be written only a matter of months after the events it describes. But these days, sources seem to grow online rather than being stuck in archives or people’s faulty memories where they would need to be dug out. The most amazing feature of this account, however, is simply that no one comes out looking too badly nor well. It is a very good description of a horrible, slow motion, still unfolding calamity in which people on either side seem to be passive victims of events, rather than protagonists.

Let us set aside the interminable, and probably irresolvable, issues of whether it was right or wrong for the UK to even contemplate leaving the EU in the first place. That decision has been made (sort of). What is remarkable is that no one – literally no one – in this whole book ever thought of the consequences of what they were doing, beyond the most generic, abstract ones. The inners and outers focussed on the headlines, but not the small print underneath. For them, it was all about the importance of their principles, and the need to just do and be damned. David Cameron, who, miraculously, comes across as a relatively sympathetic figure in Shipman’s account, certainly didn’t think of a plan if the Referendum vote went against him. If he had, he would have dealt with the aftermath a bit better, rather than making his shock decision to simply resign and clear off. Neither did the divided and fractious Brexiteers think through the implications of them being successful. For them, it was all about clearing the benighted EU and its mythical evil tentacles out of Great British life. All they knew was they hated what exists now more than anything that might possibly replace it – a somewhat bold ambition. Be fearful of what you want actually happening!

The real villain of this story, however, are neither the inners nor the outers – who at least were performing according to agreed standpoints and their respective convictions. The absolute acme of perfidious deception and self-righteous uselessness is Jeremy Corbyn, a figure who, remarkably, emerges from the book with even the dismal reputation he currently has diminished. Corbyn, clearly, deeply wanted the UK to depart the EU, despite leading a major party where the public position for decades had been the absolute reverse (no surprises there for someone who, as a backbencher, has voted against his own party 671 times in the last three decades). His lukewarm words of support for staying in the EU, delivered late and poorly, did more to confuse than help members of his party, so many of whom then ended up voting against membership.

We are where we are now. The book just makes it a little less bewildering and painful working out precisely how we came to this pass. As someone whose day job involves dealing with the minutiae of Chinese elite politics, I particularly enjoyed the author’s parsing of the Oxford University Conservative Association in the late 1970s – an unholy alliance of private school and state school figures – with a dense collection of networks worthy of the best Beijing Central Committee, all based on patronage links, schools, regional locations. It made me realise that British politics is as tribal and factionalised as that within a One Party state. Not so surprising, when one remembers that the Labour party’s terrible performance in this referendum, and the Conservatives savage self-preservation have conspired to bring precisely that outcome about in the UK.