Home>Berkshire Blog>Women’s World Cup: Remembering a night at Foxborough in 1999
Previous Next 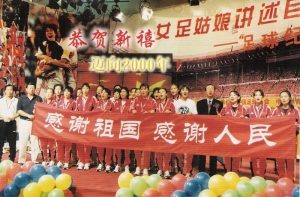 When I hear about the Women’s World Cup, I think of Mr. Kim, who was in charge of the North Korean team in 1999.

Twenty years later, people are talking about the World Cup without always prefacing it with “Women’s.” The World Cup is probably the most international of sporting events, except for the Olympics, and in 2019 it’s been fantastic to see Americans paying attention.

Of course there’s a simple explanation: American women’s soccer is much more successful than men’s. We didn’t even qualify for the other World Cup, the one with men. But it’s still fantastic to see women’s sports getting this kind of attention. I remember when working on the International Encyclopedia of Women and Sports, which we published with Macmillan in 2001. I was also one of the editors, to the surprise of all my friends and family. One of the big challenges then was simply getting people to notice women’s sports – including the World Cup.

The challenges faced by women athletes were formidable. We peppered the three encyclopedia volumes with quotations from men about why women should play sports, to provide some context and a few laughs.

I took that project very personally. Although I’m very competitive, I was discouraged from trying any sport. I was not only a girl, but identified early as a “bookworm,” and of course bookworms didn’t play sports.

In my early twenties, I became a wannabe jock. I wrote about that for the UCSB alumni magazine, and when the chance to develop an encyclopedia about women and sports I jumped on it.

A memorable experience right at the end took place after a double header at Foxborough Studiumduring the Women’s World Cup 1999. Here’s what I wrote in the introduction:

We returned to our hotel at midnight and found the lobby full of players from the U.S., Mexican, and North Korean teams we had watched play earlier in the evening. … We watched the players sign soccer balls and pose for photographs with their fans, and we talked to several members and coaches of the three teams. It was enlightening to be among the calm and confidant American players and their friends and families, talking to North Korean officials as the team dined on a buffet of American Chinese food, and chatting with 16-year old Monica, the youngest member of the Mexican team, in the corridor outside our room. Perhaps most striking was the fact that they were wide awake, happy, excited, and hungry, although it was midnight and they had just played 90 minutes of end to end soccer at the height of a heat wave.

What I didn’t include then is how I spent almost two hours chasing around the hotel after a mythical “Mr. Kim” who might give me permission to talk to the North Korean women. The team members and their vast entourage stared silently at me as I went from one official-looking person to another.

“Speak Mr. Kim,” is the refrain I heard, and I would be sent to another room, another floor. Of course each person I spoke to also turned out to be Mr. Kim. But not the Mr. Kim.

Long after midnight I gave up and crawled into bed. At the time it seemed odd that they were eating Chinese food, but now I know that Chinese food, because it is so easy to find around the world, has become the default choice for many people from other Asian countries.

Today, the Netherlands and the United States will compete in the final. Our loyalties are torn because we miss our long-time colleague Marjolijn Kaiser, who is Dutch, and somehow feel that the Europeans should stay on top in this competition. But may the best team win while we celebrate the rise of women’s sports.

Yes, it’s about time for a brand-new International Encyclopedia of Women and Sports!