The New York Times published a list today of 15 overlooked women, and I was glad to see that the first, Ida B. Wells, is someone we included in Women and Leadership: History, Concepts, and Case Studies (Goethals & Hoyt 2017), and the third, Qiu Jin, in the Berkshire Encyclopedia of China.

The second in the list is poet Sylvia Plath, whose story comes into the book I’m writing about Valerie Eliot, the widow of T. S. Eliot (click here to read my 2005 article about her in the Guardian Review). One of the  controversies about Plath is that her estranged husband Ted Hughes controlled her literary work after her suicide in 1963. Valerie Eliot similarly controlled the literary estate of Eliot’s first wife, Vivien – who was the subject of the play and movie Tom and Viv and the biography Painted Shadow.

It was my research on Valerie Eliot and Sophia Mumford, widow of another famous writer and and featured in a play being performed in Newburyport, MA, this week (click here for details), that led me to write a chapter on “Paths to Power” for Women and Leadership. I had become interested in wives and widows, mothers and daughters, concubines and courtesans, and other women who have exerted power through men. To my surprise, there wasn’t much written about them. I was especially curious about women’s rising to power through men because of Hillary Clinton’s presidential candidacy in 2016.  Here’s what I wrote when I thought she would win the US presidency:

Across the world and over the millennia, wives and widows and concubines have become heads of state. In modern Asia and Latin America the pattern is notorious. But no recent woman leader in a Western democracy is the daughter, sister, wife, or widow of a former leader – until now, that is, when the historic candidacy of Hillary Clinton gives us the prospect of a former first lady becoming president and commander in chief of the United States.

Why, I wondered, would the United States follow the model of countries like Argentina and the Philippines instead of Norway and Britain? Doesn’t this send the wrong message, that marrying the right man is still the key to getting ahead?

President Obama wrote recently in Glamour magazine, “Two hundred and forty years after our nation’s founding, and almost a century after women finally won the right to vote, for the first time ever, a woman is a major political party’s presidential nominee.” Yet Clinton’s success has raised a surprising question for twenty-first-century women. At the SDSX technology conference last year, reporters asked First Lady Michelle Obama, as if it were the most natural thing in the world, whether she planned to run for president. After the Indiana primary vote in 2016, HRC was referred to by an MSNBC reporter as “the former first lady,” rather than as the former senator or former secretary of state.  An article last week referred to the other potential 2016 woman candidates for president: “Michelle Obama or Elizabeth Warren.” Michelle Obama has never run for political office. Elizabeth Warren is a senator. What is going on? Are we living House of Cards (in which the first lady demanded to be made ambassador to the UN and then vice president)?

Mrs. Obama would probably be the first to say that being first lady does not qualify her to be president, any more than being married to an astronaut would qualify her to join a space mission. But all too many people are ignoring the fact that Clinton’s historic breakthrough isn’t exactly the triumph for women it’s cracked up to be.

This is not to disparage the Democratic candidate for president. There’s little doubt that Hillary Rodham – single, married, or divorced – would have risen to a position of influence. But if she hadn’t married Bill Clinton, would she be making history as presidential candidate and as the first woman president of the United States? Her rise to power began when her husband left the White House, and it was his name, his position, his brand, and his access to wealthy donors, that made her political career viable. And the fact is that this gave her an advantage that cut out other women who might have run this year.

More important, it seems to me, is that it affects many people’s view of Clinton. As a friend put it, “Bill and Hillary Clinton seem so Argentina, or Ukraine.”

But Clinton’s path to power is one that women leaders throughout history have taken. The classic pattern was a beautiful or sexually attractive woman who used her personal attributes to attract or “catch” a man and thus to rise in the world, first by obtaining wealth and status but then by exerting power through her husband. Some rose to take full control, after a son’s or husband’s death. In the Tang dynasty, for example, a minor concubine used her intelligence, steely determination, and remarkable political acumen to become Wu Zetian (624–705), the only female emperor in the history of China. Other women have stayed on the sidelines, without official position and sometimes barely known in their own time, but nonetheless playing a vital role in national and world affairs.

This is a universal phenomenon. Women have striven for status and influence across the world and throughout history: concubines became empresses, courtesans directed kings, and salonnières were the center of intellectual and political life in Enlightenment France and in London at the height of the British Empire. In the twentieth century, there were Washington hostesses who wielded power behind the scenes, and some recent national leaders, including Park Geun-hye of South Korea and Cristina Elisabet Fernández de Kirchner of Argentina, who came to power through a male relative.

To be sure, men have followed their fathers, and brothers, into positions of power, and in 2016 the Republican Party expected to have third Bush as their candidate. There is a logic to it, just as there was with Hillary Clinton. Modern marketing depends on having a brand, and a platform. Why start over with someone new, or a whole new movie concept, if you can continue with the same name, the same franchise?

Another way to look at Clinton’s rise to power is that the United States requires transitional steps when making major changes. We cope with a uniquely dynamic and mobile society by being conservative about certain things. We won’t change to the metric system. We won’t adapt to the $1 coin. We are more religious, and we marry more than do people in other Western democracies (the US marriage rate is many times higher than most European countries).

Barack Obama was a transitional figure, too. Our first black president is half African (rather than African American) and half white. This gives him an identity that is more mutable, more flexible, and therefore easier for Americans to accept.

Understanding this aspect of Hillary Clinton’s rise to power, and the fluidity of her identity, puts her success into historical perspective. The hard choices she’s made in her personal life do not provide a blueprint for younger women, but they highlight her drive to succeed in public life and her immense capabilities, and make her a role model for realism and perseverance – qualities that will serve her well as president of the United States. 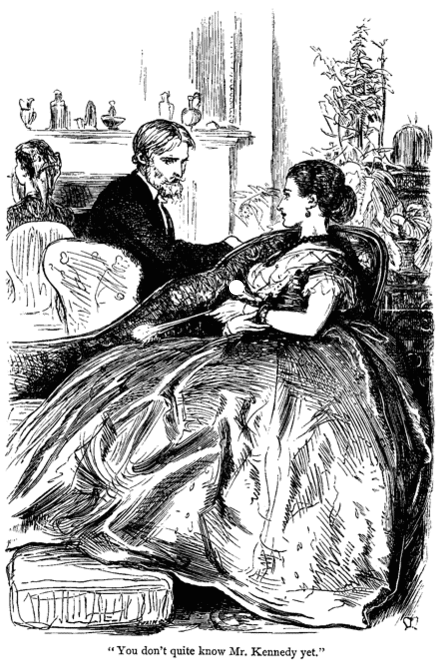 You can download a PDF of my chapter “Leading from the Fringes: Women’s Paths to Political Power” by clicking this link. I’d love to know about other writing on the subject. The chapter includes a section about politically inclined women in fiction, too. If you’re looking for fun and thought-provoking winter reading, you won’t do better than tackle Anthony Trollope’s “Palliser” series, which helped  me survive the election of 2016. Trollope’s female characters are strong, intelligent, and ambitious within the severe constraints of Victorian England.Lady Laura Standish, for example, wants to talk over the Reform Bill and the next election, not fashion or society gossip, and persuades her father to join the government because, “It was her ambition to be brought as near to political action as was possible for a woman without surrendering any of the privileges of feminine inaction. That women should even wish to have votes at parliamentary elections was to her abominable, and the cause of the Rights of Women generally was odious to her; but, nevertheless, for herself, she delighted in hoping that she too might be useful,–in thinking that she too was perhaps, in some degree, politically powerful.”