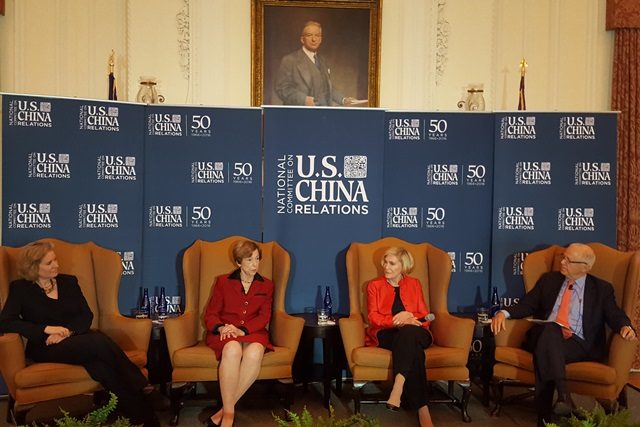 On Tuesday, 6 June 2016, Hillary Rodham Clinton became the first woman to become the presidential candidate of one of our two major parties. This is historic, as the press keeps telling us, but we should remember that many other countries have, or have had, female leaders. The United States has lagged behind other Western democracies, in fact. We’ve had very few women as even long-shot presidential prospects (you can see the list here).

Looking at women in political leadership from a global perspective, it is curious that the first female president of the United States, should Clinton win in November, will be the wife of a former president. This is quite common in Latin America and in Asia, but not in modern European democracies.

Women in political leadership is just one of the multitude of topics covered in Women and Leadership: Histories, Theories, Life Stories, and Case Studies, edited by George R. Goethals and Crystal L. Hoyt of the Jepson School of Leadership Studies at the University of Richmond. Women and Leadership has dozens of contributors, both experts on leadership and historians and biographers, and it tackles a wide range of topics, from transformational leadership, leadership in politics, business, and social movements, a fascinating chapter on women leaders in utopian movements, and the story of a program to recruit women into the upper levels of the federal government under Richard Nixon. We learned about that piece of women’s history from Barbara Hackman Franklin a few weeks ago when she spoke on a panel in New York organized by the National Committee on US-China Relations (NCUSCR).

Purely by chance, the NCUSCR panel consisted only of women leaders, two former US Trade Representatives who had been involved in negotiations with China, and Franklin, who was Commerce Secretary under George H. W. Bush. The program was a valuable look at international trade negotiations, and 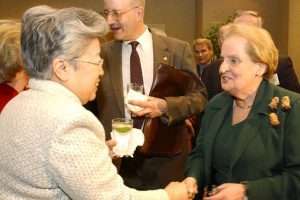 I especially enjoyed the discussion of women in this sector of politics. At one point in the 1990s, the negotiator on the US side was Ambassador Carla A. Hills, who was one of the speakers that evening, and on the Chinese side Madame Wu Yi. Here’s what Tim Clissold, author of Mr. China, wrote about Madame Wu: “Despite almost weekly meetings, it took an exhausting 18 months of shouting, rows and door-slamming to sort out the mess. Throughout, Madame Wu deliberately reinforced her image as a Chinese Boadicea, fearlessly defending the nation’s honour against the wealthy foreigners, which went down famously with her superiors at the bureau. She was proud of her image and once told me shamelessly that she ‘used to be a soft young girl from Shanghai, but what you see now is a battleaxe from Beijing!’” This photo of Madame Wu and Secretary of State Madeleine Albright is courtesy the US-China Business Council.