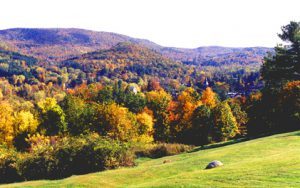 The pear was beautiful, brassy gold flushed with crimson, and heavy. The skin began to give as my fingertips went round it. “They’re very ripe,” Julia said. 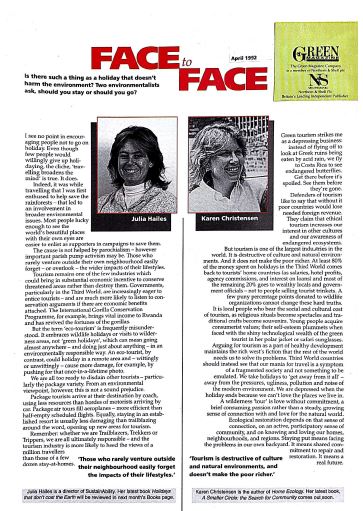 It was so ripe that I could smell the air in an autumn orchard, just verging towards alcoholic decay. I cracked the skin with the tip of my teeth and felt the liquor begin to spill out. “We don’t use paper napkins,” she said, “I’m sure you don’t either.”

Asking for a napkin would be a confession that I was not as green as they. I stared at the pear for a few seconds, then dived in. I almost choked on the liquid flesh and crisp skin and sucked on the core till there were only threads and the dark stem which I held between my sticky fingertips.

That was in 1992. A magazine in London had wanted a debate on travel, and asked me to write the “stay at home” column while bestselling author Julia Hailes wrote about the benefits of ecotourism. She then invited me to lunch at the new offices of SustainAbility, the company she and her coauthor John Elkington had founded.

They had a big platform and two bestsellers while I was a newbie author with a three-month-old baby and a toddler. Lunch was designed to put me in my place, and I had to laugh about the trick with the pear. I still remember licking my fingers because I was damned if I would give them the satisfaction of asking for a paper towel. But at the time I did believe that “our mania for travel is a symptom of a fragmented society and not something to be emulated. We take holidays to “get away from it all”—away from the pressures, ugliness, pollution, and noise of the modern environment. . .Ecological restoration depends on . . . an active, participatory sense of community, and on knowing and loving our homes, neighborhoods, and regions. Staying put means facing the problems in our own backyard. It means shared commitment to repair and restoration. It means a real future.”

Okay, new converts are often intense, but the point I made has some truth to it, one that I am reminded of every time I hear someone start counting their trips to China or the number of countries they’ve been to, or when I see a stream of photos of someone posed against one landmark or vista after another. Did she ever turn around and look at the mountain or the minaret, I wonder? Do we only see the places we’ve been when we’re editing the photos to upload to Facebook?

But it’s no surprise that I had an airmail envelope in my hand in this photo, taken when I was four. I left home when I was fourteen, running away to a commune in Oregon. At sixteen, I traveled alone, paying my own way, to Guadalajara, my first time outside the United States. At nineteen, I moved to England, and lived there for most of the next fifteen years. When I got pregnant at twenty-seven, I went to Poland via East Germany. A month before my baby was born, I somehow managed to get on a flight for a weekend in Paris. I couldn’t bear Americans who talked about “Yurrup” or the places they’d “done.” I resented the word tourist.

I wanted, even as a child, to see my own world from a different vantage point. That’s what drives many of us to books: we not only want to visit other places and times, but to see our own place in the universe in a new way. Of course, a writer’s goal is to transport the reader to another place, another time, another way of looking at the world, and a gifted writer uses her imagination and knowledge to create the world of a book or blog. But I am someone who needs to see things for herself. I like to get my hands dirty. I love watching people’s faces as they huddle over breakfast in a roadside cafe, or squat on the sidewalk beside a glowing brazier, watching a set of skewers. I like catching someone’s eye when an argument is going on, sharing a moment of frustration that bridges language and culture. When I consider the value of travel, the first thing that comes to mind is that reassuring sense of shared humanity. 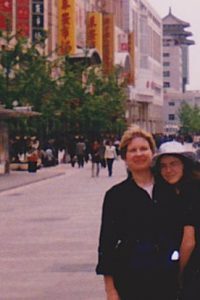 That was even more important when I finally went to China. “China is much more than it sounds, and the sight must be seen and not heard, because hearing it is nothing in comparison with seeing it.” This quotation comes from the first Western book about China, published in 1569. Today, nearly five hundred years later, vast amounts of information are available about China in books, journals, websites, blogs, television programs, and movies. But it’s still true that there is “nothing in comparison with seeing it.” I would never have imagined, for example, that Beijing is full of roses, even under blistering sunshine and in the midst of ugly smog. For me, that’s what counts as an authentic travel experience: not the grand sights, but the detail, the smells and tastes and sounds and textures of another place on earth.

I’ve been discussing this a lot of late, after learning about an author whose impressive work on Chinese cuisine was drawn from written sources, from past experience in Taiwan, and Chinese restaurants. Does that matter, I wondered. Can you be an expert on a cuisine without tasting dishes and watching cooks and visiting markets in the place you’re writing about? For many of us, food has to be tasted and smelled in situ, and eating is one of the most important ways to learn about a place and culture. Eating, in fact, is one of the tangible benefits of traveling the world. I often say that I decided to publish about China because I so utterly fell in love with the food on my first trip in 2001.

This is nothing new, either. Working with world historians has taught me that we humans live, and have lived for millennia, in a world in motion. While the majority of people in the past rarely traveled any distance from their birthplace, there have always been travelers, not just famous ones like Marco Polo or Christopher Columbus. The religion of Muhammad spread across Asia all the way to modern Indonesia in a remarkably short time (that story is told in This Is Islam). Chinese people have been crossing the oceans, and going home again to their laojia (hometown), for many centuries. Here’s a wonderful article about just that: Migration by Adam McKeown, from the Berkshire Encyclopedia of World History. 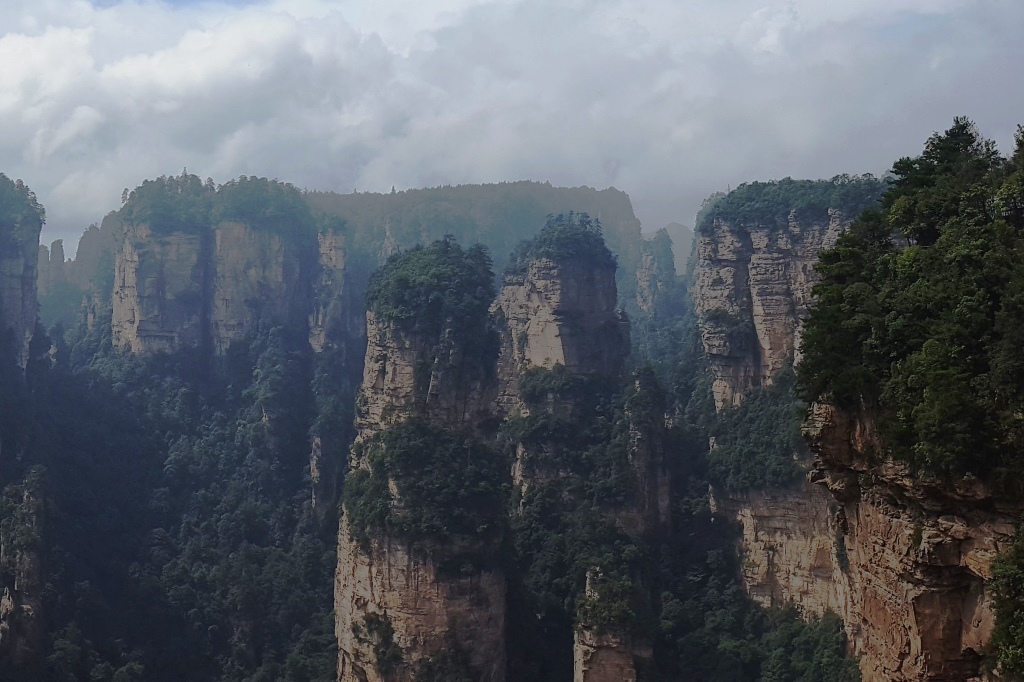 Cheap air travel, introduced in the 1970s, made it possible for the masses to see the world, and at the same time container ships were transforming global trade. Computers made communication faster and cheaper, and connected banking and financial systems. These technological developments made globalization possible, and we’re still catching up with the changes it has made to societies and economies, and to our families and our sense of personal opportunity.

A Norwegian think-tank found that families who made the greatest efforts to be green at home often undid those efforts by feeling justified in taking holidays abroad, traveling by air. As everyone who has taken a Footprint quiz knows, air travel guarantees that you aren’t going to get a good score. We are supporters of passenger rail, of course, and the Train Campaign, but I travel more than I would like by air and don’t believe that carbon offsets come close to being a solution. I’m hoping that new materials and new energy sources will mean encouraging updates to this article about Airline Industry by R. Benjamin Hill, from the Berkshire Encyclopedia of Sustainability.

But this is a time in history when the benefits of travel have a heightened importance. The more powerful a nation is, the more its culture dominates other places, the less likely are its people—including its politicians and academic experts—to understand that there are other viewpoints. A global perspective doesn’t come from looking out over the world, surveying it from afar, but of being able to put yourself, as the Native Americans said, in someone else’s moccasins. Travel should change us, make us better, more informed and open-minded and joyfully connected with our fellow humans. Unfortunately, people who travel a lot often seem to have little idea about what ordinary people around the world are like, perhaps because frequent travelers are such a privileged class.

It’s still important to do some of our exploring in books – not to be only an armchair traveler, but to ensure that when we go to another country we are doing something more than lying on a beach where the sand is a different color or taking selfies in front of famous sites. After seeing canals in Copenhagen, Hamburg, and Scotland in July, I started rereading The House of Exile, an account of living with a family in China in the 1920s, in which the young American author details traveling on the frozen Grand Canal, sledging along the ice wrapped in furs and blankets and watching skaters, traders, and warlords’ troops moving across China. Nora Wahn, a twenty-something graduate of Bryn Mawr, describes seeing a soldier shoot a child for not handing over a goose. Her immersion in another place, and into a new and beloved Chinese family, gives her writing an astonishing longevity, and I find myself wanting to experience a similar sense of embeddedness when I go to China. (Of course I appreciate the fact that there are no marauding soldiers to contend with.)

We’re now looking for Asian and European publishers for Frommer’s travel guides, so I reread this article on the history of Travel Guides by Michael A. Ryan, from the Berkshire Encyclopedia of World History, and learned: “One of the earliest travel narratives is that of the Greek historian Herodotus. In his Histories, written around 440 BCE, Herodotus recorded his personal observations of his extensive travels in the Mediterranean basin, visiting places such as Egypt, the Black Sea, Scythia, Mesopotamia, Babylon, Cyrene, North Africa, and Anatolia (in modern Turkey). Ancient Greek writers who probably traveled to India included Ctesias (c. 398 BCE) and Megasthenes (c. 303 BCE).”

What do you think: should we stay home or travel the world? What do you think makes an authentic travel experience? What are your favorite travel books, and travel guides? And should we be taking so many photographs? I must admit that I treasure this panorama shotof the floating mountains of Zhangzhajie, the national park in Hunan Province that we visited thanks to the Taihe Foundation in August.