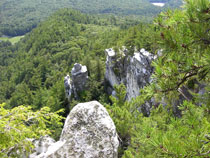 Trains have been on my mind since April, when I tried the new service from Shanghai to Hangzhou. The plum and cherry trees were in full bloom and the weeping willows freshly in leaf – what a day to see the West Lake for the first time! And how incredible it seemed that high-tech companies like Alipay and Taobao could set up headquarters in one of the most beautiful cities in China because the transportation is now so good. The high-speed train takes only an hour (90 miles or 145km), and the Shanghai station is immediately next to the main airport terminal.

I live in another beautiful place, the Berkshire Hills of western Massachusetts. I also live in New York City, and my life includes almost weekly trips to New York by train (125 miles or 200km). But the travel picture here is quite different. This was starkly evident last September when I met our editor and author, David Christian (This Fleeting World), at Grand Central Station. He’d just arrived from Australia and was coming north for the weekend to visit William H. (Bill) McNeill (Berkshire Encyclopedia of World History). I’d come in from China the night before. We were both in need of caffeine, but time was tight. “That’s okay,” David said, “We’ll get a coffee and sandwich on the train.” I started laughing and said, chagrined, “Wait till you see this train.”

The line I take weekly is just over two hours, from Grand Central to Wassaic, NY, where the station stands all on its own in the midst of hills and wetlands, no town or building in sight. We’re lucky if the restrooms (WCs) are working. The trains run at two-hour intervals, and we have to switch to a train with a diesel engine to make the last 30 miles to Wassaic. The trip is cheap but it is not, as you can see, anywhere close to international standard. And neither is Amtrak, the best the United States has to offer.

I dream of train service that we Americans could be proud of, a crucial investment for regional prosperity and sustainability. And I’m not alone. There are many Americans who understand what good train service would mean in terms of the environment and the economy. “Too expensive,” some say, but that’s because they aren’t recognizing that we should spend more on railways and less on roadbuilding, and that good railways will encourage efficient, dispersed economic development.

Recent news about the Chinese bullet train accident and subsequent government cover-up is a big disappointment, but our terrain isn’t suitable for bullet trains anyhow, and I’ll be happy with something less than 200 mph. I often tell people that Great Barrington, small as it is, has become a center for global and China-focused publishing. Train service would enable me to bring colleagues and authors from around the world to the Berkshires on a much more frequent basis, and give us the potential to host conferences for academics from Boston, New York, Washington.

As things stand, I don’t encourage people to visit us the way I would like to, and I don’t plan events and editorial meetings in the Berkshires, as attractive as that would be, because it’s not convenient to get to and I don’t want to subject my colleagues to the unsigned and unannounced transfer to a diesel train. (This lack of signposting isn’t limited to the trains. New England also has notoriously bad road signs, based on the belief that if you don’t know where you’re going you shouldn’t be here.) Wassaic, the end of the line, has no rental cars and is still an hour’s drive southwest of Great Barrington.

A Chinese friend, a well-known blogger and online community expert, brought his wife and little girl to Great Barrington two years ago because he wanted them to see what America is really like and how beautiful it is (the Chinese name for the USA means “beautiful country.”) He was amazed that I could run a global business from here and said it would be impossible in China, even though their cellphone system offers almost universal coverage. The idea of moving businesses back to the countryside hasn’t yet developed in China, but it could. I’ve begun pulling together a Berkshire Train Campaign because I’d like to think that we could, in the course of building a China-focused publishing center, also demonstrate an innovative, sustainable approach to rural development.

We cover issues such as public transportation, urban and rural development, and sustainable business futures in the Berkshire Encyclopedia of Sustainability, naturally, and I do hope we’ll have a chance to welcome you to the Berkshires before long!