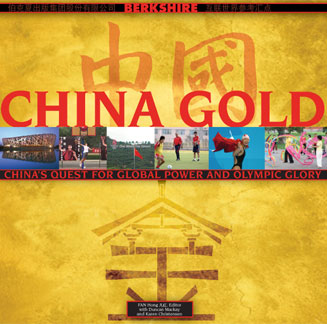 Read the whole story of Chinese sports in Berkshire’s China Gold: China’s Quest for Global Power and Olympic Glory (2008). As we said on the cover:

The Olympics are about much more than sports. They teach us about global relationships and global change, about power and politics, and the 2008 Games (only the third to be held in Asia) gave us a new perspective on a fascinating story, that of a 5,000-year-old civilization resuming its international influence after centuries of turmoil. People around the world are looking for ways to get a handle on what China is like and what its rising stature in the global community means for our way of life, our jobs, our children, and our planet. China Gold is not only for the sports-obsessed, full of background history and facts you won’t get anywhere else, but for everyone intrigued or puzzled by China.

The story of Eric Liddell is my favorite because it unites so many aspects of global history. I’ve thought of it as we watch the 2012 Olympics in London, where Chinese athletes are amassing many medals. I wonder if any of them know the story of Lee Airui, China’s first Olympic medalist?

Eric Liddell, the runner portrayed in “Chariots of Fire” who refused for religious reasons to run on a Sunday, was the first Olympic gold medalist born in China.

Liddell, Lee Airui, was the son of Scottish missionaries and grew up in Tianjin, a city southwest of Beijing. At in the 1924 Olympics in Paris, Liddell, a devout Christian, found himself unable to participate in the preliminary heats for his own event, the 100-meter race. Instead, he made a last minute switch to the 400-meter contest. He not only won the race but set a new world record, and became a symbol of personal faith as well as athletic brilliance.

Returning to China, he became a coach at the Xinxue School in Tianjin, a mission school that is now Tianjin’s Middle School #17. During World War II he was imprisoned by the Japanese in north China. He died there, in the land where he was born, and today a plaque in Tianjin commemorates the home of Lee Airui, China’s first Olympic medalist.

“Fan Hong’s credentials as a historian of Chinese sports in both the Nationalist and the Communist periods are very nearly unrivaled.  Karen Christensen’s credentials as the editor of major works on sports and Asia are absolutely unmatched. With an assist from Duncan Mackay, Hong and Christensen are a high-scoring Dream Team.” – Allen Guttmann, Amherst College, Massachusetts, recipient of the first International Olympic Committee award for sports history.

FAN Hong is the director of the Irish Institute of Chinese Studies at University College Cork. She was born in Sichuan and trained as a swimmer in Beijing before pursuing an academic career in the UK. Her young son now trains in China as a swimmer. Fan’s recent publications include Sport, Nationalism and Orientalism: The Asian Games (Routledge).

Duncan Mackay is a British sports journalist who studied Chinese at university. He has covered every Olympics since 1992 in Barcelona, writing for the London Guardian and other publications and is involved in preparations for the Olympic Games in London in 2012.