Great Barrington, MA – COVID-19 has delayed the launch of a record-setting marketing deal expected to boost international appreciation of English and European cheeses. The image and words of the Nobel Prize winning poet T S Eliot, as well as characters from the musical Cats, will be used to promote cheese and cheese products throughout the world. 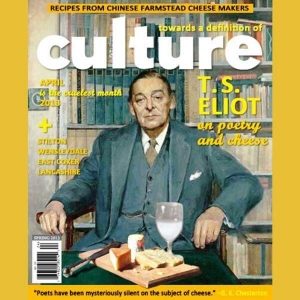 The $50-million campaign, inked by the T S Eliot Foundation with a consortium of international cheese agencies, had been scheduled to launch in May 2020 (because April is the cruelest month). The cover of the April 2020 issue of culture, an acclaimed cheese magazine, is shown below. It features the well-known portrait of Eliot, now housed in London’s National Gallery, tucking into a selection of traditional British cheeses.

Consultant Karen Christensen says the delay could in fact provide valuable new material for the marketing effort, due to startling scholarly discoveries in a newly unsealed archive of Eliot love letters.

It is well-known that Anglo-American poet T S Eliot’s devotion to cheese was a key aspect of his identity as a British citizen. Scholars thought his first piece of writing about cheese was a letter published in The Times in November 1935. What was revealed only in January of this year is that Eliot’s passion for cheese is mentioned in his love letters to Emily Hale, the American drama teacher whose archive was sealed at Princeton for over 60 years.

Eliot spent the summer of 1935 in Gloucestershire with Hale. The letter published in The Times later that year refers, perhaps suggestively, to the “hotels and inns of Gloucestershire.”

The lovers famously spent a day walking in the grounds of an estate called Burnt Norton. Scholars wonder if the cautious Eliot used cheese as a way to write to Hale about their intimate experiences. In one newly discovered letter, recalling their time together, he wrote, “Surely Burnt Norton would be a very fine cheese, rather like Double Gloucester but softer, creamy on the tongue, with a hint of smoke in the rind.”

Because the Princeton library is now closed and only editor John Haffenden has access to a digital copy of the 1,100 letters, we won’t know until 2021 or 2022, when a volume of Eliot-Hale letters is published, if Eliot wrote further letters about cheese to his American paramour.

As part of the marketing agreement, Andrew Lloyd Webber will add a song about mice and cheese to the next stage production of Cats, and billboards will show characters from the musical with their favorite cheeses. Growltiger, naturally, loves Stilton.

Berkshire’s CEO Karen Christensen, who worked for the Eliot Estate in London and who shares Eliot’s belief that one should “Never commit yourself to a cheese without having first . . . examined it,” will be the campaign’s consultant on China, Asia, and emerging economies.

Other product endorsements are expected this spring. Among them, according to sources close to the Estate, is a line of clothes from Ralph Lauren that will echo the transatlantic styles of the 1920s. The great poet was known for his discreet but dashing sartorial style.