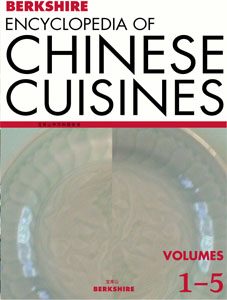 We’re delighted by the response to news that we’ve begun work on the five-volume, 1.5-million-word Berkshire Encyclopedia of Chinese Cuisines, the definitive guide to the world’s most varied culinary terrain. The five-volume encyclopedia will be a “treasure mountain library” (that is a translation of 宝库山, our Chinese name), containing everything about Chinese food and food culture.

The Encyclopedia of Chinese Cuisines will have regional editors and associate editors in addition to the advisory board, and we expect to have hundreds of authors from around the world. Articles will be signed essays written by scholars, similar in layout and style to those in the Dictionary of Chinese Biography. The encyclopedia has been designed with a number of ancillary publications in mind, including a recipe website, cookbook series, and co-publications with Chinese and Western partners.

Agricultural issues, food safety, and sustainable eating will have considerable space in the new work. Traditional Chinese medicine and perspectives on health and food will also be covered extensively.

While Karen’s study of Chinese cuisines is new, she has had a lifelong involvement with food and cookery. Her first job was as a private cook in the Silicon Valley when she was fourteen, and she cooked professionally throughout high school and college. Her only experience with Chinese cooking was under the tutelage of a US general’s wife who had lived in Taiwan for some years, and taught Karen her version of Peking duck. In her last year at UC Santa Barbara Karen cooked for a retired Disney film director and his wife, who often said she would invite their neighbor, Julia Child, to dinner so Karen could cook for her. When Karen graduated and left for London, she wasn’t sure if she was sad that that never happened, but today, of course, she regrets not having met Child.

Karen moved to London after college and wrote extensively about food and agriculture in a series of popular environmental books, the latest of them The Armchair Environmentalist (Hachette 2008). After returning to the United States, she founded the Slow Food Berkshires Convivium in 1997 and soon afterwards began work on her brainchild, the Encyclopedia of Modern Asia, which took Karen and her family to China for the first time in 2001.

About the same time, Karen planned a world encyclopedia of food. In the course of that planning phase, she attended an International Association of Culinary Professionals conference and corresponded with many food experts. The project was shelved when Scribners announced their forthcoming Encyclopedia of Food and Culture, which was too similar in scope. But Karen remained fascinated by the idea of a massive food encyclopedia, and turning to the Chinese table is a natural step for her and for Berkshire Publishing. Karen was also senior academic editor of the Encyclopedia of Community, published by SAGE. Her own research is focused on guanxi and social connections, which also draws her into the world of food and eating. The conviviality of Chinese food culture will be highlighted and celebrated throughout the pages of the encyclopedia.