Home>Berkshire Bookworld>Book reviews>Kerry Brown reviews Why Mahler? How One Man and Ten Symphonies Changed the World by Norman Lebrecht
Previous Next

The music critic Norman Lebrecht’s title to his study, Why Mahler? How One Man and Ten Symphonies Changed the World (Faber and Faber 2010) has the sort of in-your-face tone that characterises the rest of the book. He makes the sort of claims about Gustav Mahler that the literary critic Harold Bloom in his dotage made about Shakespeare – that he created the modern world, foresaw world wars, constructed the future, and so on. We get the passionate commitment behind these sort of statements, but really? Can they be even remotely true? 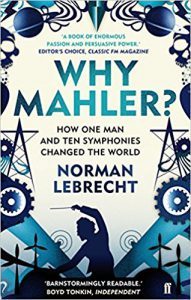 In fact, Why Mahler? is, for its first three quarters, more a biography of one person’s admiration for another. The final quarter is an already somewhat dated review of various recordings made over the years of the ten symphonies and the song cycles. The biography is helpful, although a bit disconcerting because it is mostly written in the present tense. I suppose that is one way of giving the work and the life that it came from, from a century before, some kind of contemporary currency. That, or it is rendered in this way to make readers think Lebrecht was actually present at events which clearly occurred decades before he was born!

Lebrecht’s dramatizes Mahler’s life well and links the separate epic pieces with the phases he was going through – from Vienna to New York, and then, struck down before the age of fifty by a terminal illness, his final moving return to Europe and death. The account of the short meeting a year before his demise in 1911 between Mahler and the newly prominent psychoanalyst Sigmund Freud in, of all places, Leiden, is compelling. But again, Lebrecht makes some big claims about the impact of this “informal consultation” – Freud presenting a choice between renunciation of art or death. And of course, to fit the tragic tone of the rest of the account, Mahler goes marching on to death, carrying on composing.

The material on the relationship with Alma Mahler is interesting too. I don’t think anyone could listen to the Ninth Symphony after hearing about the context of its creation and not feel it wasn’t some kind of cuckolded husband’s lament. But reality was more prosaic, because Alma’s lover was riddled by guilt, according to Lebrecht, and in any case her own accounts are famously fanciful and hard to fully trust.

Which might also be one way of looking at this book. Lebrecht is a critic and a controversialist, and makes interventions on almost every page, about his own links with figures or places that Mahler knew. So much for the sublimation of personality that he soothingly praises as some of the great attributes of Mahler’s work. In this account, Lebrecht is with us every step of the way, like some garrulous companion who won’t shut up and just let the music or the life of the person that created it speak for itself. I don’t know the answer to “Why Mahler?” so clearly after reading this book – but I certainly have a lot of ideas about “Why Lebrecht likes Mahler?”