Aged about 19, I spent part of one summer reading the Penguin translations of the novels and short stories of Ivan Turgenev. That sits a bit stark in the memory now, because despite the exquisite impression they made, with their delicate descriptions of gentle disappointment and bitter sweet love, I never went back and reread them until about a year ago when I had a look at Torrents of Spring (Penguin 1980). That reopened something, because after a three decade gap, the original depth of response returned. It would be hard to be human and not find the description of a landowner sucked into complete moral enslavement to a “femme fatale” terrifying, but also a little whimsical and perverse. Was ever emotional pain made to sound so gorgeous and fulfilling? 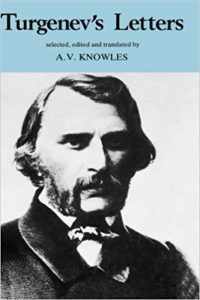 Finding Turgenev’s Letters translated and arranged by A. V. Knowles (Bloomsbury Academic 2000, originally published by Athlone 1983) in a Canterbury second hand bookshop over last summer meant for the first time I had an excuse to know a bit more about the life of the author of these near perfect, crafted tales. So it was not surprisingly, but at the same time a little bit surprising, that Turgenev, from the testimony of these letters, nursed a long term obsessive love for the married actress Pauline Viardot, ever so like the Torrents of Spring tale. Many of the letters here are written to her. In his final years he also grew close in similar circumstances to a much younger actress, Marya Gavrilovna, though, movingly, it was Viardot and her daughter that attended him when he died.

His letter to his daughter are business-like, dutiful and hectoring. She married a very useless industrialist in France who ended up becoming an abusive alcoholic, forcing her to flee. But the real revelation is just how cantankerous and easy to fall out with people Turgenev was. He had bust ups with Tolstoy, Dostoyevsky, and then a range of lesser figures. A good subtitle of this collection would be “Portrait of the Artist as a World Class Malcontent.” Some of the epistles to Tolstoy are loaded with invective laced with literary flourishes and courteous declarations of fidelity and admiration and love. That makes them all the more cutting.

There is scene in, I think, Thomas Hardy’s Jude the Obscure (1895) of the aspiring writer tracking down a novelist he was a big fan of, going to their house, and being met by a truculent, underwhelming shrew who shushes them from his doorway impatiently. Nothing falls heavier and faster than an idol knocked off their pedestal. I have to say though, I’m a bit upset that this very vague notion I had of Turgenev the person from that reading marathon 30 years ago is now replaced by a more informed, and much more demotic idea of the man. As Turgenev himself wrote in one of the letters: “If I want to understand other people I always listen to what their enemies say about them.” It seems in this case, if you do want to understand Turgenev, then do the same, and simply read what he wrote about himself. Few people seem to have been set upon their own destruction with such zeal. Thank God he left such amazing works in the wake of this behind.