Home>Berkshire Bookworld>Book reviews>Kerry Brown reviews The Tale of the Axe: How the Neolithic Revolution Transformed Britain by David Miles
Previous Next

In the wet spring of 1991, I spent a week travelling around ancient earthworks and Iron Age forts. It was a somewhat esoteric interest I had developed then with a friend, and we managed to haul my ramshackle Ford to places like Maiden Castle, Cadbury (regarded as a likely candidate for the Arthurian Camelot – if Arthur ever existed) and then the great Avebury and Windmill Hill collection in the south-west of the United Kingdom. 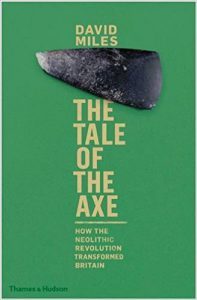 David Miles’s The Tale of the Axe: How the Neolithic Revolution Transformed Britain (Thames and Hudson 2016) is an up to date account of the kind of social developments that led to the construction of these great landmarks. As he says towards the end of the work, they seem isolated and, sometimes, somewhat haunted and forlorn today, but even the most remote of them geographically – the Orkney Island homesteads and monuments for instance – would have been located in dense social, religious and economic networks.

Of course, the evidence for that is now mostly gone. The chapter he has on Stonehenge shows, however, how much can be inferred from carbon dating, aerial surveys, and simple inference. It is quite incredible that objects at, for instance, the Kit’s Coty tombs in Kent can be dated so accurately to two waves of internments, in the fourth millennium BCE.

This is an accessible book about a history that, because of its scope and distance, is often hard to conceptualise. What did people believe then, how did their societies function, and how can you make sense of the long transformation from hunter gatherers to settled agriculture? Plenty of historians regard the rise of farming as a disaster from which humanity never really recovered. Miles addresses this point in his last chapter. You might say the same about the rise of industrialisation. Friedrich Nietzsche with his usual counter-intuitive flare declared in Ecce Homo that Christianity was a catastrophe that finished us all off. The last five thousand years have seen a fair number of examples of humans heading for the exit. But Miles’s pragmatic conclusion is that had we not taken the farming route, what future was there for us? Some other species would have overtaken us. In the Mesolithic era, he argues, the number of chimpanzees, our closest relatives, and humans was probably about the same. In 2015, there were seven billion of us and 150,000 of them. On that basis alone, I guess humanity has been a success.

The most haunting illustration in this book is on page 89. There he shows three polished limestone masks found in Israel from ten thousand years ago. They are utterly remarkable, probably associated with rituals at the very start of human kind’s agricultural odyssey. Oscar Wilde said that if you wanted to ever get a human to tell the truth, then ask them first to put on a mask. Despite everything else, that habit has been maintained, linking us now with people from so long ago they might as well be from different planets. Perhaps Miles’s next book should be simply a history of masks. Or maybe there has been so little change over ten thousand years there is not much to say on this.