Home>Berkshire Bookworld>Book reviews>Kerry Brown reviews Story of the Stone, or Dream of the Red Chamber by Cao Xueqin, translated by David Hawkes and John Minford
Previous Next

For me, 2017 will go down as the year I finally managed to make it through the David Hawkes and John Minford five volume translation of the Story of the Stone – （石头记) or , as it is more famously known, Dream of the Red Chamber (红楼 梦) (Penguin 1973–1986) by the Qing writer Cao Xueqin （曹雪芹). 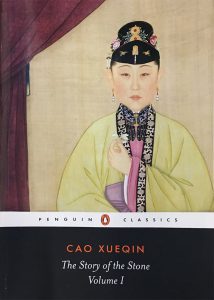 This has been called the Chinese equivalent of War and Peace – a work central to the canon of Chinese literary culture. C. T. Hsia, the great literary critic who did so much to introduce western evaluative methods to Chinese works, as well as what he called the six great Chinese literary works of the last thousand years to a non-Chinese speaking audience, gave The Dream pride of place. He did so because, he argued, it was the only classical Chinese work that had a sophisticated understanding of human psychology. This helped it transcend the cultural boundaries it was located in.

They are, it has to be admitted, pretty formidable boundaries. The book is set in two main households, the Rong and the Ning – and needs a deft appreciation of the dense family networks that link the members of the main, and subsidiary, clans. The protagonist, Jia Baoyu （贾宝玉) and his protracted, ultimately tragic relationship with Lin Daiyu （林黛玉) create the main narrative focus of the work. But in the English version, running to over 2300 pages, it is little surprise that this fades in and out of sight as the reader travels along the vast, often confusingly pathway that Cao Xueqin has provided.

There has been a mountain of critical work on The Dream. Even Jiang Qing, the benighted wife of Chairman Mao, in the now infamous interviews with Roxanne Witke in the early 1970s, put her pennyworth in, arguing fiercely that the novel was an illustration of feudal oppression. The best that a total novice like me can hope for is to simply acknowledge how helpful reading this work has been in digging into the issue of that vexed question of what a Chinese world view might be, and what its archaeology is. The most moving parts of the whole vast edifice, for me, were those dealing with the irrevocable movements of fate, of the moral challenges of individuals facing this and yet still needing to make decisions that matter and give meaning to their lives, and of the supreme importance of human relations within Chinese culture. I was also impressed at the beginning and the end by how much the supernatural intervened in the daily affairs of the families being chronicled. That finally explained the word “dream” in the title – because it truly portrays a world in which emotions and the life challenges of people are illusory, fleeing and impermanent.

It’s a hard haul, it has to be said, but cumulatively the impact of this work is overwhelming.