One of the great pities about the resurrection of Confucius in contemporary China after his demise under the Maoist fire of the Cultural Revolution is that his philosophy has been so heavily politicised, it has ended up being deeply unattractive. 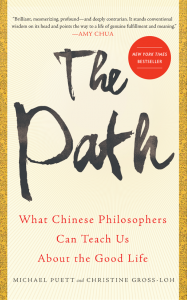 Harvard historian of China Michael Puett and journalist Christine Gross-Loh in The Path (Simon & Schuster 2016) have done a great service, firstly, in introducing depoliticised Confucian ideas related simply to the business of daily life. Secondly, they have managed to show, in really clear and accessible language, how Confucian thought existed among a constellation of other thinkers over the late Zhou and Warring States period 2,500 years ago (approximately 400-200 BCE). They present a spectrum of life outlooks, from the mysterious Mozi (apparently named thus because he may have been an ex-criminal and therefore had tattoos) to the more systematic Xunzi, the utterly elliptical and mystical Laozi, and – my personal hero – Mengzi (Mencius), one of the greatest thinkers humanity has ever produced. It really is a pity that it was not his work, but Confucius’, that came to dominate Chinese imperial history from the Song era onwards.

This book argues, elegantly and with great simplicity, that the very fact ancient Chinese thinkers were not systemisers, and did not try to build up vast empires of metaphysics and ethical thought is what now, in an age of doubt and fragmentation, makes them newly attractive. Their work was centred on human dynamism, adaptability, and the ability to create new frameworks to pragmatically see things; not attempts to pin things down and strive for some dominant, permanent notion of truth. The interpretation of Confucius as someone who promoted ritual and conscious reformation and adaptation of behaviour for a better life does resonate with contemporary people living in a time when overarching moral codes have been almost eroded out of existence.

This short book is, however, valuable because it makes available to a wide public (it is, at the moment, plastering many Waterstones window fronts across the UK) a series of vastly significant thinkers in ways that portray them as accessible and useable in one’s daily life, instead of existing in some intimidating context where they are unapproachable and alien. For that reason, Pruett and Loh’s endeavour is a worthy one – even though one can’t help but wonder if some of the dismissal of what they call Western, protestant, human-centric culture is a little simplistic. I guess the best you can do sometimes is just to try to keep things simple, which is what this book strives to do.