More Sex, Lies and the Ballot Box: 50 Things You Need to Know about British Elections, edited by Philip Cowley and Robert Ford (Biteback Publishing 2016) has about 50 short essays by those despised “experts” that Secretary of State Michael Gove berated in 2016 during his own 15 minute stint at being famous. The book is mercifully short on footnotes and dense referencing, and instead carves out succinct takes on things like why polls got the 2015 British general election wrong (because, the author contends somewhat underwhelmingly, sampling privileged Labour over Tory voters), what role immigration plays in electoral decision making (consistently high) and why the British first past the post system has managed to create an outcome where increasingly large numbers of constituencies are never likely to change the allegiance to one party over another. 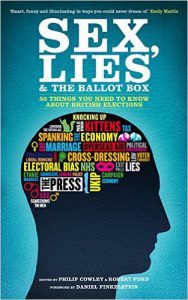 Inevitably, the Brexit debacle looms large in many of the contributions. One of the final ones addresses the issue of why the EU and immigration became firmly linked in voters’ minds in 2016 in ways which were simply not true during the similar referendum in 1975. At that time. The European Economic Community, on the evidence presented here, was regarded as a totally separate issue to migration. Migration then overwhelmingly came from the Commonwealth, or through refugees. Only in the mid-2000s did the UK become a destination for large numbers of people from the new accession states of Eastern Europe. The economic crisis of 2008 only accentuated this, meaning that in all some 3.5 million new arrivals from Europe came up to 2015. That cemented the link between the EU and immigration in many voters’ minds. We are witnessing the fallout from this today.

Commentators these days keep on talking about “post fact” politics. But I think the reality is that there are too many facts, rather than none, and the issue is more about what frameworks and interpretative contexts to give the facts that are hurled at us from almost every direction. After all, on some level facts are simple interpretations – they make sense within a framework (look at Payl Feyerabend’s Against Method for a great statement of that). Our issue is with some agreement on how to interpret, rather than simply eschewing the very existence in the first place of things being true or false.

One of the most interesting entries in this book concerns the very, very feeble attempt under Japanese Prime Minister Abe to encourage more female participation in political life and directorships of large companies in recent years in Japan. The chapter gives some dismal statistics, too depressing to repeat here, showing how far this has failed. But it concluded with the brutal but true line: “Japan will continue to provide the world with an example of how male chauvinism can slowly, but surely, kill off an entire nation.” Nothing post-factual about that. Just a great statement of pure, unmovable, unshakable fact!