Almost exactly two decades ago when I began my somewhat short-lived (eight years) stint as a member of the Foreign and Commonwealth Office, I had an encounter with my first boss – a much stressed out mandarin, who made the comment one day that he had “no idea what most people did during their working day”. It was a pretty penetrating question. What do people do when they actually work? Certainly, with open offices and all the paraphernalia of post-capitalist life, you’d think we would be better informed about the working activities of others. But it’s still a mystery what people get up to, especially those fascinating species – the perpetually busy but not that senior. How can they always look so immensely occupied? How do they make such a splendid drama out of their working day? And recruit others into it. 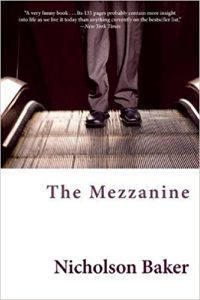 I have read the American novelist Nicholson Baker’s hilarious novel The Mezzanine (Grove Press, reissue edition 2010: originally published by Weidenfeld & Nicolson 1988), and I now understand the answer to the question of what people actually do when they work. I’ve managed to blissfully liberate myself from any settled office environment for over a decade now. But his descriptions of a day in the life of a man simply doing things in an office have the smell of truth about them. The one thing he makes pretty clear is that (1) ninety-five per cent of the time, the last thing anyone is thinking about at work is work and (2) the things they are thinking about are usually sublimely trivial. And that is very reassuring.

I am particularly pleased that this novel has taught me I am not the only person to have puzzled over why at home toilet seats are continuously round, but in public places they are often a horse shoe shape. I won’t spoil the plot by setting out the reasons why he thinks this design feature differs. Nor could I possibly go too far into his absolutely side splitting analysis of that other perennial mystery – why public lavatories on the whole don’t have piped music or some other sort of noise screen.

The thing that is truly wonderful about this book is the joyous descriptions of small, mundane, demotic things; the fascination with the fabric of everyday life – coin holders, vending machines – and finally, the epic description of elevators over several pages. This man really is a poet of the landscape of human work in the modern era. It was an utter joy to have come across this book and to know that there is at least another person out there perpetually puzzled by the weirdness of everyday life.