Filling the hours of torpor and inertia brought on by a mild but debilitating cold by reading the final volume of Samuel Beckett’s Letters 1966-1989 (Cambridge University Press 2016) was perhaps not the most straightforward way to maintain good spirits. But in the end, this monumental, scrupulously edited final volume (three have appeared before) worked well. 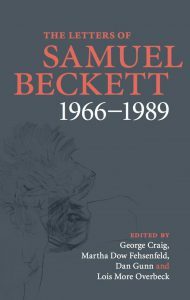 One of the reasons is perhaps the way in which the author of these letters refers almost incessantly to his own non-importance. He rebuts writer Deirdre Bair in the early 1970s from her desire to write his biography by telling her there was nothing remotely interesting about his story and that she was wasting her time. He maintains this line throughout the following 700 plus pages. As the Introduction makes clear, this was not entirely true. Beckett had fought very heroically in the Second World War with the underground French Resistance and had, prior to that, known most of the key modernist figures in Paris, the most important of which had been James Joyce, to whom he had been secretary. Even so, Beckett’s utter disdain for any interest in his own life path, and his dismissal of its importance in an era in which celebrity storytelling and self-dramatization have become endemic, and almost paralysing, is exemplary.

The other wonderful aspect of these letters is the way in which they show how profound and enriching Beckett’s commitment to his relationships was. He was able to build incredible professional links across the world and displays, in many of these letters, a warmth and solicitude which stand at complete odds with his austere public persona. These are no missals from some solitary hermit, but letters sent out to a huge range of people, and most of them very warm and caring.

Finally, inevitably, there is the language. The period 1966-onwards covers the late works with their concision, paring down of content, ripping out from even the simplest sentence of extraneous or superfluous meaning. The letters of course are not works of fiction or intentional literature – as the prose and plays are – but they share the same characteristics in terms of their very bare, very still language. None are more than a few words towards then end. Many are just a sentence or two. These sentences are often only a few words. But they are powerfully expressive.

The final “trilogy” (though Beckett resisted this description) of Company, Worstward Ho and Ill Seen, Ill Said are amongst the greatest written products of post-modernity, and I am still moved and amazed reading them now as when I first encountered them in the mid-1980s. To know now in more detail how their creator was during the time when he wrote them is a wonderful thing. The cumulative effect of these letters is one which is powerfully moving. As Beckett himself famously said, the function of his work was to leave “a stain upon the silence”. And these letters are one hell of a stain.