Søren Kierkegaard has been a figure that I have felt, since first encountering his work during a year trying to study philosophy at Cambridge in the mid-1980s, I should have liked more. The themes, the literary treatment, the playful use of pseudonyms, and the relentless focus on humanity’s religious fate, were all powerful and appealing themes. But Either/Or and the interminable discussion of Don Giovanni put paid to the early attempts. And so things remained until I started to read these Journals (Harper Torchbooks 1959, originally published in 1938). I can now declare that I am in love. 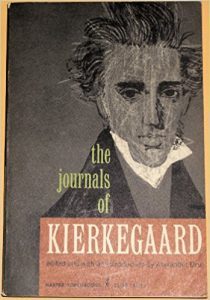 First, a practicality. The edition I have read was edited and translated by Alexander Dru and came out in 1938. Assumptions about readership literacy levels have evidently declined since then. German, Greek and French phrases used in the original are left vibrantly untranslated by Dru. It’s nice, even if erroneous, that an author doesn’t assume their readers are idiots.

In terms of content, however, the Journals, because they are rooted in Kierkegaard’s daily life never stray too far into abstraction. And they return to themes of love, loss, and emotional encounter with enough of a regularity to make the huge collection coherent and seem, even if accidentally, part of one work. There are even surprising moments of humour, as when in 1836 Kierkegaard sourly notes about the universalist pretensions of Hegelian dialectic that perhaps this should be applied to the making of boots. Presumably it could! Some of the entries have the epigrammatic nature of works by late Wittgenstein – was there a direct influence? And then there are the moments of simple transcendent clarity, which any reader would expect: 1847 – “For it is the duty of human understanding to understand that there are things which it cannot understand”.

In amongst all of this are grouches about the smallness of the world of Copenhagen when Kierkegaard lived there, and then haunting vignettes of encounters, like the one of a woman walking along the same path as the writer some mornings, but never speaking to him, from later in the book. On the whole, though, the great theme that keeps resurfacing throughout the years this work was written was of the failure and self-renunciation of his early engagement, and the very diverse ways this continued to haunt him until the end of his life. And haunting, in any shape or form is a great thing. We are all haunted too much, and too little aware, or willing to be aware, of why. Kierkegaard has certainly become my main ghostbuster.