Kerry Brown reviews I Ching: The Essential Translation of the Ancient Chinese Oracle and Book of Wisdom translated by John Minford

Home>Berkshire Bookworld>Book reviews>Kerry Brown reviews I Ching: The Essential Translation of the Ancient Chinese Oracle and Book of Wisdom translated by John Minford
Previous Next

Kerry Brown reviews I Ching: The Essential Translation of the Ancient Chinese Oracle and Book of Wisdom translated by John Minford

I started 2017 by ending a reading of John Minford’s magnificent translation of the classical Chinese uber-text, The Book of Changes (I-Ching, or, in pinyin, Yijing): I Ching: The Essential Translation of the Ancient Chinese Oracle and Book of Wisdom (Viking 2014). 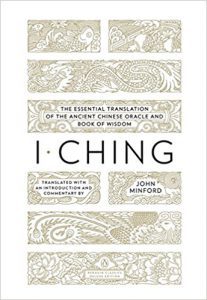 Minford finished off the great Penguin translation started under his father in law, David Hawkes of The Story of the Stone in the 1980s. He told me, when we lunched a couple of years ago in a Chinese restaurant in Canberra, that this venture, embarked on when he was a young man, had driven his great classicist father in law almost beside himself with frustration because he had been so delayed with the work. But since its publication, he has become probably the world’s most respected translator of a variety of classical Chinese texts into English – a particular favourite is the eerie collection of ghost stories by Pu Songlian from the Ming dynasty. I-Ching maintains these high standards. Minford has proved a worthy successor to Hawkes.

Part of this success derives from the eclecticism that Minford brings into his work. A look through his introduction testifies to this, with references to the wonderful dystopian fantasy of the early 1980s, Ridley Walker by Russell Hoban, a work set in the post-nucleated Kent (of all places) and written in a style of English as damaged and combusted as the hydrogen atoms summoned to create destructive fusion in a bomb. There is logic in this sort of reference, because once the reader leaves Minford’s calming hands and ventures into the text itself, the immediate impression is of almost infinite suggestiveness where everything could be, and is, relevant. Birds fly heavenwards. Kings wander and fail to return home. Calamities are averted, or happen, depending on whether or not the household or court door is left ajar or clouds correctly coalesce. This truly is a text about, and engaged with, the operations of fate. It is therefore a book about everything and the connectedness of everything.

These texts come from the earliest dynasties, harking back to the Shang and Zhou eras (1000 BCE), where myth rubs against tantalising glimpses into real events. In Taipei, at the National Museum, a place Minford himself recognises as the greatest collection in the world of Shang era bronze vessels, there is a huge early urn with a large amount of script written across it. In this sort of material residue from another distant age and a very different culture, you peer into the vessel as you would into some extraordinary passageway back into time itself. The Book of Changes has that combination, in this translation of the concrete and the elusive – always helped along by Minford’s discrete, wise but deeply learned commentary.