Eliot Weinberger has produced essays and translations ranging across cultures and languages. In a hybrid age, he is truly representative of a hybrid intellectual posture and approach. This short series of essays written over the last two decades, The Ghosts of Birds (New Directions Press 2016) exemplifies this, with pieces which are in the form of poetry, prose and then bibliographical entries – albeit somewhat whimsical –, with, as the final testimony to his wide ranging but deeply engaged interests, a glossary of obscure terms right at the end to help readers as they proceed, often stumbling but always excited with anticipation, through what has come before. 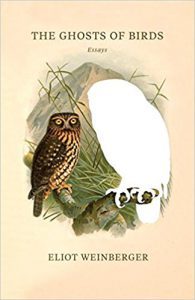 The notorious review of George W. Bush’s memoirs, with the claim that they are a post-modernist masterpiece – not least because, as Weinberger points out, Bush seems to have taken the Derrida injunction to do away with the author to a new level, actually having the whole book written by someone else and then simply adding his own name – is one of the most contemporary pieces. Elsewhere though, he gives fascinating accounts of the strange career of polymath Herbert Read, or of the devastating Mongolian conquests of the 12th and 13th century, and the curious phenomenon of the claim that the Yuan Dynasty somehow created from this inferno of cruelty and destruction a new kind of Chinese culture. For those of us faced with the Trump bling Armageddon, Weinberger’s crisp chronology of the hell visited by Genghis Khan and his armies is a reminder that, to put it lightly, things could be worse. In one central Asian city, according to one of the few survivors, “only dogs were left to bark on the streets”. The Mongolians literally levelled and annihilated a world.

Weinberger is a very wonderful translator of Chinese poetry, and his essay on the great I-Ching from the Shang dynasty, and on the original reception to the story of the life of the Buddha in the West are masterpieces of concision. The I Ching with its mysterious, gnomic utterances from the dawn of Chinese civilisation, rendered into English by the scholar John Minford, whose work Weinberger appraises in this collection, is a reminder of the richness, the diversity and the sanity of so much Chinese literature. This is one of the great inheritances of humanity, and works like that by Weinberger makes it accessible to those who cannot read Chinese. But, more importantly, it also makes it intellectually and culturally accessible. We do, after all, speak the same discourse as far as emotions, aspirations, fears and dreams go, whatever the differences in the outwards forms between our languages.