Enough Said: What’s Gone Wrong with the Language of Politics (Bodley Head 2016) is about a very important subject, and Mark Thompson outlines that reasonably enough. Public discourse now is degraded – or so Thompson believes. We only have to witness the linguistic carnage that occurred during the recent elections in the US. Public trust in what political figures say is as low as it has ever been (though Thompson points out that even during the Second World War, surveys showed that public views of politicians were almost as infected by distrust then as they are now). 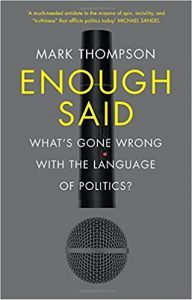 Part of his diagnostic involves looking at the impact of social media. The fragmentation of fora once accepted as the main spaces for debate and commentary – mainstream newspapers, etc. – has meant that there is, he claims, a lack of robust, authoritative voices. And everyone can chip in. He gives some grimly representative illustrations of the sort of enraged, spluttering, barely comprehensible stuff that passes for reaction and comment on public posting pages. Twitter and other platforms only hone this down – they don’t reduce its toxicity.

There is the obligatory mention of George Orwell and his own campaign for clearer political language from the 1940s. And then some interesting references to the ways in which figures like Ronald Reagan in the US managed to intuitively read the public mood and speak to that. There is even a completely chilling quote from a speech by Adolf Hitler that would pass muster in most nationalist political discourse today.

This book though ends up in its final third being disappointing. There are chapters of preachy material about how all of this might be addressed. The main thrust seems to be to implore a bit more restraint from content providers, content users and content platforms. It is all very civilized, but also, strangely, a bit discordant with the previous part of the book that had shown so clearly just how bad public discourse has now become.

Maybe people have always been moaning about the way others speak. There weren’t even formal rules for grammar or spelling in Shakespeare’s day – thus the moan by Dr. Johnson that his works were ungrammatical and incoherent in places. Quite why we are haunted by this golden era of high standards of public expression, when one considers that the evidence for this comes from material that was read by a tiny number of people, is a bit of a mystery. Not once does Thompson mention a very simple fact – in developed societies at least, people have never written so much in ways which has at least some kind of permanency, as they do now. The fact that the overwhelming majority of it is dross is neither here nor there. Had people in other ages been able to do this, the outcome would no doubt have been the same. In the twenty-first century, we can’t pretend that humans write a lot of rubbish – we can know it. This book clearly isn’t rubbish, and parts of it are interesting and provocative, but it could have been way more imaginative in its conclusions. Underwhelming.