Diplomacy and international relations are clearly a complex area. This is logical enough. Relations between two single people are enough to have inspired a large swathe of diverse literature. Magnify that by hundreds of thousands into the millions and you get the picture. It’s complicated. 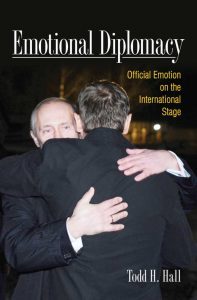 Todd Hall’s Emotional Diplomacy (Cornell 2015) starts off with a reasonable enough premise: there is a huge role in state-to-state relations for a range of emotions and incentives that simply do not figure in the standard, highly rational, strategy-based literature. The latter is all about actors working out discrete, self-interested, well-defined plans, and either succeeding, or failing.

What Hall sees is an unacknowledged level where states, as states, assume certain emotional postures. And they use these – performed through their main political and bureaucratic agents – to achieve key aims. The three particular conditions he talks about are anger, sympathy and guilt. No prizes for guessing that for anger, China figures as the main example, with an overview of its splenetic response during 1995 and 1996 to President Lee Teng-hui visit to the US, and then to the first democratic elections held in Taiwan.

China’s deployment of the language, theatre, and tone of anger is legendary. Partly, this is due to the state media’s ability to adopt one uniform tone of rage. It is also because, to be honest, at that time Chinese had a lot to be angry about. Chris Coker, professor at the London School of Economics, characterises this with the more nuanced term “resentment”. We had a joke when I was a diplomat and caught some of the tail winds of these rants from Chinese diplomats that the UK should apply to the Guinness Book of Records for how often we had been accused of “hurting the feelings of all Chinese people.”

Sympathy and guilt prove a bit more elusive. For the former, Hall uses the sympathy shown by Russia and other erstwhile foes of the US after the September 11, 2001 attacks. In fact, for all the – no doubt sincere – outpourings of sympathy, you do have to wonder if standard politics wasn’t running underneath, albeit from the most unexpected direction. It was the US that was to gain a massive foothold in central Asia when it rolled out the war against terror, something that Russia originally allowed, and then reacted strongly against. Today, we live with the backlash. The one conclusion you could draw from the treatment of sympathy here is to use it sparingly, and briefly.

For guilt, Hall focusses on West Germany and their eventual rapprochement with Israel after the Second World War. Most of this story was new to me. Due to the Nazi era crimes against the Jews this was, as the book says, a “special relationship” in which West Germany’s leaders needed to adopt a very specific stance. They were not directly guilty for what had happened prior to 1945. In fact, some of them like the truly amazing German Chancellor Konrad Adenaur (this guy has become my total hero) had actively and courageously worked against the Nazi regime. But they did understand that Germany had to do something huge to start to redeem itself and address the horrific history.

This book is reasonable enough, but I am puzzled why it doesn’t acknowledge more of Richard Ned Lebow, the American political scientist’ immense, splendid, and very relevant work on cultural diplomacy. It is written in a different sort of language, but the way Lebow talks about honour, and non-rational drivers in foreign relations surely should have been given some airing here. I am also a little unconvinced about the real link between postures which seem emotional and their diplomatic outcomes. Still, Hall is right. This is a much unexplored area, and the book is a clear, well-written overview.