Since the first unification of China in 220 BCE under the Qin dynasty, the issue of how such a diverse, disparate entity – something more akin at times to an empire, or a continent, than a country – governs itself has been the source of perpetual fascination. 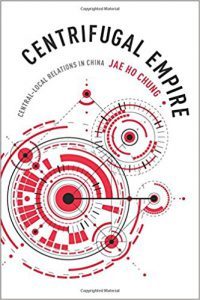 Under the Communist Party since 1949, everything has been reconstructed and modernised. But as South Korean political scientist Jae Ho Chung makes clear in Centrifugal Empire: Central-Local Relations in China (Columbia Press 2016) the long shadow of imperial rule still casts itself across the present day. Alone of major countries of any size, China does not have a federal system. Based on the fierce declarations against adopting this deployed by the country’s current leaders, it is not likely that this system will be used any time soon. And as with Imperial China – though there were huge exceptions, as Chung points out, with the Yuan from the 13th to 14th century in particular being a period when local government was almost annihilated – the fundamental importance of counties and then provinces was a constant phenomenon. In the 20th century, the extra level of prefectures and then townships were added, but these are perhaps the weakest and least meaningful layers of government.

Central local dynamics is a hugely important area in China, but one that gets very little attention. As Chung points out, the feature of the Maoist era was a staggering amount of centralisation of powers, fiscal and otherwise, meaning that local officials were simply often servants of central diktats. Since 1978, China has marched in a different direction, firstly localising powers to such an extent that by the 1990s most major economic decisions about grain targets, industrial growth and so on, were being made provincially. This saw the rise of over powerful provincial leaders, and the corrosion of local government through vested interest, localised networks and what became labelled as “duke economics”. The first attempts to clean this up occurred in the first decade of this century, but under Xi Jinping there has been a major onslaught on corruption, and the incompetence of local government. Just how effective this will turn out to be is anyone’s guess.

What is beyond argument is the amazing resilience of the current Chinese system. While fiscally still highly centralised, local officials are allowed a lot more discretion than, for instance, in the UK where they famously seem only to exist in order to be mocked and set up by Private Eye! This is an excellent, and wonderfully succinct book, written on an important subject, and with great authority.