B.S. Johnson was an alumni of King’s College London. I wasn’t aware of this before I looked up something about his background after rereading Albert Angelo (Picador 2013, originally published by Constable & Robinson 1964). Until a decade ago he was largely forgotten, before the novelist Jonathan Coe (2004) did a long and well-received biography of him. Reading his works back then didn’t have much of an impact, apart from remembering the quirky things he did with the physical shape of his books – having lose pages to reorder to make the story you wanted, or holes in particular pages so you could be in one place and then glimpse what was going to happen several steps down the line. 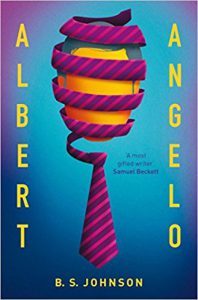 He must have been profoundly influenced by Samuel Beckett, but there is a pretty big difference. Despite his frequent use of the first person voice, especially in this work, there are no Cartesian tail winds. Beckett’s work, particularly the Trilogy, has this massive suggestion (well, pretty explicit sometimes) that it holds a sort of message about the human self, and about the basis – or lack of basis – of epistemology. His are highly philosophical works, and carry a Big Message about the Human Condition. An uncharitable view of all of this would be that Beckett’s years in France, working in French, had contaminated him with the urge to buy into grand systematic views of the world that continental philosophers seem to like so much. Descartes was one of the more modest. Look at the vast intellectual edifices put up by philosophers such as Hegel or Schelling.

Reading through Albert Angelo, this clash between a style which was so reminiscent of Beckett, and a world view which was not, was really striking. Johnson’s work is, well, just very empirical. There is a world. You describe that world with the words you have. The words, at some point, perhaps right at the start, are an integral part of that world, and shape and arrange it so they become features of it. This novel simply tells the tale of a supply teacher and his daily travails – until, close to the end, it gives up telling that tale and declares the whole lot is a bunch of lies. Along the way, there are moving passages on human dignity, and on the very reason for writing a work of fiction in the first place. But it is all very practical – the writing style, the methods, the world set out. It doesn’t stray deep into some metaphysical realm like that of Johnson’s great inspirer.

It is truly a tragedy that Johnson committed suicide so young. He might still have been alive today, though very old. His death robbed Britain of a great avant-garde, free spirit, and a highly empirical visionary. These come along very rarely now.