To anyone out there who wants to ramp up their paranoia and improve on their conspiracy theories, I would highly commend novelist and film maker Christopher Petit’s 1996 work, The Psalm Killer (Pan Books 1997). 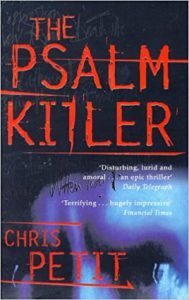 The cover image above is an affiliate link to this book on Amazon, included for your convenience. We encourage you to buy from a local bookshop or directly from publisher, or to borrow a copy from your local library. If you click through and make a purchase, Berkshire Publishing may receive a commission at no additional cost to you. Click here for an explanation.

I was alerted to Chris Petit’s work by a mention in something by poet Iain Sinclair about a decade ago to his shorter piece, Robinson. But The Psalm Killer is way more elaborate and epic. Despite being 646 pages long, however, it maintains its energetic narrative drive right till the last. There is even a twist in the last two pages. I won’t spoil the plot, but for me at least it worked pretty effectively.

Petit’s main story for all the twists and turns is a relatively straightforward one. In the mid-1980s, a British detective is working in Belfast, dealing with what initially look like a group of random killings, but which he, with a colleague, identifies as being the work of one man. For the reader, there is the usual benefits of being privileged with sub-narratives and side chapters which give the story of this killer, dating back to the dark days in the Troubles in Northern Ireland from the early 1970s. The inspiration for these descriptions, if such vile acts can be dignified with such a word, is the notorious Shankill Killings, and in particular the almost unspeakable work of their psychotic chief henchman, Lenny Murphy.

Petit’s clinical descriptions of the sort of barbarities visited on victims in the novel – some taken from eye witness accounts of real events – are stomach-churningly convincing, definitely not for the nervous, which is a remarkable testament to the concision and power of the prose he uses. But the psychological sub-narratives are also powerfully conveyed – the need to have audiences to see these acts, their reference to earlier traumas in the lives of the protagonists, and the final need to seek some sort of perverse justifying narrative.

For a literary accompaniment to Nordic noir, or for those that like novels full of hunts in darkened fields, almost omnipresent menace, and finally the book’s real tour de force – its suggestion that the whole sorry episode of the Troubles was motivated, directed, and sustained by vested interest on the British side, of whom the figures in the books were only the puppets – this is a pretty remarkable work. Just don’t read it too late at night when no one else is in the house!