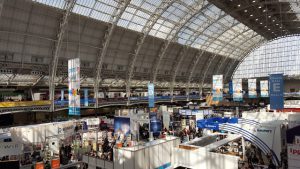 Book fairs are one of the dumber traditions of our hidebound industry. CEOs hate them. I don’t mean only CEOs of smaller independent presses, but people who run big publishing companies; I’ve known a couple of such people well enough for them to tell me that they wish they didn’t have to waste so much money on something that doesn’t make sense in the 21st century.

Events like the Frankfurt Book Fair survive because global exhibition companies find them profitable and because we are all afraid not to be there. I was talking to a colleague about the American Library Association exhibits. He said he’d love to stop going, it was a waste of money, but if he didn’t take the same stand as the year before people would think the company had gone bankrupt.

Book fairs are, traditionally, where publishers go to buy and sell rights to translate books. Today, there’s little reason for this to require in-person meetings: an agent can show her wares and exchange contracts online. But there is a reason for colleagues in far-flung industries to get together. We humans crave company and conviviality, and want to see people we work with face to face. When starting a new business relationship, it’s enormously useful to spend real time together. Body language counts, and so does chemistry. So we go to all the expense of exhibits and panels and workshops just to have an excuse to sit down with far-flung colleagues over a glass of wine. I’m wondering how the conference business can evolve to make it more productive and more sustainable. Perhaps in fifty years smaller numbers of editors (yes, there will still be editors) and media execs will travel to international meetings in solar-powered planes or airships. Instead of book exhibits and boring speeches they’ll meet in a permaculture pavilion with floating pods equipped for 3D conferencing. 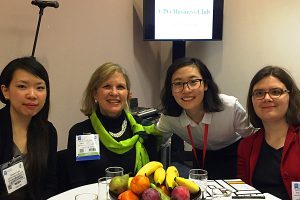 Guanxi at the London Book Fair

Here’s a photo from a meeting with the Encyclopedia of China Publishing House, part of the China Publishing Group. My mission this year was to meet with Chinese publishers with whom we’re discussing co-editions and other joint projects, and to get some ideas about how to develop our international rights business. In fact, you could define what I and everyone else at the London Book Fair was doing as “building our guanxi.” Here’s an explanation of this fundamental Chinese concept from Berkshire’s 156-page This Is China: The First 5,000 Years:

Any book or magazine article about “how to do business in China” today will tell the reader that the most important thing to understand is guanxi, a word that means relationship. In its common usage it seems very much like Western networking, and in practice it works much like the “old boys’ network.” Guanxi is based on common experiences or connections—being a classmate or a co-worker, coming from the same area, having mutual friends. As a tool for contact and communication, guanxi is important in everyday Chinese life, both for individuals and groups. (Guanxi can also be used to imply corruption—a bit like describing someone as “connected” if they have ties to the Mafia.)

Guanxi depends largely on the Chinese view of society as a hierarchically structured order covered by an interlaced network of relationships. To make use of guanxi, both sides have to be able to give each other something (such as influence, protection, access to scarce goods and services, or opportunities for promotion or profit). If a person has no connection to the influential person whose guanxi he or she needs, a link must be created by someone from the same guanxi network who can, through various channels, set up the connection. For example: A requires something from D, but there is no guanxi between them. In A’s relationship network, there is B, who is connected with C. And C has guanxi with D. A therefore asks B to get in touch with C. B helps A and turns to C; C wants to help B and speaks with D. D wants to do C a favor and therefore helps A. Through this sort of chain, new guanxi connections develop and with them new mutual obligations. In this way, guanxi fulfills the function of a social investment. It can be seen as a relationship among people or institutions based on exchange, and with the mutual understanding of the rights and obligations of all parties.

I also hoped to get a better picture of how the UK-China relationship differs from the United States-China relationship, as Berkshire is increasingly working with scholars and organizations in the UK. It seems that the British are less worried about China than Americans are, and less bothered about the issues that Americans on both left and right can be hyper-sensitive about. Perhaps their sense of time is more like that of the Chinese: they see relationships as evolving over centuries.

UK publishing deals are being made, on a small scale, and President Xi’s visit of last October is fresh in everyone’s minds. The governing Conservative Party is eager for Chinese investment – not having the fervent anti-Communist perspective of conservative Americans – while the Labor Party, said an informed colleague, barely has a China policy.

Among the hors d’oeuvres passed round at a British publisher’s reception were saucers of piping hot fish and chips, and on the drinks table was a punch bowl mounded with cold bottles of Greene King IPA. “This is what David Cameron offered to Xi Jinping,” I was told. “This is Xi’s favorite English beer?” I asked as I looked at the label. “No,” my companion said with Chinese frankness, “It’s the beer that David Cameron likes.” I guess President Xi prefers a nice Tsingtao.

We’ve been chuckling over Obama’s jokes at the Correspondents Dinner, one of which was about his visit to the UK a couple weeks ago. He talked about what a slap in the face it’d been when Prince George turned up to a meeting in his bathrobe. I wonder when it’ll be possible for us, Americans and Chinese, to joke like that about our nations’  relationship? Clips were broadcast on Chinese television, and I’d love to know what viewers thought of the jokes, and whether they’d get the reference to Game of Thrones (I didn’t). In any case, I urge you to watch the US comedian in chief! 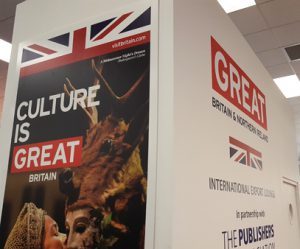 The British have some great designers, writers, artists, and musicians, and London is a cultural capitol, but I can’t say much for their advertising.

A few years ago the tagline on billboards and posters was LondON This and LondON That, with the ‘ON’ in red or another emphatic color. What the heck did that mean? London’s ON rather than OFF?

This year they have a new ad campaign for Great Britain that plays, quite horribly, on the word Great. I photographed a sign for your enjoyment: CULTURE IS GREAT Britain.” Ugh. There were plenty of these posters at the London Book Fair and they are plastered all over the airports. I’m American and every time I saw one I could hear Tony the Tiger saying, “It’s GREEEAATTT!!!”

Great Britain does not include Northern Ireland, and I guess that’s why we also see ads for Northern Ireland. Or perhaps it’s because I met representatives from the Northern Ireland Tourist Board in China last year, at the World Cookbook Awards. They’re vigorously promoting the cuisine of Northern Ireland, a subject that it’s probably best that our comedian in chief didn’t make a joke about. But over time they may pull it off, as my little corner of New England has done. “Local” cuisine now has nothing whatever to do with anything that was eaten here before 1990.

If anyone from our lovely town of Great Barrington reads this, please do not for a second get the idea that we should copy this theme. LOCAL FOOD IS GREAT Barrington would be even worse.