Home>Let the Games Begin!
Previous Next 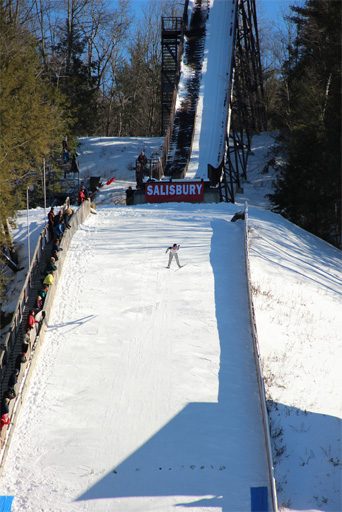 A young ski jumper at the annual Salisbury, Connecticut Ski Jumps, February 2013. The record jump for the day was 71 meters. Photo by Ryan Siever.

While many in the Western world view Russia as a bewildering place of vodka and extreme cold, those who know better know the host country as a place with a deep cultural appreciation of the arts; a place where people spend all day on New Year’s Eve perfecting dishes such as “shuba”—the delicious (and bright purple) layered beet, egg, potato, and herring salad that is translated in English as “herring under fur coat salad”—to be shared with loved ones.

And while most of Russia is indeed cold, Sochi is not. The selection of Sochi for the 2014 Winter Olympics was controversial for several reasons. It is one of Russia’s southernmost cities—it is an extremely popular summer getaway, where mountains meet the sea—and thus was a strange choice for hosting winter events. As a result, the city has undergone extensive renovations to accommodate the events. As The Guardian newspaper put it, “The race to turn the beach resort of Sochi into a Winter Olympic host venue has been described by critics of the Kremlin as one of the most corrupt projects in Russia’s history.”

Here’s some sports-related trivia gleaned from the Berkshire Encyclopedia of World Sport to wow your friends and colleagues:

The third edition of this groundbreaking work brings the study of sports into the 21st century by integrating Berkshire’s past work on women’s sports and extreme sports into a complete sporting library. The encyclopedia features over 300 new and updated articles on:

Click here for a list of events at the Winter Olympics. Update: there will indeed be women’s ski jump for the first time this year!