Churches are difficult buildings to interpret. A lot of studies I’ve read tend to treat them as unique, almost sui generis structures that can’t be judged by the aesthetic criterion used for other kinds of buildings. At the heart of this is the challenge of marrying their function and their physical layout – we know broadly what things happen in a factory, or a house, or a museum, or a shop. But in a secular age, for most simply working out what activities happen in a church, and how they are linked to the design of the building is not straightforward. All of this is compounded by the great age of some of the religious buildings left in the U.K., and the significant changes in religious practice over the last few centuries which mean they have often been extended, renovated and rebuilt not once or twice, but several times to accommodate and reflect these. 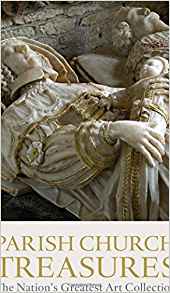 John Goodall’s Parish Church Treasures: The Nation’s Greatest Art Collection (Bloomsbury, 2015) looks on the surface like it might be yet another coffee table book with very lovely photos milking the seemingly infinite heritage market in the U.K. Happily, the way in which Goodall divides up the selection into nine broad eras and the quality of the concise explanations he gives to each period and what distinguishes it makes this book practical and helpful. In essence, it supplies, in remarkably short space, a narrative of ecclesiastical building development over the last millennium, with plentiful examples and with historic and political context. Using this book, it is now much easier to go into any church and start looking at it through its functionality, as a kind of meeting place, which, depending on its age, underwent extensions and adaptations – cathedrals on this model were (and are) just very large conference venues. But also as a performance venue, a social centre, and an exhibition space. While respecting the sacredness of churches, this approach at least makes them less esoteric and forbidding.

It is clear that he doesn’t subscribe to the largely negative response by others to heavy Victorian renovation – his chapter on the Victorian period is the longest and perhaps the most appreciative in the whole book. He does a good job too of explaining the impact of the reformation in the mid-sixteenth century, and the way in which iconoclasts were let loose in religious buildings to rid them of much of their furnishings and decorations which means, to this day, that the structure of many older churches and their interiors literally belong to two ages. The final part on the twentieth century is good, too, though the omission of Tudeley’s All Saints’ Church in Kent with its astonishing collection of Chagall stained glass is a pity. So too is the very small sample from the pre-Conquest period – though he does explain this by saying that the Conquest itself was probably the single event in British history that had the most negative impact on indigenous architecture, largely by wiping out a whole style and era of work.