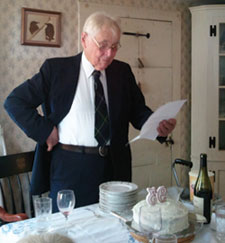 I write today to share the sad news that William H. (Bill) McNeill died on Friday, 8 July 2016. He was 98 years old, and rooting for Roger Federer at Wimbledon right until the end.

Bill and I worked together for many years, and he was the senior editor of Berkshire’s major publication, the Berkshire Encyclopedia of World History. He was friend and mentor and inspiration to me, and to my children, who spent many evenings listening to our conversation and eventually joining in themselves. Tom, who lives in China, has been home on vacation and had a chance to talk to Bill for the last time last Saturday, and to say good-bye. Bill used to quiz Rachel about wolves and aspen trees, and about her exploration of his woods in Colebrook, and only last week he wanted to know how many words there were in her draft novel.

Writing was one of the things Bill lived for, and he continued to write for decades after his retirement. Much of that writing was for Berkshire Publishing, and he published several other books, including an autobiography called The Pursuit of Truth. In that book he details his experiences on the 1992 Christopher Columbus Quincentenary Jubilee Commission. Bill was no proponent of European superiority, and his knowledge of the importance of disease, the subject of one of his most famous books, Plagues and Peoples, came to the fore as he tried to explain the biological dimensions of the Columbian encounter. It was a frustrating experience as Bill had been pigeon-holed by the radical environmentalists as a promoter of Western civilization, while in fact, he was largely responsible for what he later called, in a speech and article, “Leaving Western Civ Behind.” His focus on the ecological dimension of world history began very early and came through in everything we did together.

Our paths had crossed obliquely when he was on the Columbus Commission, but we didn’t meet till 1996, when I was urged by Robert Ferrell of Indiana University to contact Bill about a world history project. “He lives near you,” Ferrell wrote. And indeed he did. That physical proximity and our shared interest in the workings of human community brought us close. We talked about community as a concept but also exchanged stories about our efforts to create community in real life, and I agreed with him when he wrote that “finding a new accommodation between rural and urban segments of society constitutes the most fundamental human agendum of the twenty-first century.” 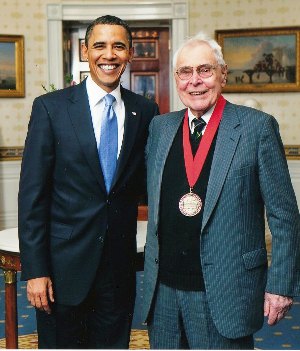 I was also taken with Bill’s thinking about the human dilemma in the 21st century. No matter what the issue – and he was particularly alert to environmental threats, and to the dangers of ethnic and national conflict – he could provide examples drawn from other times and places. We were chatting one evening about party political conventions, for example, and I asked if he paid much attention to them. “I haven’t listened to one,” he said, “since 1932.” He proceeded to tell us about that Democratic Party Convention at which Franklin Delano Roosevelt was eventually made the candidate and thus became president of the United States. One of the highlights of Bill’s last years was a trip to the White House, where President Obama awarded him the National Humanities Medal. 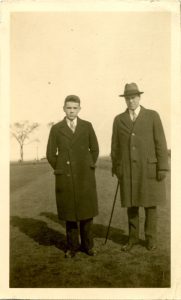 Bill’s fascination with military drill and dance – the way shared movement creates emotional bonds – was something we talked many times. Not long ago, Rachel and I turned up for a visit when Bill was about to go to a concert at the nursing home, so we went along. Bill was almost deaf (I managed by perching on the arm of his chair and shouting into his ear) but he said he could feel the music, and we watched the audience of elderly people who had arrived on canes and in wheelchairs tapping their feet and clapping their hands. Bill told me that one thing he wished he had done is write more about music in Moving Together in Time.

Bill coauthored The Human Web with his son J. R. McNeill in 2003, and wrote for the New York Review of Books until 2008. When we came to do a second edition of the Berkshire Encyclopedia of World History in 2010, Bill took a greater role, writing new essays and helping to refine our coverage in a variety of areas. I particularly remember his assessment of our articles on warfare and technology in different parts of the world, and his wonderful essays on salt (listen to a reading of “Salt” by clicking here) and the global influence of ancient Greece.

In 1996, about the time we first met, Bill began corresponding with a professor in Australia, David Christian, who was in early stages of writing about something he called “big history.” Many people of eighty would have rejected such an ambitious new way of looking at history, but Bill welcomed it, urged me to learn about it, and helped and encouraged David Christian in every way he could. I’m thrilled that we will soon publish an edited collection of their letters, and we have just uploaded a podcast with David Christian in which he and I talk about our first meeting at the McNeill house in 2002.

In retirement, Bill also began a series of personal writing projects, starting with a lovely memoir of his grandparents that Berkshire produced in a limited edition. In 2012, he wrote a collection of biographies of “friends and acquaintances,” starting with me. That was a terrifying experience. Bill always wanted the truth and had no inhibitions about asking about details of my personal life that I would not have otherwise chosen to discuss with an eminent professor forty years older than I.

I’ve written before about our weekly suppers, about my fears about losing him, and about the birthday parties that became an annual event (links below to a few of those stories). Bill baked the birthday cakes until I finally managed to take over that task in 2012. My cakes looked and tasted better, but I now think nostalgically of the funny, lumpy cakes he would make from boxed cake mix.

On Wednesday, 6 July, just two days before he died, Bill was dozing with the tennis playing on the television when I walked in. He asked if I had come alone, and what Tom and Rachel were doing. I had brought the bar of dark chocolate he’d asked for on Saturday. He looked at it skeptically, but I ate a piece and then he ate one. I gave him several more, slowly, as we talked, cautious because I once brought him a chocolate Easter bunny and he ate the whole thing at one go.

He wanted to know what was happening with Federer and Cilic (he had the name right – I didn’t even recognize it) so I looked up Wimbledon news on my phone and read the details of Federer’s victory that afternoon. Bill told me about playing tennis with his sons and how they had grown up and eventually beat him (”It was not difficult,” he said). He told me about trying to get on the U High team in Chicago. He said his father had been a good player and that he and another man once lost track of the score, giving Bill the chance, as a little boy who’d been watching through the fence, to set them right.

My plan was to visit again on Friday to watch the semi-final with him before going on to a family wedding in the Hudson Valley. I made a batch of shortbread, prepared strawberries and cream, and packed the makings for a Pimm’s Cup – I was going to give Bill the real Wimbledon experience.

It didn’t happen that way. Instead, we went to say good-bye, to whisper things I am certain he knew: how much we loved and admired him, how much we had learned from him, and how determined we are, in whatever way we can, to carry on the work he began – to show people, as he once said, that the world really is round.

Two of my letters about Bill:

It’s a sad time – his presence in my life was something I had come to depend on – and I know he influenced many people all over the world. I’ve already heard from many people who knew Bill, with their memories and appreciation. I heard, for example, from Martin Marty, one of the remarkable people I’ve come to know through Bill. Please feel free to add your thoughts using the Comment form. Your tributes here will mean a lot to his family as well as to me.