Chinese food, anyone? I’ll be co-presenting a program about gastrodiplomacy at Schwarzman College in Beijing next month, and I am looking for stories to share, from history as well as personal experience. 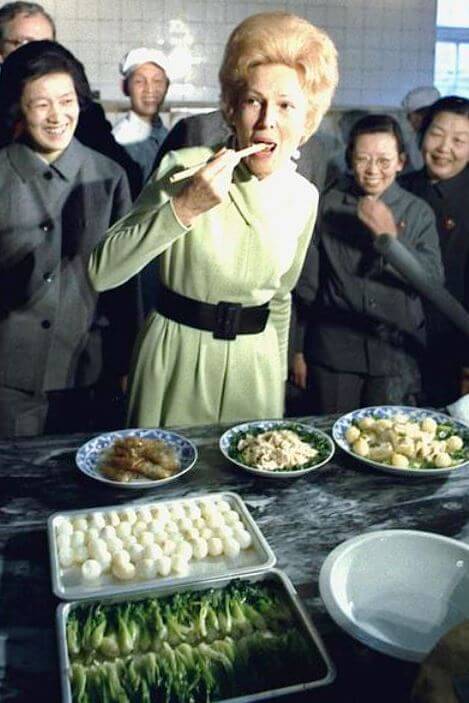 Schwarzman College 苏世民书院 is a residential college at Tsinghua University. Schwarzman scholarships are modeled on the Rhodes Scholarships at Oxford. The one-year MA program, which began in 2016, is intended to give future global leaders a deep understanding of China and its role in global affairs.

Food is definitely a softer aspect of global affairs, but dining together is important in international relations and remarkably powerful, especially when it comes to China. 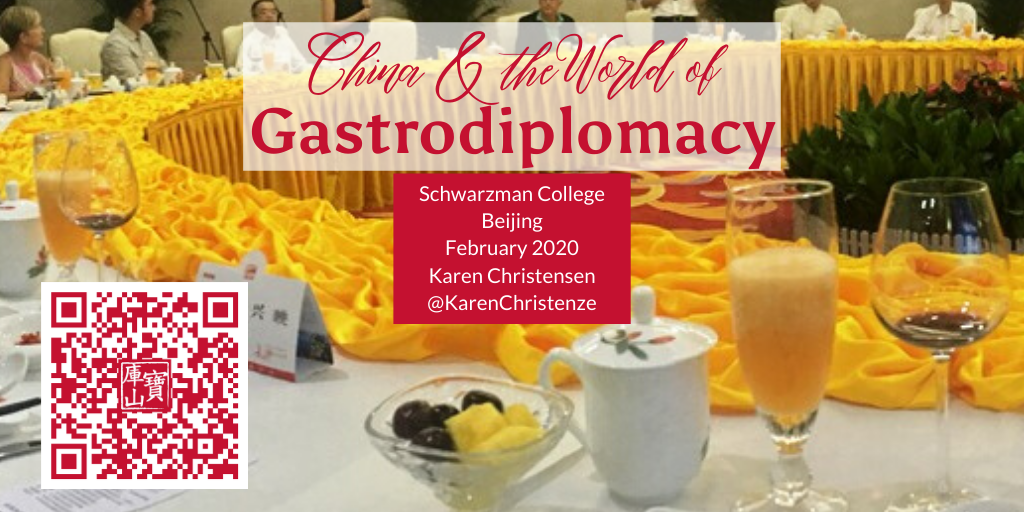 My co-speaker and facilitator in Beijing will be Johanna Mendelson Forman. An expert on “conflict cuisine,” Johanna will explain how food is used for nation-branding and the role food can play in peace-making. Berkshire’s work on Chinese cuisines aligns perfectly with the concepts and practices of gastrodiplomacy, and is a way for us to connect our food publishing with our publishing on leadership, community, and sustainability. (Berkshire has projects on gastrodiplomacy and on food and sustainability in development.)

Gastrodiplomacy is not a new concept, just a new name. The simplest expression in English is “breaking bread,” a metaphor for peace-making from the days before gluten-free and paleo diets. We all know that eating and drinking together can smooth the rough edges of relationships, and this applies in international diplomacy as well as local politics. 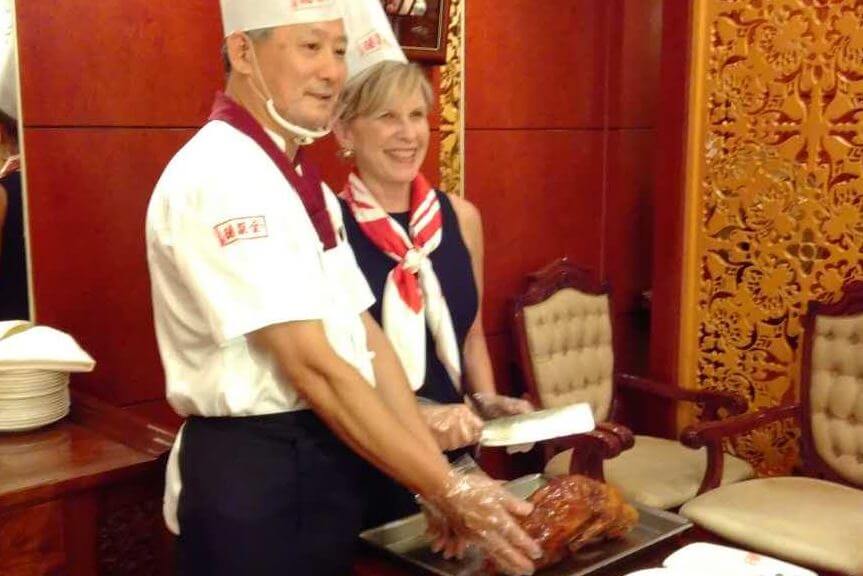 But eating together isn’t always a straightforward proposition. In February 2017, for example, presidents Xi Jinping and Donald Trump were eating together in Florida when a US-ordered missile strike hit Syria. In advance of the meeting, the US president had promised to serve nothing but Big Macs, because of the US trade deficit, but instead they ate New York strip steak, with catsup on the side for President Trump. He told reporters that they had been enjoying the “most beautiful chocolate cake” during the missile launch.

Was it offensive for the host to announce how good the food was? Should Chinese guests have been served a meal less ostentatiously American, less obviously the favorite food of the host? And what was the significance of launching missiles during dinner?

Gastrodiplomacy plays out in business, too. Jerome A. Cohen, who has worked in China for decades, tells me how important it is to invite Chinese negotiators to dinner the night before meetings begin, or at least to lunch the first day.

In 2006, the Beijing Book Fair was both business and something of an affair of state. We were told to leave early one day so the conference center could be made ready for Chinese and Russian delegations to view it in the evening. Next, all foreign exhibitors were invited to dinner at the Great Hall of the People in Tiananmen Square. We were escorted up great carpeted staircases into a huge banqueting hall.

There must have been 1,000 guests, with staff circulating continually with new dishes. They brought out soup tureens for each table, filled with a seafood soup, or stew, dense with large pieces of all kinds of oceanic delicacies. It was delicious, clearly luxurious and expensive. Our best guess today is that it was a dish called 佛跳墙, ‘Buddha jumps the wall’ or, says a friend, “God needs VPN.”

It was amazing to see the quality of the catering, but, I said to myself, this may be a small crowd at the Great Hall of the People. You’ll see in the photograph (below) that there were also plates of both rye and white bread and packets of New Zealand butter, and knives and forks – that too is diplomacy.

The next morning I saw some men who’d been at my table. “Wasn’t the food amazing!” I said. Their jaws dropped and one said incredulously, “You mean you ate it?” 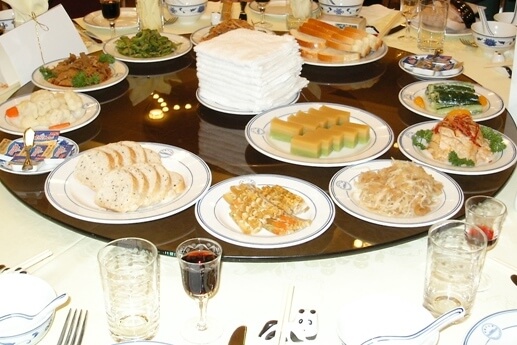 My deeper experience began in 2009 when my son went to live in Beijing. He didn’t have a lot of money and lived in an apartment in a hutong, a traditional residential alleyway. Before long I was sitting in hole-in-the-wall noodle shops and back-alley restaurants surrounded by men in their undershirts, eating delicious food.

Since then, I have eaten with Chinese people at grand banquets and in small family restaurants all across China. I’ve had a table full of people watching intently as I picked up something very small or slippery with chopsticks. I’ve drunk many toasts (though as a woman I have managed to avoid overdoing it with Maotai).

In the United States, I’ve given dinner parties for Chinese friends, served them their first hotdogs, their first deviled egg, their first rhubarb crumble. In the process of explaining rhubarb to them, I learned that it was one of the Qing dynasty’s top exports. I was once put in charge of ordering wine at the Four Seasons for a group of visiting Chinese who spoke no English and had no idea what type of wine they preferred.

Today, I deal with chefs, culinary associations, and Chinese business people who want to bring their products to the world. Misunderstandings in language and customs abound. But there are huge opportunities once these miscommunications are cleared up, in terms of diplomacy, commerce, and cooperation on such issues as climate change and public health.

A Spanish missionary recorded in 1575, after a banquet, “that the Chinese were not great meat-eaters, their food consisting principally of fish, eggs, vegetables, broths and fruits.” Food and sustainability is a subject Berkshire Publishing plans to do much more on, and the traditional Chinese diet is going to be part of that study.

Thursday, 30 January 2020, Simon’s Rock College Lecture Center, Great Barrington, 7.00-8.30pm. Before going to Schwarzman College in Beijing, I’ll be sharing the stage with one of China’s leading food studies scholars, Zhao Rongguang, here at home. This event is hosted by the Center for Food Studies at Simon’s Rock. For more information, click here.

And for something completely different, here’s another strand in my working life. 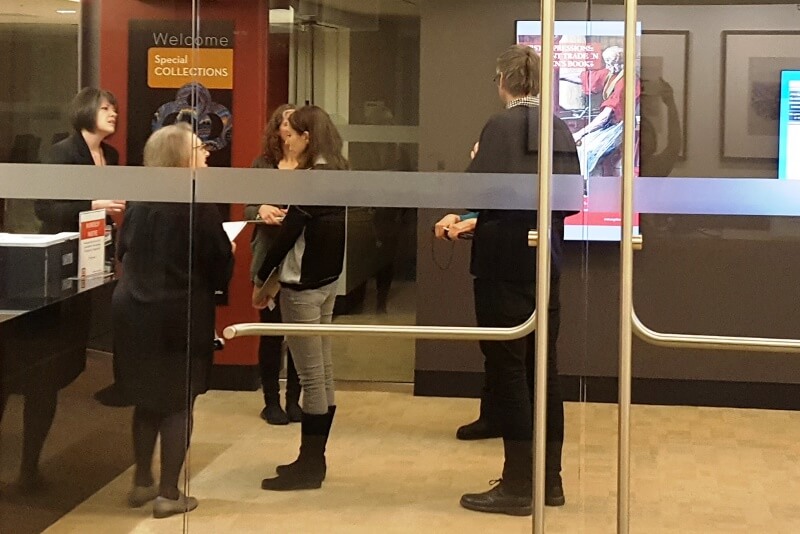 A collection of over a thousand letters written by the poet T S Eliot to Emily Hale, his secret companion and muse for many years, was opened on 2 January after being sealed for over 50 years inside wooden boxes wrapped in steel bands. This turns out to be a literary sensation.

I was there, at Princeton, on opening day, expecting a crowd, but there were only 7 or 8 of us, including journalists from The Times, Guardian, and Daily Mail. Biographer Lyndall Gordon has written several books about T. S. Eliot and is now contracted to write about the women in his life. Frances Dickey, an English professor, is blogging about the letters here. Sara Fitzgerald, a journalist and author, had just published a novel about Eliot and Hale, The Poet’s Girl, and was about to see how accurate her surmises about the relationship were.

During the course of the morning, Harvard released a counter-narrative written, at least primarily, by Eliot some years after the letters were given to Princeton. His letter, which I am certain was written at the instigation of Valerie Eliot, turned a literary event into, as Sara Fitzgerald put it, a soap opera. I recorded an interview with her for Berkshire Bookworld and you can listen to the podcast by clicking here. (You can follow this story and my work on women connected with powerful men at my personal website, KarenChristensen.org.)

Here’s an AI app that I’m finding very useful indeed. It will transcribe audio files or translate your spoken words into text as you speak. I used it to create the transcription of my interview with Sara Fitzgerald, for example. It’s very simple to use and remarkably accurate, and it’s fun to watch one’s word scrolling out, and to see the software correct itself, too. Thanks to publishing consultant Jane Friedman for this recommendation. (By the way, when someone asks for advice on getting published, or ib self-publishing, I always refer them to JaneFriedman.com.)

There are wonderful new Chinese cookbooks, replete with photographs, but here are a couple of older books I love, and use often.

Of newer cookbooks, my favorite is Every Grain of Rice by Fuchsia Dunlop; I turn to it often. And for a great introduction to the philosophy of food in China, how about a novel? Nicole Mones’s The Last Chinese Chef is both entertaining and thought-provoking. And it’ll make you very hungry.

I know that many of my colleagues and friends have stories about eating in China. I’d love to hear your stories and get your advice. Please feel free to email me, and we are also setting up a way for people to share their stories of gastrodiplomacy on our website.