Environmental issues have been central here at Berkshire Publishing since we opened shop in 2004. Even before that, we had produced the three-volume Encyclopedia of World Environmental History for Routledge in New York.

I remember the first editorial meeting, at the National Humanities Center in North Carolina. One thing I learned was that it couldn’t be an “international” encyclopedia because its coverage went back far before there were nations. World environmental history was the chosen and correct title.

Then we began the 10-volume Berkshire Encyclopedia of Sustainability, a vast project that I somehow thought encompassed everything we know about environmental sustainability. I have often told people that the ten volumes “cover everything.”

But I was wrong. The earlier encyclopedia has a huge amount of material that isn’t touched on in the later publication, including such unique items as an article on the Gaia Theory by James Lovelock, the elusive scientist whose friend William Golding, author of Lord of the Flies, came up with that name in 1969 for Lovelock’s radical concept that “Earth itself regulates the composition of the atmosphere to keep the planet habitable.” Read about Golding and Lovelock.

The Encyclopedia of World Environmental History includes material on the arts, on nature writing, and people who have through the ages influenced our thinking about human beings and the natural world. One of these biographies is something I asked J. R. McNeill to write after hearing him refer to an American chemist as having “more impact on the atmosphere than any other single organism.”

I’ve included McNeill’s biography of Thomas Midgeley below, and links to several free articles to give you a sense of what we now plan to merge into the Encyclopedia of Sustainability in its new online edition.

There’s still time to preorder the print set at an amazing discount.

Thomas Midgley was a brilliant industrial chemist and had more impact on the atmosphere than any other single organism in the history of life on earth.

Midgley was born 18 May 1889 in Beaver Falls, Pennsylvania. He studied engineering at Cornell University and learned chemistry on his own. In 1916 he joined the laboratory of Charles Kettering in Dayton, Ohio, sponsored by the General Motors Research Corporation, where he sought additives for gasoline that would reduce ‘knocking’ and thereby allow higher-compression engines. In late 1921 he found that lead did the job admirably. Soon tetraethyl lead became a standard gasoline additive, first in the United States and eventually around the world.

A public health controversy arose in 1924, and lead gasoline was briefly withdrawn from the U.S. market. But by 1926 authorities found the risk acceptable. Thereafter, millions of tons of lead entered the atmosphere with vehicle exhausts, some of which found its way into plant and animal tissues, and into human bodies, where, in sufficient doses, it caused disorders in nervous systems and brains, especially those of children. Ambient lead derived from several sources, but mainly from vehicle exhausts. Most countries phased out leaded gasoline gradually in the late twentieth century, and ambient lead concentrations dropped dramatically, as did the lead levels in human bloodstreams.

In the late 1920s Midgley took up research on refrigerants. At that time, chemical refrigeration involved dangerous gases, such as ammonia. Midgley in 1930<N>31 developed the first of the chlorofluorocarbons, Freon (dichlorofluoromethane), an inert gas that made safe refrigeration feasible and air-conditioning practical. Chlorofluorcarbons (CFCs) also proved useful in solvents, spray propellants, and insulation.

CFC production remained small until after World War II, but by 1970 some 750,000 tons of CFCs entered the atmosphere annually. They drifted up to the stratosphere intact (because as inert gases they react with very few chemicals), where ultraviolet radiation broke up CFC molecules, releasing agents that in turn ruptured ozone molecules. Stratospheric ozone has for roughly a billion years formed a shield that minimizes the amount of ultraviolet-B radiation reaching the earth’s surface, making life as it has evolved possible. Enhanced UV-B radiation endangered phytoplankton (the basis of the oceans’ food web), human immune systems, and raised skin cancer rates. By the year 2000, perhaps two million excess cases of skin cancers were attributable to the thinning of the ozone shield.

In the 1970s scientists suggested that CFCs might erode the ozone layer, and in the 1980s careful measurements showed this had indeed happened. International agreements followed quickly, limiting further CFC production. But, as inert gases, CFCs linger in the atmosphere for about a century, so that some of those released in the twentieth century will still be rupturing ozone molecules late in the twenty-first century.

Midgley won most of the prizes an industrial chemist can win in the U.S. and became president of the American Chemical Society. He died in 1944, strangled by the ropes of a rope-and-pulley system he had invented to help him in and out of bed after he contracted polio.

“Everyone who is ready to get serious will profit from this robust, comprehensive, diverse collection of cutting edge thinking from some of the smartest members of our species.” —Denis Hayes, principal organizer of the first Earth Day

Order now & get free digital access to the first edition at eBooks.com until your print set is shipped. The first edition is also available from Oxford Reference and from Cengage GVRL.

You’re entitled to free digital access until publication of the new print encyclopedia. Just drop a line to Kara Lozier at cservice@berkshirepublishing.com. And we’ll be glad to send you a free book, too, as mentioned above. 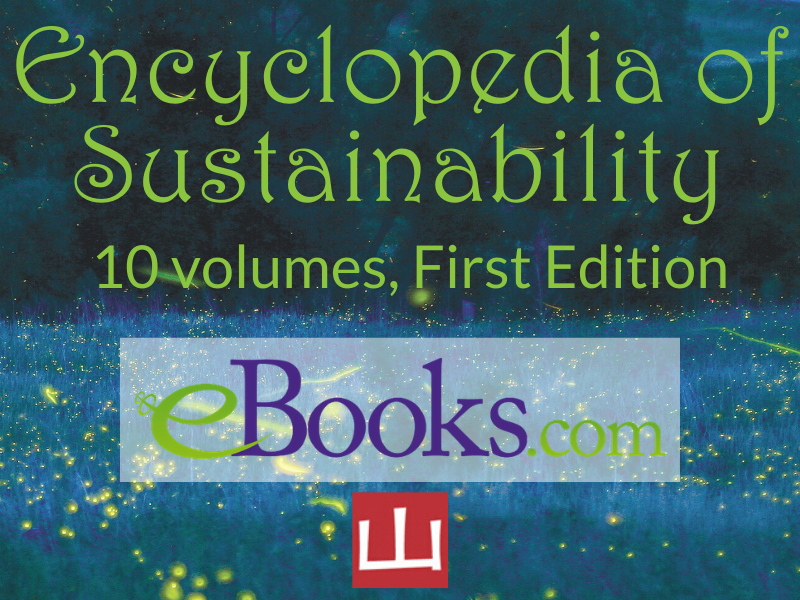 Along with free digital access until your set ships, you’ll receive a free copy now of any of the books below – just alert us to your title choice when you place your order (and we’ll check about this when we set up digital access).

“This is undoubtedly the most important and readable reference on sustainability of our time.” —Jim MacNeill, Secretary-General of the Brundtland Commission and chief architect and lead author of Our Common Future