I’m looking forward to digging into our next project – This Is America: A short history of the United States. The subtitle is tentative, and we welcome suggestions from people — but we want to stick with the “America” part in order to generate discussion on the fact that the US is a small part of the Americas. (Incidentally, during our travels in Britain, we’ve found that people invariably ask if we’re from America, or, just as commonly — I suppose because we try to be polite — Canada. But never the United States.)

We see this new book as being very useful with Chinese and other foreign students who need a survey of US history and how it affects the world today, and the America they are experiencing in their day-to-day lives, at college or in high school exchange programs. This will not be a Lonely Planet guide so much as a quick tour of US history as it is relevant to understanding America in the world in the 21st century. I think it’ll be a great book, and one that will be illuminating to work on.

The idea of the United States has been on my mind a lot lately, having recently returned from a relaxing (and cheap! only $61 one way) 7-hour train journey to beautiful Charlottesville, Virginia, for my Texan cousin Lauren’s wedding. While we were there we got to visit Monticello, Thomas Jefferson’s hilltop home and gardens. We learned, among other things, that Jefferson was an extremely enthusiastic wine drinker — he even installed a dumb waiter, just for wine from the cellar below, on either side of his fireplace so that discussions with visiting diplomats could be candid and uninterrupted — and that he introduced macaroni and cheese to the newly formed United States. I hope to work these kinds of interesting details into the book, since everyone can relate to food, and it helps to bring history alive.

We also learned that, much like the country he helped to form, Jefferson was a conflicted and often contradictory person. He was the “Founding Father” responsible for introducing the concept of freedom of religion to the Constitution, but he was also a life-long slave owner. Jefferson understood well the horror of slavery but thought that, realistically, it would have to be up to future generations to end the institution of slavery. (I am currently reading a fascinating account of Jefferson’s trip to France as commerce secretary, titled Thomas Jefferson’s Creme Brulee: How a Founding Father and His Slave James Hemings Introduced French Cuisine to America, whose title says it all.) My family and I talked about this as we strolled around the gardens and thought that it was probably similar to someone trying to get an entire country off of oil, or industrial-scale agriculture: easier said than done.

Jefferson was also an avid gardener, so we very much enjoyed visiting the hillside gardens of Monticello – especially since the climate of Virginia was so much more advanced and spring-like than the cold spring we’ve been suffering through here at home in Massachusetts! 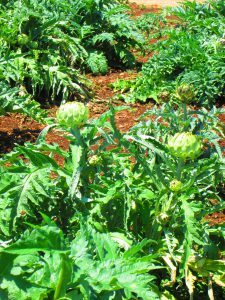 I’ve eaten many an artichoke but never seen one growing! Artichokes at Monticello, early June. 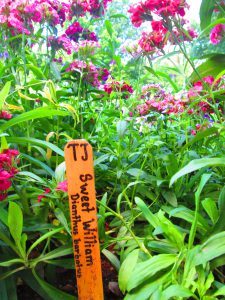 I am a big fan of the name of this flower.