Please join us at Bard College at Simon’s Rock on Alford Road in Great Barrington for a local, national, and global conversation on Monday, October 5th, starting at 5.30pm. This will be the first “CHINA Town Hall: Local Connections, National Reflections” in the Berkshires or Tri-state region. We’ll be joining 75 larger communities and university campuses that have, since 2007, hosted CHINA Town Hall, a public outreach initiative of the National Committee on U.S.-China Relations, an organization that is known for its role in “Ping Pong Diplomacy” in the 1970s. Today, its work ranges from environmental issues to human rights.

Last year, Jimmy Carter was the guest on the national CHINA Town Hall webcast, and this year there will be a panel that includes Robert Reich, secretary of the treasury under Bill Clinton. The national program focus is foreign direct investment and you can read about it here. In May, I heard one of the speakers, Mayor Sheldon Day, tell the story of how Chinese investment has created jobs and changed the economic outlook of his small town in Alabama, and I know you’ll thoroughly enjoy his presentation.

When President Obama and President Xi Jinping of China gave a joint press conference at the White House on September 25th, Mr. Obama pointed out that since he took office in 2008 American exports to China have doubled, supporting nearly one million US jobs, and that Chinese investment in the United States is creating jobs in America. [According to the New Neighbors report, which will be discussed at CHINA Town Hall, more than 80,000 Americans are now employed by Chinese companies, including 150 at a subway-train manufacturing plant in Springfield, MA.]

The two presidents emphasized that as the world’s two largest economics (China recently took second place, and Japan moved to third), we have a great responsibly to make the Paris climate negotiations in December a success. For the first time, they agreed to partner on global development—humanitarian assistant, disaster response, healthy security, and food security—with ending extreme poverty as a development goal.

People-to-people exchanges have always been important in the US-China relationship, from the days of “ping pong diplomacy” until today, when there are nearly 250,000 Chinese students in the United States. Two announcements were directly relevant to our region. President Xi and President Obama announced that the United States would encourage one million American students to learn Mandarin Chinese over the next five years and that 2016 would be US-China Tourism Year, designed to expand travel between our countries. 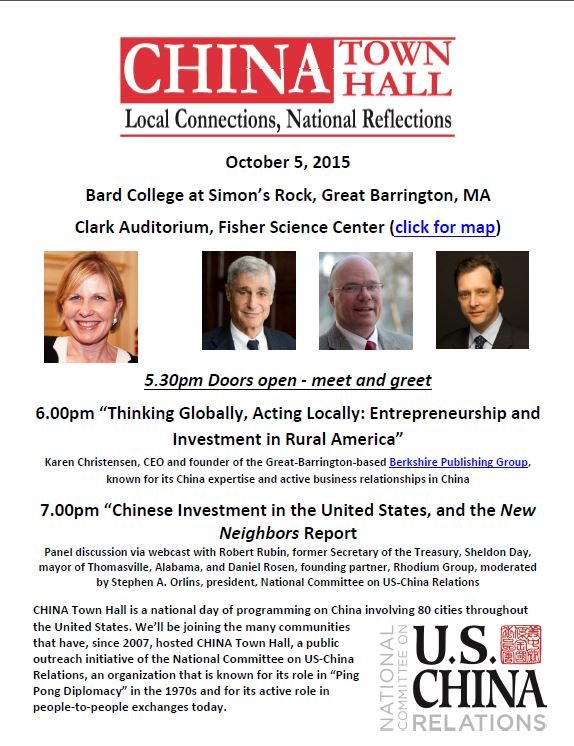 At every venue, there is also an on-site speaker, as well as the national speakers you’ll hear on the live webcast. For this first Great Barrington CHINA Town Hall, I’m taking that role, and will be talking about entrepreneurship and investment in rural America. Economic development is a major concern of mine and I look forward to connecting the big picture you’ll be hearing about to issues close to home, and close to our hearts.

The evening is Monday, October 5th, and the program will begin at 5.30pm with an informal reception with coffee and cookies. I’ll speak at 6.00pm, with time for discussion, and the national broadcast will start promptly at 7.00pm.

CHINA Town Hall is a national day of programming on China involving 80 cities throughout the United States. We’ll be joining the many communities that have, since 2007, hosted CHINA Town Hall, a public outreach initiative of the National Committee on US-China Relations, an organization that is known for its role in “Ping Pong Diplomacy” in the 1970s and for its active role in people-to-people exchanges today.