Home>Berkshire Blog, Seeing the World>A Lesson In Community From The Scottish Highlands
Previous Next 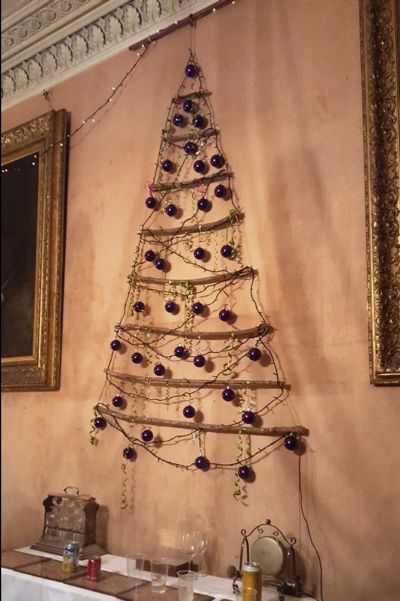 “Both hands!” cried John, the laird of the castle. I had missed again, and as I whirled on I breathlessly sympathized with him. How hard could it be, he must wonder, to get that second hand in place?

I tried again, hooking arms with the next man, spinning, spinning again, and – damn – my second hand still wasn’t where it was meant to be.

“Both hands!” “By the wrist!” “Left now!” John kept calling, with nary a frown, just quiet focus.

I had arrived in the Scottish Highlands two days earlier knowing that dancing at a castle was on the agenda for New Year’s Eve. What I had not grasped, until someone mentioned the “Reel of the 51st,” is that we would be dancing Scottish reels.

Scottish reels, whether named for a regiment or not, sounded extremely intimidating.

“Don’t worry,” my friend Isabel said, “as long as you have a sense of rhythm, you’ll be fine.”

Rhythm? I thought back to the humiliation of junior high dances and how all my adult life I’d avoided the dance floor. But it was too late to back out now. I went to my computer and found the Scottish Country Dancing Dictionary. 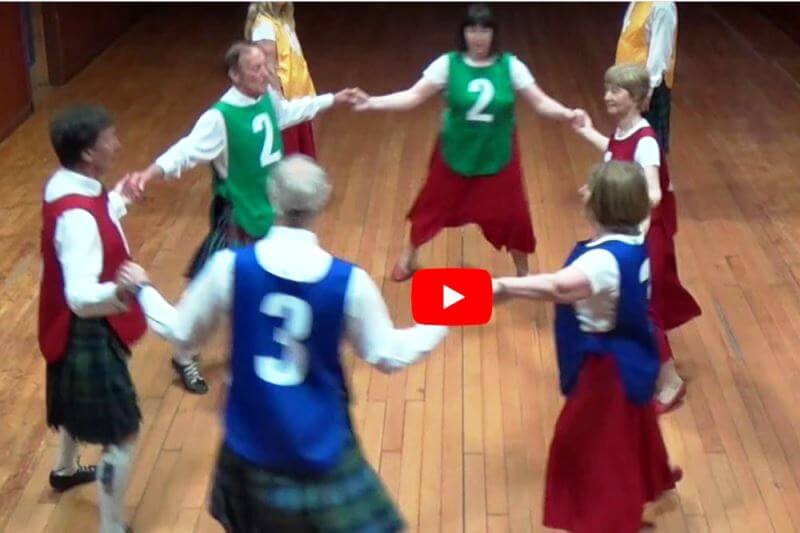 The Reel Of The 51st Division

There were videos with dancers in numbered pinafores, endless dance diagrams, and downloadable instruction sheets that looked like complicated knitting patterns. No wonder the highlands are famous for their sweaters.

The dances in the Scottish Country Dancing Dictionary number over five thousand. “Some are easy,” Isabel said. The Reel of the 51st was not. But when it was called just after midnight on New Year’s Eve, she was not going to let me sit it out. “Stay there! I’ll find you a partner.”

I stood by the open fire, smiling at the dozens of people I didn’t know, until she returned with John, the host of the party and the laird of the castle.

Poor John. After standing in the cold drizzle to get everyone parked, he would have what was probably a favorite dance spoiled by the visiting American.

The front doors were open wide on a frosty winter landscape and the now-clear starry night sky,. The lofty rooms inside were warm with people and lined with huge dark paintings of the family’s ancestors.

As promised, most of the men were wearing kilts, or trousers in their family tartan. I started to match patterns with clan names, and thus got a little information about who was related to whom.

Standing around a big central table spread with food, sipping champagne, talking to strangers and finding common ground –  it could have been a New Year’s party in London, or New York. But even though people had come from a wide area, there was a neighborhood feeling about this party. I don’t know if that comes from the Scottish sense of kinship, or Scottish hospitality (almost a law of the land, it seemed), or the importance of Hogmanay (New Year) as a midwinter celebration in that northern latitude. Strangers were welcomed, and while  some people stood by the open wood fires in other rooms, champagne in hand, the ballroom where we danced was the center of action for people ranging from ten to eighty. 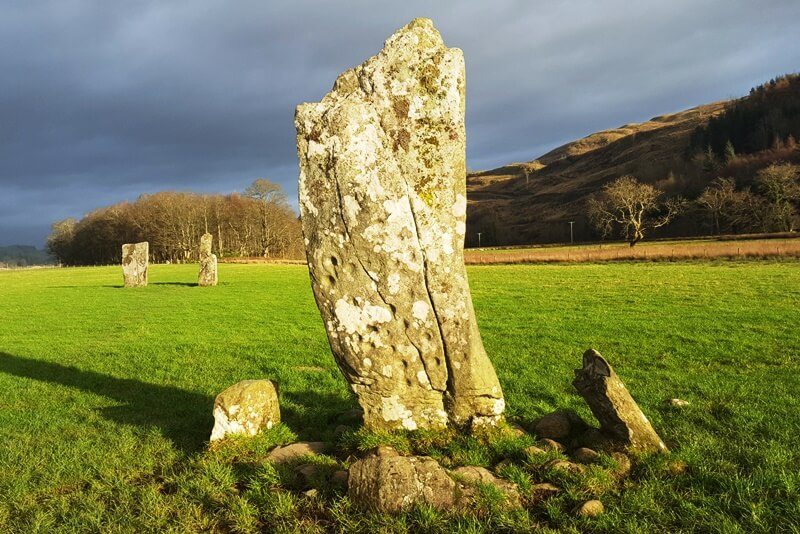 I had heard about the perfidy of the Campbells (or was it the McTavishes?), the history of the big house and the Malcolm estates, the restoration of the peat bogs, and the ancient tribes who had crowned Scotland’s first king on a hill not far away. The sense of kinship, and of a proud and violent history, was clear. “It’s Afghanistan with rain,” said Isabel.

Rain and dancing. Perhaps dancing is the antidote to clan warfare, the way to bring people together. Or could it have been part of battle preparation, as William H. (Bill) McNeill so eloquently posited?

Bill, the world historian who was so much part of the work of Berkshire Publishing, used to talk about the McNeill clan. I was once checking on something in his closet and noticed that several of his flannel shirts were in the same dark blue and green plaid, and that his blanket was the same plaid. The McNeill tartan, he explained.

He died in 2016 but came vividly to mind when I was Scotland. I mentioned to someone at the party that a dear friend had been a McNeill from the island of Barra. Ah, said my companion, and told a story about the laird of Barra, the head of the Clan McNeill.  After a grand meal, the McNeill chieftain would send out his trumpeter to blow to the east, the west, the north, and the south, and cry, “The laird of Barra has dined. Now all ye kings and emperors and potentates of the world may dine as well.”

It was easy to see that Bill McNeill descended from that proud clansman. 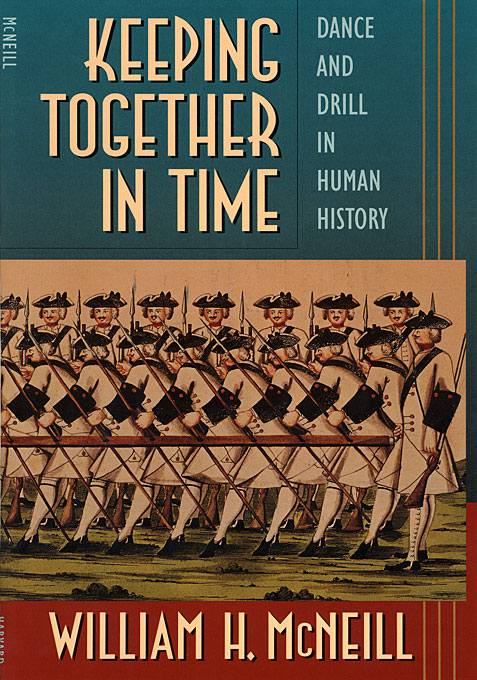 Oddly, there is no mention of Scottish dancing in Bill’s most original book, Keeping Together in Time (Harvard University Press 1997), or in his other writings about dance and drill. I knew that he would be delighted to think that I was learning the Reel of the 51st.

Bill and I shared an interest in human community building. We often talked about what he called “muscular bonding,” but I’d known him for ten years before I discovered that he had actually organized community dances in the tiny village of Colebrook, Connecticut. After he died in 2016, when his son John asked what I would like from the house. I asked for the dance posters that were pinned to the wall over the basement stairs. You’ll see one of them below.

It impressed me that a scholar like Bill had had same impulse I have: to test our theoretical, academic understanding out there in the real world, and to have some fun doing it. 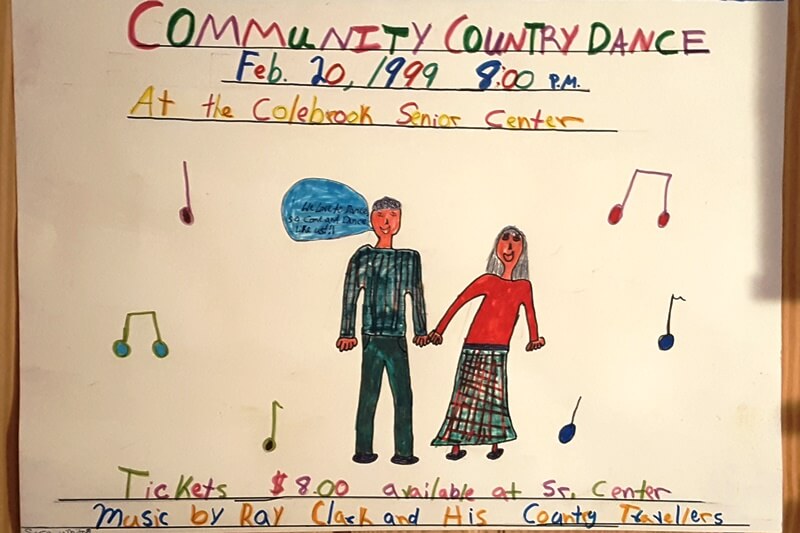 The chapter on small communities in Keeping Together in Time opens with this:

The archetypal form of dance among humans occurs on festival occasions, when almost everyone in the community joins in and keeps going for hours on end. Such events are almost universal among small, independent communities. . . .  The effect on participants is what we have learned to expect . . . making all concerned feel good about themselves and those around them. Shared emotion of this vaguely euphoric tone, in turn, binds the community more firmly together and makes cooperative efforts of every kind easier to carry through.

The way “muscular bonding” leads to good feelings and effective cooperation is the key point in Bill’s book, where he also explains how military drill transformed the way soldiers cooperated on the battlefield. 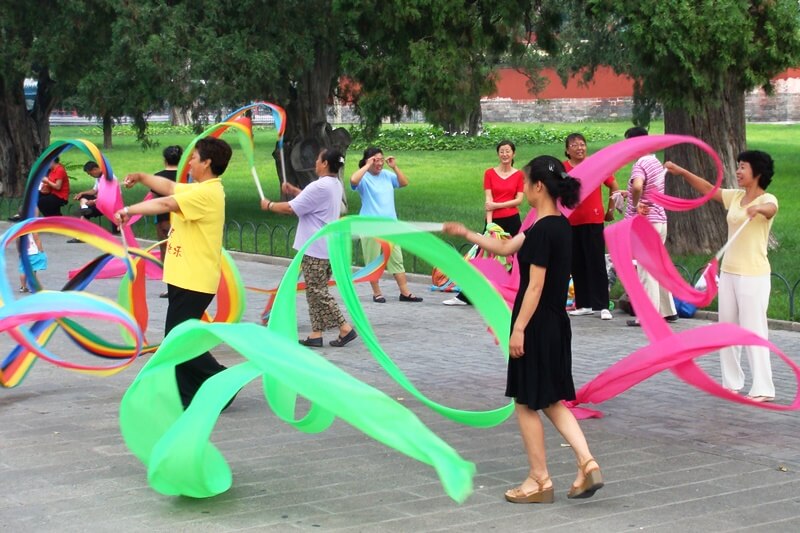 There are myriad examples of this, past and present. Religious groups often dance, or keep together in time by swaying or waving their arms. In China, “dancing grandmas” have been in the news, sometimes in dispute with urban neighbors, and dance is also important in villages trying to maintain a sense of community.

I had always seen dancing as painful and awkward, something to be avoided. But I found out that Bill was right. It brings people together. The better each person dances, the better the whole group does. And even when there are mistakes (yes, you know who), the laughter is infectious.

Something to keep in mind , by the way, is that on New Year’s Eve there were no smartphones, no photos or videos being taken. It was the first time in years I’ve been at an event and half the people weren’t watching a screen. Surely that added to the warm camaraderie?

When I got home from Scotland I actually found myself looking up Scottish dance clubs in New York. But there’s something much more obvious to try: contra dancing. I’ve heard about this for years and seen signboards placed on the sidewalk in the little village of Sheffield, Massachusetts. Now, thanks to my Scottish friends and with Bill McNeill in mind, I plan to give it a try.

It’s easier to stay at home and watch a movie on Hulu or curl up with a novel. But in times like ours, when we urgently need to connect and cooperate, why not try an activity that has brought humans together for millennia? If I can do it, anyone can.