Letter from Beijing: Love in the Time of COVID-19

Home>Berkshire Blog>Letter from Beijing: Love in the Time of COVID-19
Previous Next

Letter from Beijing: Love in the Time of COVID-19

My son Tom works in healthcare finance, and has lived in China since graduating from college. He was quarantined in Lanzhou during the 2009 swine flu epidemic, and now he’s experiencing the semi-quarantine of 2020.

In fact, I expected to be there right now and was looking forward to time with him and his wife when I was teaching at Schwarzman College. But I’m here and he’s there, sending regular posts and calling me more often than usual, frequently starting the conversation with, “I’m still alive, Mom.”

Here’s a letter about his experience so far, at home and at work.

When the security guards put bike locks on the east and south gates in my compound, I realized this quarantine was going off the rails. Security in Chinese compounds is usually slack. Pretty much anyone can stroll in behind someone with a key, and the ubiquitous deliverymen in their robin’s-egg blue and bright yellow suits are always sprinting from their electric scooters to the buildings inside.

Having been stuck inside for days, I just wanted to go to Carrefour to buy some supplies. “Only one way out,” a guard said. The west gate, that is, the one furthest from Carrefour.  As I reached the gate, the security guards looked me over from behind surgical masks and lab goggles. For the past three weeks, I have had to recalculate how to get anywhere nearby.

Given the reaction in Beijing, you’d really think the novel coronavirus (finally named COVID-19) was prowling the halls and back alleys of Beijing, striking down the innocent. Actually, according to the Johns Hopkins tracking dashboard, there have been 381 cases as of today in Beijing.

In a city of roughly 25 million, that’s almost nothing. A tiny percent of a percent. The number of deaths is a small fraction of that. There is no epidemic here. The person coughing next to me on the bus does not have it. A few hundred people who probably traveled to a particular Wuhan neighborhood, came back to the city and immediately went to the hospital. Most of them have recovered. 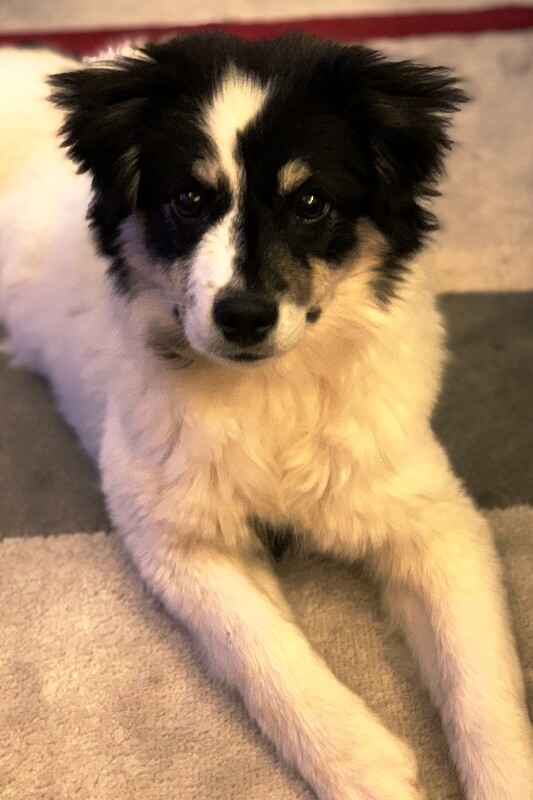 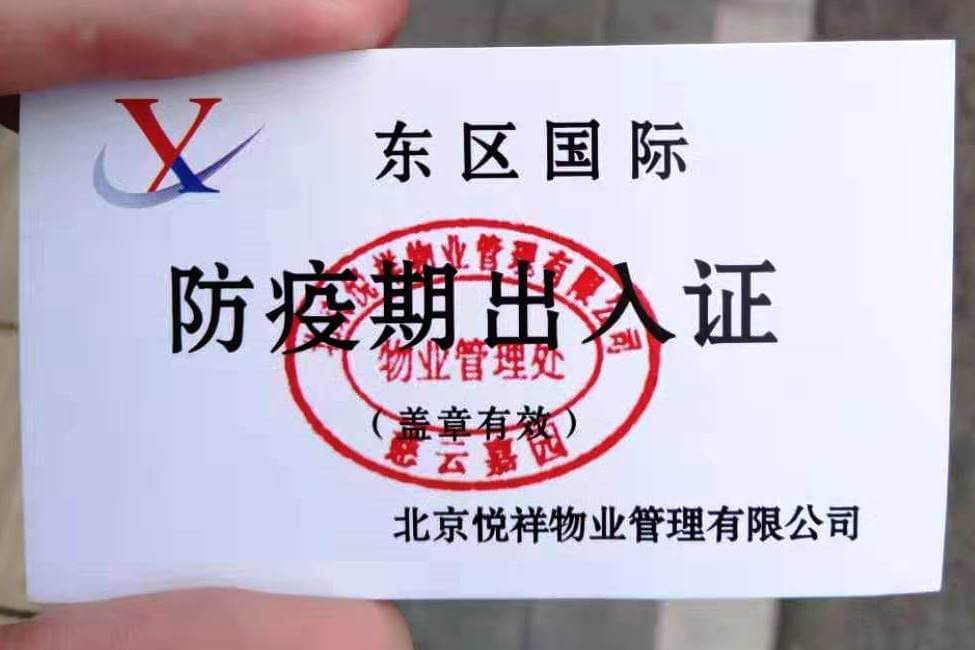 Yet as I take the elevator in my building, other tenants get on wearing double-layer masks, motorcycle helmets, and rubber gloves. To get into malls, I need to step in bleach baths, sign my name, and get my body temperature taken. A bored old man walks around the compound spraying bleach solution onto the sidewalk with a pump-handle pesticide sprayer. Two weeks ago, at 10 pm, two members of the compound management came to the door and gave us two completely unofficial entry-exit passes printed on cheap cardstock.

Friends in the States ask how I’m handling all this. Well, in a time of crisis, get a project. In this case, there’s no real threat from the virus, so we found Sophie.

She’s a border collie mix and was living in a small park between a security fence and a sewage treatment building just south of the JW Marriott in the CBD. After visiting her for a few weeks, we got her into a cage, took her to the pet hospital, and brought her home.

We thought about naming her Corona, but with paranoid hypochondriacs roaming the city, we decided that might not be a good idea. She has so much energy that I need to walk her a lot, and I often don’t wear a mask. At 5.45am, in windy, below-zero temperatures, only occasionally passing another who is 10 feet away, there isn’t any need. 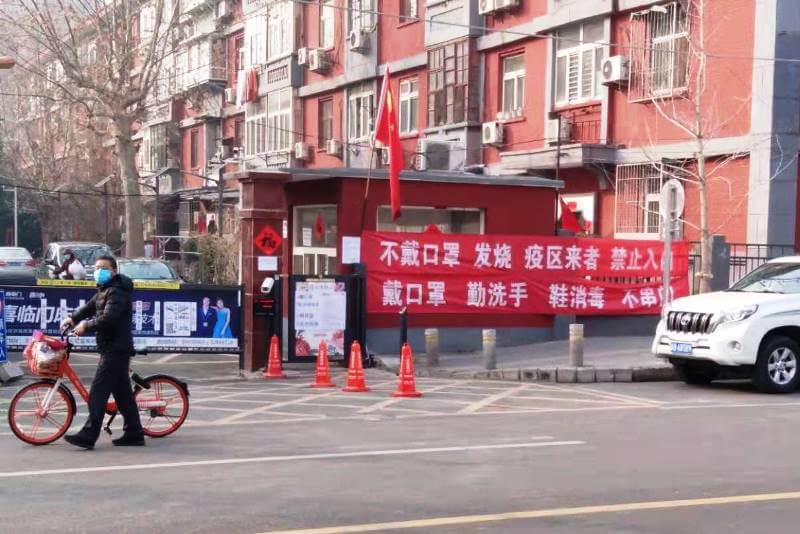 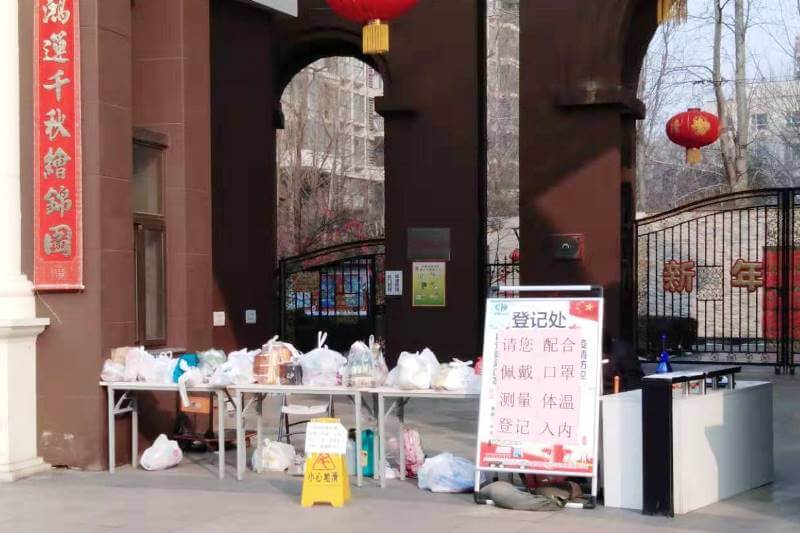 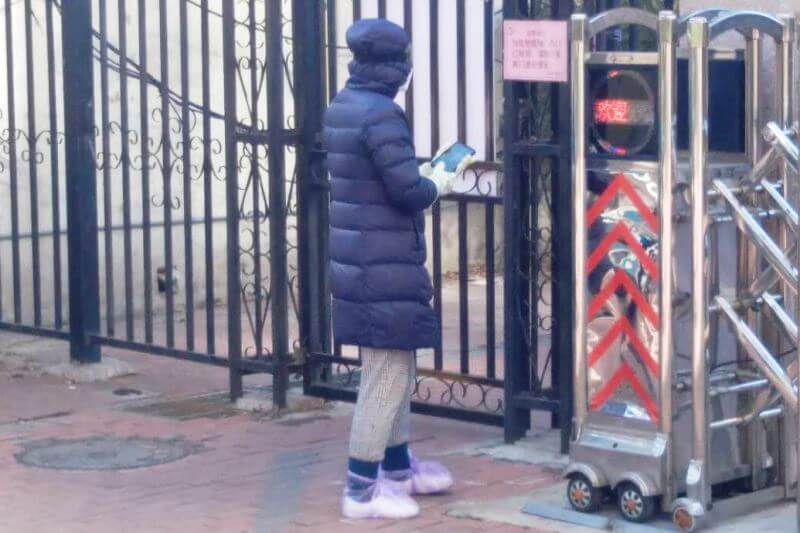 Clockwise from the right: One of the ubiquitous signs telling people to wear their masks.  |   A woman bagged against COVID-19.  |  Bleach baths to keep our shoes safe.  |   With deliverymen shut out of compounds, lunches and packages pile up out on the street for pickup.

But wearing a mask in China right now is performative. A mask does nothing when there isn’t a disease actually spreading.

I debate whether or not I owe my neighbors rigorous mask-wearing just to show that I’m not a jerk. If the virus got into my building, would they point at me: “Hey, that’s the foreigner! He doesn’t always wear a mask! He angered the gods by not performing the ritual!”?

During the daytime I usually shrug and stick the paper over my mouth. Within an hour it’s slimy and impermeable, a wet wall between me and the air. The people in my compound, clad in ski masks, double-layer masks, and plastic bags, twitch uncontrollably on the elevator when I take off my mask and clear my throat.

Right now, my office is open again, sort of. I work in a healthcare finance department, and our hospital is one of the official fever clinics for diagnosing possible cases of COVID-19. I have been very impressed with our medical team’s response, and our WeChat groups are extremely gung-ho, packed with positivity and training opportunities.

But you need a pass to get into the administrative building where I work, and hospitals are the last place anyone wants to be during an epidemic. I expect I’ll be busy shortly. We need to work out new assumptions, plans, forecasts. Forecasts are always guesses, but you only need to step foot in the hospital to see things are slow, people avoiding any healthcare facility like, well, the plague. Windows are flung open, to dispel the miasma. COVID-19 spreads, apparently, in invisible clouds of baleful intent drifting here and there. 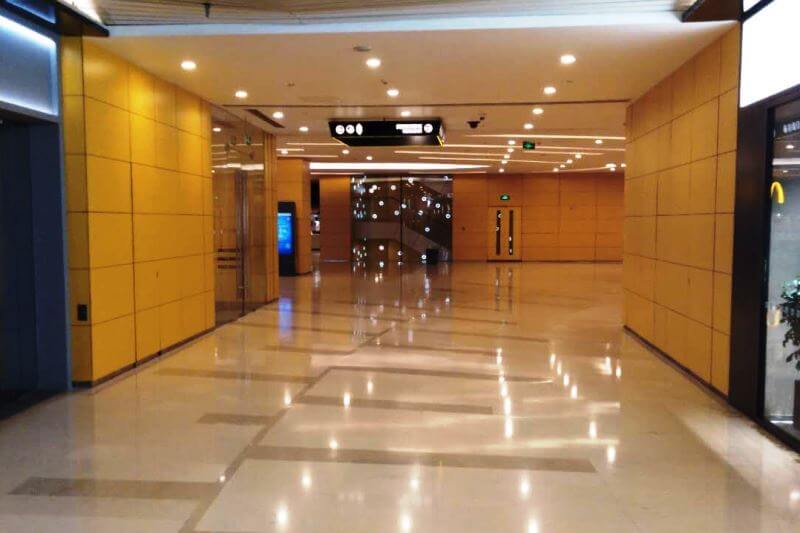 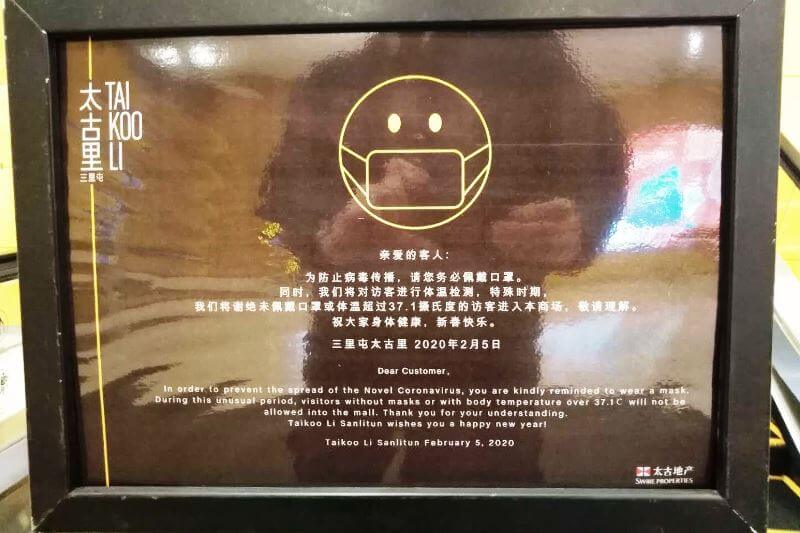 From what I can tell, the local government is just playing it super safe. Anyone who left the city needs 14 days quarantine, period. This seems like a calculated risk, especially given that the Chinese economy in certain sectors seems essentially dead. Restaurants are all closed, except a few (shout out to Chua Lam dim sum in SKP, keeping us fed!). I understand it is a rational choice by the owners to cut their losses to just salaries, not also the food and supplies they would waste opening up every day to no customers. Keep those masks on!   |   The Chinese consumption economy on Valentine’s Day.

It’s kind of surreal being in one of the rare open restaurants. Everyone walks in as a paranoid mask wearer, but then you sit down, the waiter brings you a menu (a prime virus vector!), and everything slides into normalcy. Sure, at Hatsune (the local sushi chain) they asked us to rub our hands down with some rubbing alcohol, but that’s not happening at each restaurant.

Some office buildings are lined with body-suited security guards from a zombie movie. I get my temperature taken at least 6 times a day. I’m pretty sure a lot of the temperature guns they point at various parts of my body are the same ones HVAC techs use. My temperature reading varies between 32.0 and 36.5 degrees. (Thirty-two is under 90 Fahrenheit, a perhaps fatal case of hypothermia.)

It’s clear that the actions the government has taken are effective. Right now, the growth in new cases has slowed (other than a spike due to new classification standards on February 13), and it’s not clear if cases are growing or just that existing cases are being identified. Regardless of COVID-19’s deadliness or transmissibility, this is a triumph of containment.

But the experiment we are seeing play out in real time, the world’s second largest economy shutting itself down for two months, will have real consequences. A recession of some kind seems inevitable, and recessions have their own body counts, from delayed medical care to suicide. All I can say is that I don’t envy the people making the calls, and I will continue to wash my hands at every opportunity. And spend as much time as I can with my new dog.

Finally, a couple of book recommendations. Science journalist Laurie Garrett has written a number of terrific books on disease (I read and admired The Coming Plague some years ago), and published an excellent article, “The Wuhan Virus: How to Stay Safe,” in Foreign Affairs a month ago. Key takeaway: gloves, not masks!

Bill (William H.) McNeill died in 2016 but I’ve been wishing I could talk to him about the COVID-19 experience. I pulled Plagues and Peoples off the shelf and could hear his voice as I read these words, “This book aims to bring the history of infectious disease into the realm of historical explanation by showing how varying patterns of disease circulation have affected human affairs in ancient as well as modern times.”

Plagues and Peoples was groundbreaking when first published in 1976, and it’s easy to see that he was thinking about the ecological issues that are so much on our minds today: “a fuller comprehension of humanity’s every-changing place in the balance of nature ought to be part of our understanding of history, and no one can doubt that the role of infectious diseases in that natural balance has been and remains of key importance.”

Bill explains why disease prospers in warmer, wetter climes, why densely populated areas are more prone to epidemics, and how the proximity of animals enables some diseases. He described armies and governments as macroparasites, bringing human agency and political power into the story, and included a nine-page appendix of epidemics in China, drawn for two early compilations.

For a quick introduction, here is Bill McNeill’s article on disease from the Berkshire Encyclopedia of World History.

Our work on Chinese cuisines and gastrodiplomacy has taken a new turn, and I’ll be writing about that soon. I have also commissioned an article on infectious disease for the new edition of the Berkshire Encyclopedia of Sustainability. This morning I’m reading chinadialogue’s “All eyes on China in the run up to climate and biodiversity talks.”