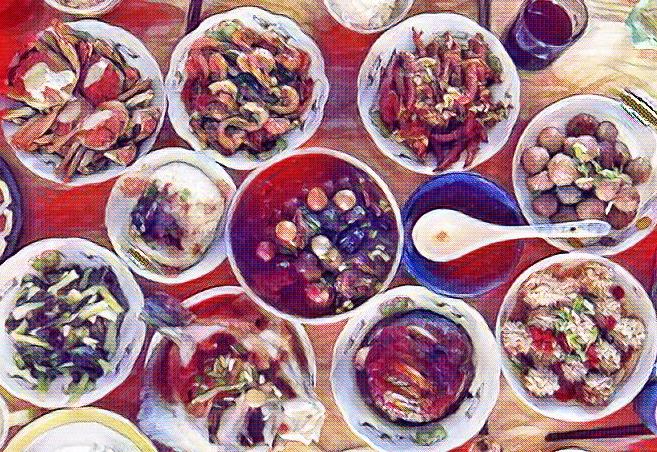 Marjolijn Kaiser, Berkshire’s China projects editor, is a fan of the American Thanksgiving holiday in spite of being Dutch and a vegetarian. She is quite the expert on turkey alternatives, but this year she’s been even more creative than usual: she’s developed a Thanksgiving menu based on recipes from Yuan Mei’s eighteenth-century gastronomical manual, which Berkshire recently published for the first time in English as Recipes from the Garden of Contentment.

The book is a series of opinionated essays rather than what we think of as a cookbook. Many of the “recipes” are recollections of, or comments on, dishes Yuan Mei has been served. You´ll have to rely on your own culinary curiosity and instincts to adapt them in a modern kitchen. But they are useable, and enjoyable, as we learned at the Canadian book launch on 30 October, when chef Nick Liu, of Dai Lo in Toronto, created a lunch menu inspired by the eighteenth-century instructions.

Chef Nick will be featured in an upcoming issue, but for now, back to the kitchen with the collection of recipes assembled by Marjolijn. If you do end up trying any of the dishes below, don’t forget to snap a picture and share it with us!

These little steamed cakes would be perfect as a snack after a refreshing afternoon walk or served as an appetizer before the family gathers around the table for dinner.

Boil chestnuts until soft, then combine with pure glutinous rice flour and sugar, then steam to make the cakes. Add melon seeds or pine nuts on top. This is a small dish served during the Chongyang festival [this year on October 7].

Rather than roasting the turkey in the oven (two things unknown or at least not very common in Qing-dynasty China), try boiling, searing, and braising a “fat hen” this year. The glaze that is created at the end is somewhat reminiscent of the traditional preparation of turkey. 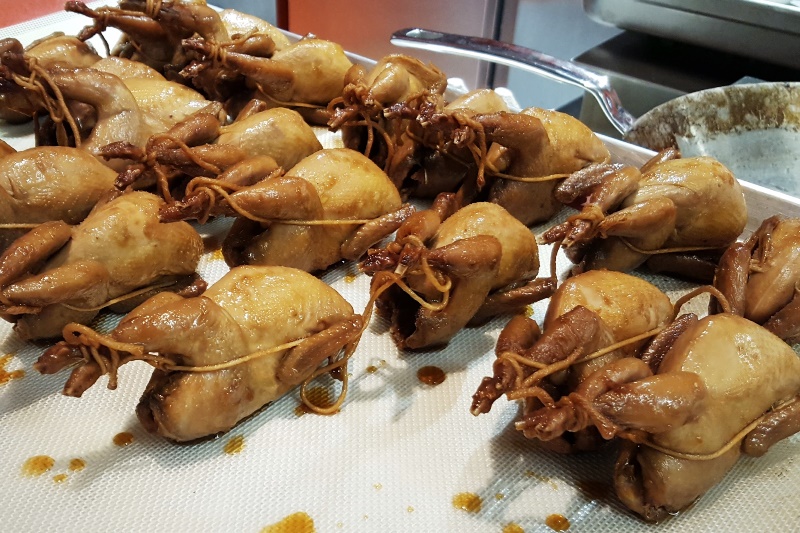 Not turkey, but braised quail, prepared by chef Nick Liu, based on Yuan Mei’s recipes.

Wash a fat hen clean and boil it whole in a pot. Add two liang of lard and four fennel seeds [This seems a strangely small amount, perhaps the measure was forgotten, and it should read four qian, or roughly 15 grams of fennel seeds] to the chicken and cook until it is around 80 percent done. Next, take out the chicken and sear in sesame oil until golden brown, then put it back into the liquid to cook. Simmer until the cooking liquid has thickened, then add autumn sauce, jiu, and a whole stalk of green onions, and simmer to reduce the liquid to a glaze. When one is about to serve the chicken, chop it into slices, and ladle the glaze on the chicken. One can also toss the chicken in the glaze or serve it on the side as a dip. This is a recipe from the household of Yang Zhongcheng, but the one from Brother Fangfu’s household is also good.

The comparison with goose might not be obvious, but the recipe sounds worth a try for those guests who prefer not to eat meat. It also uses those yams or sweet potatoes you might already have in stock for more traditional side dishes.

Steam ten jin [6 kg or 200 ounces] of bamboo shoots for a day and a night. Pierce the segments of the shoots and spread them on a board. In the same manner as making tofu, put another board on top of them and press to squeeze out the juice. Add one liang [40 grams] of toasted salt to the juice to make bamboo shoot sauce. One can make dried bamboo shoots from the pressed shoots by sun-drying them. The monks of Tiantai make this to give as gifts.

Forget Brussel sprouts or green bean casserole, and try one these savory and quite easy side dishes. If you are interested in the history of how celery was used in dishes and tonics in the West, listen to this podcast from America’s Test Kitchen: https://www.americastestkitchen.com/proof/celery

Celery is a su [vegetarian] food item. The plumper it is, the better it tastes. Choose the white stalks to stir-fry, add bamboo shoots, and cook until done. People now like to stir-fry it with pork, confusing its flavor and rendering it largely undefinable. When not fully cooked, celery is quite crisp but flavorless. When mixed raw with pheasant, it is quite the dish to laud over.

As is common of many of Yuan Mei’s “vegetable” dishes, this bok choy can be enriched with all sorts of animal meat add-ons.

Bok Choy can be stir-fried or braised with bamboo shoots. It can also be braised together with slices of dried-cured ham or chicken broth.

Nothing like cranberry sauce, but equally easy to make and quick to pull together, this little dish adds a nice crunch to the meal.

Peel the walnuts and almonds. The hazelnuts do not need to be peeled. Fry the nuts in oil until they are crunchy, then add soy sauce but do not allow them to become too brown. The amount of soy sauce that needs to be used depends on the amount of other ingredients.

Okay, now we’re cheating, because this recipe does not come from Yuan Mei. But a Thanksgiving without pumpkin is like Christmas without pudding or Easter without eggs. So to make Chinese-style “pumpkin pies,” head over to our friend Elaine at https://www.chinasichuanfood.com/chinese-pumpkin-cake/ and serve these tender yet crispy cakes while still warm to top off your alternative Thanksgiving dinner.

And if that still does not convince you that Chinese food and Thanksgiving go together, take a look at this menu from 1944 that offered Chinese-style dishes alongside more the traditional Thanksgiving fare.