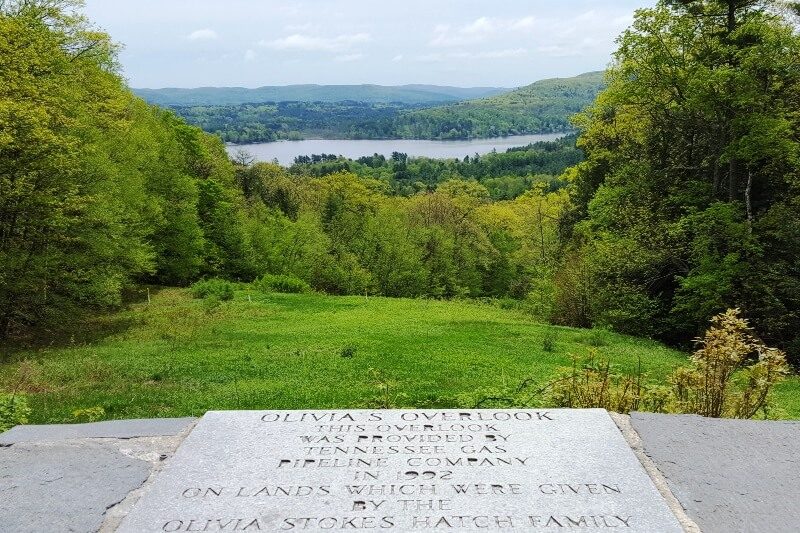 Our Heart’s Garden, A Story of Enlightenment

“Your heart’s garden,” said the caller breathlessly. “I was up there just now, sitting in the sun with the tulips falling over my head. And I knew. It should be saved.”

Tulips falling over his head? I waited.

I’d answered the phone only because it was the Friday before Memorial Day and everyone else had left the office. This was clearly not going to turn out to be a library order for one of our encyclopedias.

He had stuttered at first, “Is that Kristin, Karen? Karen Kristen? You don’t know me. Someone said … said I should call you … call you about the garden … the heart’s garden up on the hill.”

My garden was on “The Hill,” a neighborhood in the little town of Great Barrigton, Massachusetts. Did he mean tulips, or was he talking about the ridiculous number of daffodils I’d forced my kids to help me plant? Or was it a complaint about the landscaping? We’d created a stir that spring by bringing in a lot of boulders to recreate a streambed that old Dr. Haskell said had run down from the spring when h

e was a boy. Mingling with neighbors before the annual Town Meeting a few weeks earlier, the rocks in my garden seemed as worrisome as my latest school board battle.

My hand hovered over the phone’s cradle, ready to disconnect.

“Your heart’s garden,” he murmured.

He must be from Austin Riggs, the famous mental hospital in Stockbridge. How had a patient at Austin Riggs got my name and number?

“The Eagle’s going to run a story,” he said, as if that explained everything. “Do you know Derek?”

Everyone knows Derek, a former boxer who wears shorts all year round.

“They call me Heartman. It’s at Olivia’s Outlook,” he blurted. “Do you know Kripalu?”

I admitted that I did know Kripalu, the yoga retreat center that used to be a commune. Some of the loopiest people I’d met in the Berkshires had been Kripalu devotees.

“It’s above Kripalu, and the kids want to save it, too. They could at least wait till after the kids have their prom pictures taken there.”

I had no idea what or whom he was talking about.

“And how,” I asked cautiously, “did you happen to call me?”

Heartman didn’t know, or wouldn’t reveal, who had sent him to me, but he did tell me how to get to this mysterious garden.

On any other day I would have brushed off the call, but I somehow could not resist the image of cascading tulips. “I’ll try,” I said, then gently added, “I’d like to see it. I’ll do what I can.”

“Go see it,” he said fervently, “your heart’s garden.”

The next morning, the sun was clear and cool on the translucent lime and rose-colored leaves. The breeze still held a hint of mountain chill, a reminder of harsh winter. I drove through the sleepy village of Housatonic with its gingerbread houses and huge abandoned mill buildings. Up the Housatonic River, sparkling around myriad boulders. Past the Botanical Gardens and through tiny Glendale, with its classical and pristine brick houses.

After Tanglewood, I wondered if I had been sent on a wild goose chase, driving around long curves where there was nothing but forest, and massive gates marking invisible estates. Just as I was about to give up, with a sense of sorrow I didn’t want to admit, I saw a white sign on the left. There was a small parking lot with a stone wall on one side.

Two hikers were stretching. I parked and strolled around the margins of the parking lot, carelessly, casually. There were tulips blooming here and there, and I felt a surge of anticipation.

“Those don’t look like hiking shoes,” said the woman hiker in a friendly way, pointing to my gardening sandals.

I walked to the wall and looked out over the woods to the Stockbridge Bowl, with the expanse of Berkshire Hills around and behind it. A glorious spot. Heart stopping. I held my breath and there it was, on the hillside below me, a huge stone heart.

It was in the middle of a long rough slope that stretched from the parking area down to the woods. I approached slowly, trying to take in the whole picture. From above, I’d been able to see the low curved stone wall, made of glossy local slate. As I got closer, I realized why Heartman had described the tulips as being over his head. The heart shape was the frame for a sunken garden, with a slate bench below ground level.

I climbed down and sat on the bench, already warm from the sun. In the distance I could see the Stockbridge Bowl, a huge round glacial lake. I could see the trees, and blue spring sky, and I was surrounded by flowers. They were cherry red and yellow, peppermint pink and white. Some were as purple as grape soda, as brightly orange as a tangerine. White hyacinths perfumed the air.

The flowers swayed with the gentle wind. Some were classic tulip cups and others had exotic Turkish points, and they were planted so thickly the flowers were forced to spill over the stone in every direction. There was every possible color and shape, a veritable catalogue of blossom and crazy quilt of color.

I sat on the sun-warmed bench and tried to take it all in. The view, the scent of cold mountain springtime, the hyacinth perfume, the astonishing color.

The kaleidoscope was not my kind of design. I like white plates and black sweaters. I plant great swaths of classic King Alfred daffodils. I even hate mixed nuts (give me straight cashews or almonds, please).

But I was utterly seduced and enchanted by this curious garden. Everything that people try to conjure up with springtime celebrations, with Easter eggs and Easter bonnets, candy rabbits and pots of pink hyacinths – hope and laughter, boundless joy, the exuberance of life renewed – was there in those flowers, dancing in the sunshine above the warm dark stone.

The eccentricity and extravagance that the Berkshires have specialized in since the days of the oil barons in their “Cottage” mansions didn’t look quite the same after that morning. Yes, I would go on complaining about the dotty new agers and the trust fund babies, the life coaches and the job applicants who tell about their spiritual quests. But we all came here, we outsiders, on one quest or another.

I tipped my head back and looked at the tulips moving gently against the bright blue sky, and thought about Heartman whom I’d never met, and the stranger who had sent him to me. We all loved this beautiful region, this particular place on earth.

At the parking lot, there was a van from Canyon Ranch. A dozen people were waving their arms in the air. Their leader was a fit man with grizzled hair who glanced at me as I rounded the wall. He smiled, and I knew he knew where I had been. He turned back to his Canyon Ranch group and began leading them up the hill, away from our heart’s garden.

That took place in 2002. A week ago, something in the air reminded me of Heartman’s call. I went back to Olivia’s Overlook and took the photograph you see above. The garden is gone, and stones have been piled to make the grassy slope inaccessible. The view is still beautiful.

And because we need tulips, here is a photograph from a place that is now part of my life, the park by the World Financial Center in New York. 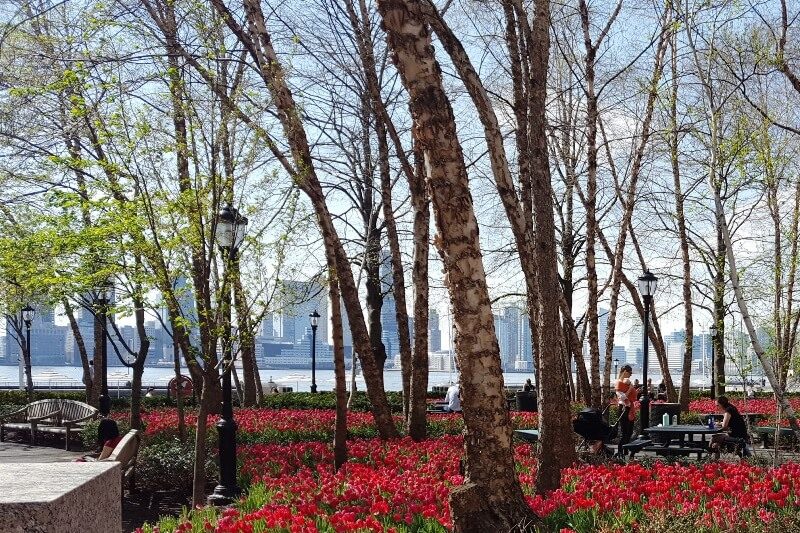 I failed Heartman. Of course I could have called Derek, that was one solid lead, but I didn’t. I no longer remember why. Pressure of work, perhaps, or thinking that someone else would fight that battle. Or being admonished against getting involved with the crazies again (there was, admittedly, that failed affordable housing task force, and the microenterprise committee I’d wasted so much time with). I was trying, round about then, for the umteenth time, to resume work on A Smaller Circle, a book about the search for community I’d had a contract to write for Random Century in London. But the garden stayed with me, and the story has been tucked in my “community” files every since then.

In the intervening years, my life has become far less local: my publishing is more international, and I spend nearly as much time in New York City as I do in Massachusetts, and I have a city life I love. But the Berkshires, especially at this time of year, is a special place indeed. The Train Campaign has me obsessing over data and demographics, so it’s nice to be reminded of the natural beauty that enraptured me that day long ago.

I found one article that explains how the garden was destroyed, but no photographs. I’ll look for more information, and perhaps I can find someone with a graduation photo taken with the tulips. I won’t be able to ask Derek, because in my search I learned that he died last year (Berkshire Eagle story here), another sorrowful side to this story.