A major barrier to effective international action is skepticism about climate change in the United States, the richest and most powerful country in the world, and the country with the largest scientific establishment and the largest number of Nobel Prize winners. This skepticism baffles many. It is true that powerful interests have conducted a well-funded and skillfully managed campaign of disinformation, efficiently exploiting every loophole or ambiguity in the discussions about climate change. But their success also depends on ignorance—on the fact that not enough people have enough understanding of the science to see through bad arguments.

Do we need more science education? Not necessarily, because understanding environmental issues requires some familiarity with the social sciences and humanities as well as the natural sciences: it requires a global perspective and also a sense of how the environment changes at many different timescales. Such perspectives lie at the heart of a new approach to education known as big history. 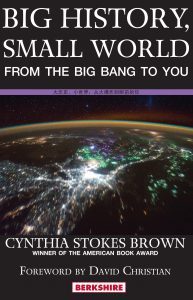 Like all origin stories, big history uses the best available knowledge to construct an evolutionary map of the entire universe, onto which individuals and societies can map themselves. Such stories empower students intellectually by giving them an overview within which they can situate themselves, their home communities, and everything they know. Origin stories offer a view from the mountaintop: that view may lack detail, but it shows how different landscapes fit together, and that perspective can transform how you see your home landscapes. Their absence from modern education is anomalous and disastrous, because it leaves students without compass or sketch map in the vast tsunami of information available on the Internet.

Big history courses will be particularly valuable in informing students about the global challenges that the planet faces. Three aspects of big history are particularly relevant: (1) big history studies the past at multiple scales; (2) it teaches interdisciplinarity by leading students seamlessly from cosmology to geology to biology and human history; and (3) big history is global and holistic, so it can help students see humanity as a global species facing global problems requiring global solutions. Each of these perspectives can contribute powerfully to environmental understanding.

This article is adapted from an article that originally appeared in March of 2012 in Volume 3, Issue 3 of the online journal Solutions.

Many environmental issues, from mass extinctions to climate change, can be understood only when studied at multiple scales, from a few months or years to hundreds of millions of years. Understanding that our oxygen-dominated climate was created over the course of billions of years as photosynthesizers pumped oxygen into the atmosphere is critical to understanding the major drivers of climate change. Students of big history, like students of geology or cosmology, have to stretch their imaginations to the point where they really do understand the difference between a hundred years and a billion years.

When it comes to the study of human history, big history can expand on the broad perspectives of world history. Big history considers the past at such huge scales that it can attempt, as more conventional types of history cannot, to understand the trajectory of the biosphere as a whole, and to see human history as part of that larger trajectory. It therefore provides a natural framework for the type of world history that will be needed increasingly in a world facing challenges, from the threat of nuclear war to that of ecological collapse and climate change, challenges that cannot be tackled nation by nation. Big history provides a natural framework for the construction of a modern history of humanity that places issues such as climate change within an appropriate context.

Within that framework, human history as a whole divides naturally into three main eras: the foraging era (the Paleolithic era, up to c. 10,000 years ago), the agrarian era (dominated by agrarian societies and continuing until just a few centuries ago), and the modern era. (The emergence of a possible fourth era marked by humanity’s impacts on the biosphere, called the Anthropocene, is the subject of another article in this volume.) Human impacts on the biosphere were mostly local during the Paleolithic era, although our Paleolithic ancestors may have had a significant impact on animals (by contributing to the extinction of many species of megafauna) and plants (by firing the land and transforming the distribution of plant species). In the agrarian era, humans began to have significant impacts on the atmosphere by reducing forest cover and introducing paddy rice farming (which increased atmospheric levels of the major greenhouse gases, carbon dioxide and methane) and through metallurgy, which raised lead levels. (Evidence for higher lead levels is present in Greenland ice cores [Ruddiman 2005].) But of course the largest impacts of all have appeared in the shortest of these periods, since the Industrial Revolution, when humans began to use fossil fuels on a large scale.

To understand such a periodization it is vital to feel comfortable moving between different temporal scales. Big history helps students move easily between these and even larger scales and grasp the critical differences between different scales. Of the three major eras of human history, for example, the first is by far the longest, lasting for more than 95 percent of the time that humans have lived on Earth, whereas the modern era is the shortest, lasting roughly a quarter of a millennium. Perhaps 12 percent of the roughly 100 billion humans who have ever lived, lived during the foraging era, while 68 percent lived in the agrarian era, and 20 percent in the modern era.

Many environmental issues cross multiple disciplines, meaning that looking for solutions will require multidisciplinary research efforts. It is necessary, first, to have some grasp of the core sciences: how do climatologists study past climates? What can we tell about climate fluctuations on scales of hundreds of millions of years? How do natural cycles of elements such as carbon and nitrogen work, and how are anthropogenic processes affecting them? What processes drive global climates? But it is also necessary to understand something of the economics of industries from timber extraction to power generation, and also to understand the astonishing history of increasing global energy use since the Industrial Revolution. Finally, it is important to understand the politics of global and national negotiations over carbon emissions or debates over the reality and extent of climate change. The politics may turn out to be particularly important as it is becoming increasingly clear that even where solutions to global warming are scientifically well understood, global political processes may be incapable of introducing them in a timely manner.

As the Australian climate scientist Will Steffen says, “Climate change is like no other environmental problem that humanity has ever faced. . . . Perhaps no other problem—environmental or otherwise—facing society requires such a strong interdisciplinary knowledge base to tackle; research to support effective policy-making and other actions must cut across the full range of natural sciences, social sciences (including economics), and humanities” (Steffen 2011, 21).

An example of research that crosses these disciplinary borders is IHOPE (Integrated History and Future of People on Earth), a research project that is building a detailed account of interactions between humans and the environment over several hundred thousand years (IHOPE n.d.). Like IHOPE, big history will help students become comfortable with the idea of moving easily between different disciplines, because the conventional big history syllabus already does this, more or less seamlessly.

Environmental issues cannot be understood in isolation. Climate change, acidification of oceans, high rates of extinction, and deforestation are all linked and have to be seen as expressions of a single phenomenon: the astonishing technological creativity of our species that has culminated in the Anthropocene epoch. To solve these problems, we must understand what links these issues, and we will need a global approach because they cross national borders. Again, Will Steffen puts it well: “Climate change is truly global in that it is centered around the two great fluids—the atmosphere and the ocean—that transport material and energy around the planet” (Steffen 2011, 22).

Solutions to global problems will also require some sense of global citizenship, a sense of shared humanity across the world. Because courses in big history encounter humans first as a global species rather than as a cluster of national “tribes,” big history provides a natural introduction to such a global perspective. For this reason, education in big history might help create a world in which negotiators at summits on major global challenges will bring with them not just the national perspectives of their governments, but also the large-scale, interdisciplinary, and global perspectives of big history. The chances of success will surely be greater than they are today.

Comments from one student of big history hint at the transformative power of the big history perspective: “When I was first asked to consider my role in the universe four months ago . . . I do not think I fully realized there was even a living community around me, never mind an Earth full of other humans and an entire universe beyond. . . . But after this long, incredible voyage of exploration . . . I have a newfound sense of what the universe is. I have learned . . . that we are all part of the Global Future, and I can make a difference in my life as well as the lives of others. . . . My role is now to change my ways and respect this beautiful planet that granted us life, and to get others to join me” (Rodrigue 2011, 77).

This article is adapted from an article that originally appeared in March of 2012 in Volume 3, Issue 3 of the online journal Solutions.