Completing the circle begun under DENG Xiaoping in 1980

Completing the circle begun under DENG Xiaoping in 1980

This article was published during the London Book Fair in the Chinese publishers’ newspaper (download the PDF by clicking here): 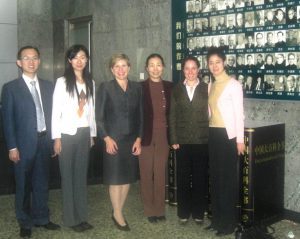 Berkshire Publishing Group has a Chinese name, 宝库山, carefully crafted by a group of friends who understood my vision for the company. We’ve become known, I’m happy to say, for our award-winning books about China, and for publications on world history, “big” history, and environmental sustainability translated into Chinese. Berkshire titles are sold in print around the world, and many of them, including the Berkshire Encyclopedia of China, are available online through Oxford University Press.

Our new partnership with our old friends at the Encyclopedia of China Publishing House is the culmination of a dream I had in 2001, when I made my first trip to China. My two children, then 12 and 15, came with me. We went to Beijing and Xi’an and all the way across China to the desert caves of Dunhuang and the remote city of Ürümqi.

I fell in love with China: the conviviality and humor of the people I met, the sense of possibility, the energy and enthusiasm, and of course the wonderful food. It was all new, and all irresistible. As an environmental author, with two books translated into Chinese, I was even then acutely aware of the influence China would have on my own and my children’s future, and I wanted China to be part of their world.

That trip set me on a new path as a publisher committed to building bridges between the US and China. I was convinced that every American needed to know more about China’s history, culture, and language, its jokes and popular culture, and its politics and economic system in order to be ready for the 21st century.

A landmark event along that path took place in November 2007, when I visited the Encyclopedia of China Publishing House for the first time. Seeing the scale of the ECPH Encyclopedia of China, I felt awed, but I also felt a great sense of collegiality and common purpose.

In those early years, we were often asked how a Western press could possibly tell the world about China. One of my colleagues passed on the remark of a Chinese scholar who said that he hadn’t thought such a project was possible, “But somebody has the nerve to try. Best wishes to them.” We have been privileged to work with an extraordinary group of Chinese and Western scholars, in the US and in Europe and Australia. Among them is Professor Kerry Brown 凯瑞布朗, who will be speaking at the London Book Fair when we announce our partnership with ECPH and the founding of the International Editorial Center.

We continued to meet with our colleagues from ECPH, in Beijing, London, Frankfurt, and New York, where I invited them to visit the National Committee on US-China Relations, an organization I belong to, in 2012. The NCUSCR has promoted constructive relations for over fifty years. A past president of the NCUSCR, John Holden 何立强 , now associate dean at Peking University, was a translator for the ECPH delegation to Washington DC in 1980. Deng Xiaoping had encouraged an agreement between Encyclopaedia Britannica and ECPH to translate and publish the entire Encyclopaedia Britannica into Chinese. Holden says, “Those were heady days in US-China relations, and there was a lot of excitement in both countries that such an enterprise was happening.” Today, we are completing the circle, with our initiative to make the Encyclopedia of China available in English.

And the China Encyclopedia USA is also a beginning. We intend to make it a foundation for increased cooperation and an expanding presence for ECPH in global publishing. The idea of creating an International Editorial Center arose as we discussed our common interest in people-to-people exchange. This is especially important now that China has joined the International Publishers Association (in 2016, when Richard Charkin, who will also be speaking at the London Book Fair launch, was president). The International Editorial Center will facilitate serious dialogue about issues facing publishers and authors, practical internships and training, and the development of tools and systems for bilingual and international publishing.

As President Xi said on his last trip to the United States, “It’s always important to make an effort to get a deeper understanding of the cultures and civilizations that are different from our own.” Books in translation improve our understanding of other people and cultures, of histories and values that are different from our own. They also show us how much we have in common – and that what unites us is far greater than what divides us. This makes the China Encyclopedia USA project and the International Editorial Center truly important to all who care about global cooperation.