Home>News>Press Releases>A global perspective (first published as “Seeing the World” in the Berkshire Savant, 2005)
Previous Next

The story below, written by Karen Christensen in 2005, explains what happened when an American family traveled to China, Kazakhstan, and Japan in April 2001. At that time, Berkshire Publishing was developing the Encyclopedia of Modern Asia for the reference division of Charles Scribners, a  major New York company that is now part of Cengage.

“We have to go to Central Asia,” I said in December 2000.  My then-husband’s response was to buy me a book called The Most Dangerous Places in the World.

“You’re an anthropologist,” I argued, “you should want to see all these places for yourself.” But I lacked allies. The kids started clipping articles about kidnappings and nuclear testing in places on my Possible Destinations list.

“Kidnapping would be an adventure,” I countered.

Our trip began in April 2001, an interesting historical juncture: the United States was negotiating with China over a grounded U.S. spy plane and its twenty-four-member crew, and this was following on the heels of a U.S. nuclear submarine’s having sunk the Ehime Maru, a Japanese fishing boat.

As we drove to the airport, David said, “Do you realize the country we’re on best terms with that we’re visiting is Kazakhstan?”

From the time we started work on the Encyclopedia of Modern Asia in 1998, we had intended to go there, see it for ourselves. And we would take Tom and Rachel, then 12 and 15, with us. They had been born in London but had spent most of their lives in a small town in Massachusetts. This was the chance, I thought, to make sure they grew up with a global perspective. Asia would be increasingly important throughout their lifetimes, and we wanted it to be somewhere real, truly a part of their world.

We arrived in Beijing after twenty-four hours of traveling, late in the afternoon. Within an hour of arriving in China we were in taxicabs organized by a Chinese friend, hurtling through Tiananmen Square, that granite plain dominated by a huge picture of Mao. 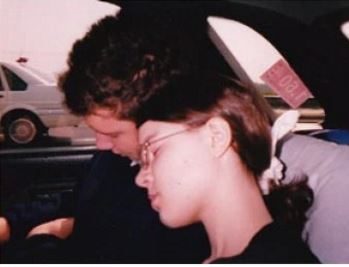 Later, watching Tom and Rachel nod over the Peking duck at a restaurant where we were the only Westerners, I worried that my plan wasn’t working. Rachel whispered, “I feel so strange. I want to go home.”

David and I didn’t fit any tourist category. We were too young for the tour crowd, but too old for backpacking and flophouses. We had business meetings, but we also had our children with us. We went as so-called independent travelers—a misnomer if you don’t speak the language—and much of our day-to-day planning consisted of winging it and hoping for the best.

There was the time in Urumqi, a city in the very west of China, when the hotel doorman helped us negotiate a cab to take us on an outing to Heaven Lake, a two-hour trip into the mountains. “Tian shi,” I said, remembering the guidebook. The driver nodded confidently but we had a moment of sinking hearts when the doorman called his farewell: “Hoping to see you again some day!”

We visited Dunhuang, a tiny desert city along the Silk Road, now on the tourist trail because of the Mogao Caves, which are filled with a thousand years of medieval Chinese religious paintings and statues. I had packed chocolates and a dozen small sugar eggs, hollow eggs with a tiny icing scene inside, for Easter. The girls working in the hotel were about the same age as Tom and Rachel. “Want to give some of our Easter treats to the girls in the restaurant?” I asked. Through a series of embarrassed signs and hand motions, and with much giggling, the gifts were handed over. Much of our communication was accomplished in this manner; pantomime being our improvised universal language.

Of course many people spoke English. The taxi driver we hired in Xi’an, Hank, had excellent English that he had learned from CNN. He was upset with the Chinese government because “they are sending some soldiers, American soldiers, back to America.” He thought China should stand up to the new U.S. president, George W. Bush. “Tourists here, about half support Bush. Half do not like him.” He didn’t understand why Clinton wasn’t still president. “In China, if someone does a good job, he can be president for a long time.”

Tom and I were in the back, listening. Tom joined in with an obvious question, “When do you hold your elections in China?” I motioned to him not to take the conversation that way, while Hank ignored the question and blithely continued his conversation about Clinton, whom Chinese women, he said, found very attractive. 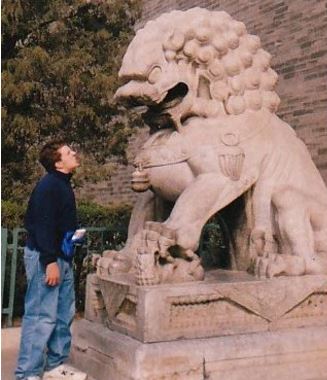 Before we left home, everyone had said, “It’ll be so educational for the children.” But educational hardly conveys the mind-expanding quality of being in another culture. The benefits aren’t primarily in having seen the terra-cotta soldiers or the Great Wall. Questions flowed naturally from things we saw and had to deal with: “What are tariffs?” “What form of government does Japan have?” “What’s the relationship between the Kazakh and Russian languages?” “Which came first, the Roman or Cyrillic alphabet?” And, from Rachel: “Why don’t you ever see any books by Karl Marx?” It turned out that she wanted to read Marx for herself, to see what Communism was really supposed to be. “We’ve got Mao’s little red book, in English,” David offered. Rachel was offended. “I don’t want to know what Mao said. I want to read the original.”

As the end of the trip approached, we began to panic a little. Home would be boring. Everyone talking in English. No bicycles on the sidewalk. No dumplings for breakfast.

“Next time we come to China…” said Tom as we walked through a crowded market one day. I don’t know what exactly what he said next, because it didn’t really matter. It could have been: “We’ll speak some Mandarin.” “We’ll know about hiring taxi drivers.” “We’ll stay for longer.” I gulped with relief. He was having a good time. He wanted to come to China again.

Karen Christensen is CEO of Berkshire Publishing Group and coeditor of the forthcoming Encyclopedia of Global Perspectives on the United States. Her memoir of work on the T. S. Eliot Letters, “Dear Mrs. Eliot,” was the cover story in the Guardian’s Review, 29 January 2005.