My first experience with “big publishing” involved Salman Rushdie, so I was sorry not to get to t

he Frankfurt Book Fair in time to hear his opening speech today. Iran is boycotting the Fair, and there was apparently high security, and Rushdie still has bodyguards. It’s hard to believe, as I found it hard to believe that there were armed policemen at the London offices of Penguin when I went to meet a real editor for the first time, in 1990. 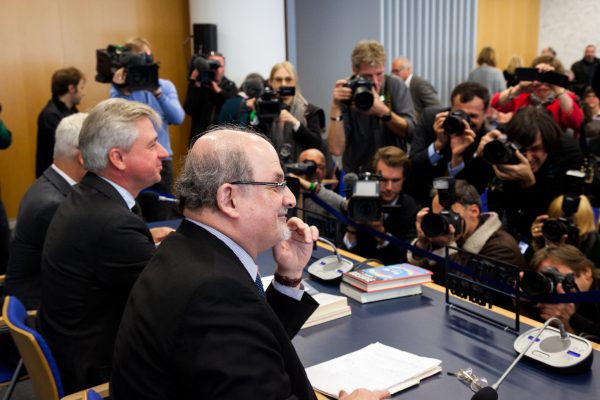 Armed police of any kind, let alone police with machine guns, were a strange and disorienting sight in London. My own writing led to a lot of legal threats from various manufacturing associations, and McDonalds, the US hamburger chain. McDonalds was threatening, and financially catastrophic [story here], but the situation Salman Rushdie was in was something it was hard to take in: his life at risk over a novel.

Rushdie spoke today at Frankfurt about the importance of free expression, and you can read about it here.

For another angle on the risks writers run, I recommend Assignment China, a series produced by the China Institute at USC. I just watched the episode “Follow the Money” and there’s a lot about the challenges of reporting in China today.