The shipping information on the box I am sending to myself after a short trip to the US pretty much sums up my culinary experience of the past week and a half. I hadn’t been here in over a year, and I’d forgotten how much I missed some of these items. Before departure, I already decided I would eat only bagels for breakfast, since those are surprisingly hard to come by here in Germany (even a visit to the Jewish quarters in Antwerp, Belgium, didn’t yield much bagel-success, which makes me wonder if they are a typical US invention?).  But as soon as I arrived, I realized there were many other treats I needed to catch up on, and so began a week long diet that was dominated by round- or animal shaped foods: bagels, (giant) muffins, tater tots, burgers, ice cream, Goldfish (“fishies”), and of course Peeps. 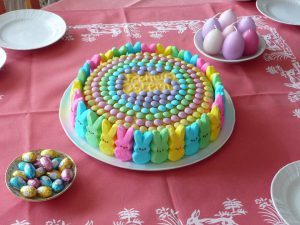 Now, you should know that I generally consider myself a healthy eater – I cook from scratch most days, am vegetarian, and enjoy exotic cuisines – although I do have a mild chocolate addiction and a weakness for baking. While I was living in the United States, I often wondered about, and marveled at, many of its dietary and nutritional habits. There is the issue of size, of course, that I never quite got used to. To this day, I still have to remind myself to NEVER order anything medium or large, because it is just too much. With one exception: muffins. I know quality is more important than quantity, but boy does a jumbonormous Double Chocolate muffin the size of a melon for breakfast make me happy (and crash shortly after consuming it, but that’s another story). My dad is still talking about the giant muffins he had when visiting me in the United States. Compared to these monsters, regular size cakes here don’t even deserve to be called mini-muffins.

As I caught up with colleagues and old friends, my obvious excitement about being able to indulge on all these seemingly ordinary food items was generally met with an endearing smile or appreciative nod. It is hard to make somebody who has easy access to, let’s say, tater tots (and who is perhaps over-exposed to said item) see the beauty and genius of that crunchy-on-the-outside-soft-on-the-inside piece of potato (wannabe?) heaven. I made it my duty to remind those around me of the fact that these items were absolutely wonderful, if they are enjoyed in moderation, and I like to believe I generally succeeded in doing so, with one exception: Peeps.

If the people at Peeps see an unexpected and seemingly unexplainable peak in their sales numbers for the first week of April, in the Western Massachusetts area, I can solve that mystery for them: it was me. I do not know why, but these colorful, corn-syrup-loaded, gelatin-filled, cute animal-shaped marshmallows are irresistible to me. They are a guilty pleasure, like binge-watching trash TV or Katy Perry songs (which, for the record, go great with beer and tater tots at the end of a work week: we institutionalized this in the office as “beer o’clock,” every Friday afternoon at 4 PM). But I have not been able to convince anybody during my week long stay of this fact. Instead, I was met with rejection and contempt at the mere mention of these soft, fluffy candy friends. Even the attendant at the post office looked disapproving at my package list and said “Sending home Peeps, are you? I don’t really like them.” My offer to bake a Peeps-decorated cake for our office party was met with equal disdain, and instead I opted for a continental mocca-sour cream cake. They’ll regret it when I send them pictures of my Easter Peeps cake!

While waiting on my flight out of JFK airport, I saw in the corner of my eye the bright yellow glow that only a pack of fresh Peeps has. Instinctively I was drawn towards it, and my firm belief that Peeps could be the latest and most successful American export product EVER was confirmed when I realized that the woman eating them was an elderly Irish lady. Peeps have potential, mark my words. Why else would I have just have spent US$50 to send 6 boxes home….

UPDATE! The $50 was totally worth it. See here the results of a few hours baking and decorating fun: a double-layer sponge cake with lemon curd, butter cream, and a good amount of M&Ms and Peeps.