For Immediate Release: 23 June 2009
Great Barrington, Massachusetts—The world’s least likely China expert may be a New England publisher, Karen Christensen, whose interest in preparing her two children for the 21st century led her to start a project that the real China experts thought impossible: a 5-volume, 2,800-page Encyclopedia of China. As well as being available in print, the Berkshire Encyclopedia of China is now available online on various platforms (with more coming).

No one else had done anything on the scale or with the breadth of coverage Karen Christensen had in mind. “When it really hit me, after about a year, just how unique and huge and impossible this was, it took my breath away. I told my daughter Rachel that we were doing something none of the big publishers had tried. She rolled her eyes, looked me straight in the face, and said, ‘That’s no surprise, Mum. No one else is as crazy as you are.’ 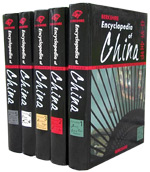 Christensen didn’t taste Chinese food till she was 12, when her family moved to the Silicon Valley from Minnesota. She read stories set in Japan and China, but it was Europe that really interested her. After college she moved to London and worked there for almost 10 years, in literary publishing (her memoir about working on the T.S. Eliot Letters was published in the Guardian Review). Only in the late 1990s did Asia really get her attention. But that was partly by accident. “I was talking to an editor at Oxford University Press in New York. Suddenly I heard myself say, “How about an Encyclopedia of Asia?”

Christensen doesn’t know what brought the idea to her lips that day, but she knows that as she negotiated terms with the eventual publisher, Charles Scribners Sons, she had one simple measure. There had to be money in the budget for a family trip to Asia and especially to China.

In April 2001, Christensen, her former husband, and her son and daughter, then 12 and 15, flew to Beijing during the tense week when China was holding an American spy plane and its crew. The trip took them across China to the desert caves of Dunhuang and the remote city of Urumqi. “I was immediately engrossed by China,” Christensen wrote in the Introduction to the Encyclopedia of China, “I could feel the energy and determination of the whole population. I relished the conviviality and humor of the people I met, and the sense of possibility I felt in the air along with an intense focus on what lay ahead—it was all irresistible. As an environmental author, two of whose books have been translated into Chinese, I was acutely aware of the influence, for good or ill, that China would have on my own and my children’s future.”

Late in April 2001, Christensen returned to Great Barrington, Massachusetts, where the pretty Main Street was lined with flowering pear trees and tubs of fresh-faced pansies, and quietly set out to change the way the world thinks about China. She had become convinced that every American needed to know more about China’s history, culture, and language, its jokes and popular culture, its politics and economic system. She thought we needed to understand Chinese perspectives in every area—business, education, politics, innovation, and personal life—in order to be ready for the 21st century.

She got a stepladder and outside the offices of her newly formed company, Berkshire Publishing Group, she stapled up a set of posters for the Beijing Olympics bid that was then in progress. In July, the International Olympic Committee announced that Beijing would be the host of the 2008 Games, and Christensen began her work in earnest, with the 2008 Games as the first lap in what she knew would become a lifelong adventure.

Christensen had already made a specialty out of working with people of different cultures and belief systems, working, for example, with the Islamic Countries Women’s Sports Solidarity Council in Tehran, Iran, the year before. But she had no idea what she was taking on, in announcing that she would publish an Encyclopedia of China. Some people were openly skeptical. Later, she realized that their skepticism had been a gift because it made her more determined to do what so many people thought was impossible.

In fact, there is a much bigger Encyclopedia of China—in Chinese. Encyclopedias have a long tradition in China and the Berkshire Encyclopedia of China even has an article about the most famous of them: The Yongle Dadian, or Great Compendium of the Yongle Reign, had over 11,000 volumes and was completed in 1408. The Table of Contents was 60 chapters long. There is a modern Encyclopedia of China in Chinese, first published in 1978, and Christensen is in conversation with the Beijing publishers about cooperation on a bilingual co-edition. But the Berkshire Encyclopedia of China still comes first among English-language publications in size and scope, and ambition. It is almost certainly the first reference work on China to have articles on blogs and social networking, as well as on traditional topics such as porcelain and the Han Dynasty, and on current issues such as the automobile industry and food safety.

The Encyclopedia of China was launched on 1 May 2009 in New York City at program organized by the National Committee on US-China Relations, which Christensen was made a member of in 2007.The speaker was Simon Winchester, author of The Professor and the Madman, the story of the Oxford English Dictionary, and a neighbor of Christensen’s in the Berkshire Hills. Winchester spoke about Joseph Needham, creator of a famous reference series called Science and Civilisation in China and the subject of his latest book, The Man Who Loved China. One of Needham’s teachers had told him to “think like an ocean,” and this, Winchester explained, was one of the things that helped him take on his monumental and controversial project. “Karen is an ocean thinker, too,” Winchester said.

Ocean thinking is what the world requires, because our children face unprecedented challenges, and opportunities. China is central to our future, environmentally and economically. “We can’t afford to be ignorant any more, or to imagine that it’ll be okay because they’re learning English,” says Christensen. One of the moments she treasures from the family trip in 2001 is when she and her son Tom were walking through a crowded market and he said casually, “Next time we come to China….” They talked about it. “We’ll speak some Mandarin.” “We’ll know about hiring taxi drivers.” “We’ll stay for longer.” China had become part of his world. And China has become part of his future. Tom went on to study Chinese and spent several summers there. In 2009, after graduating from college and working for a year on the Berkshire Encyclopedia of China, he is heading back to China to work.